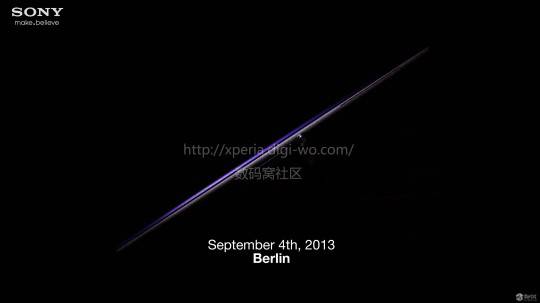 A new Sony "Honami" leak has been unveiled by the Chinese website CNBeta, that shows it will be purple at least on the sides (the back may not be), and it also confirms what has been rumored for a while, that the Honami will be officially announced at the IFA event or in during that period. The September 4th date also coincides with the date set for the Samsung Galaxy Note 3.

Ever since CES this year, it's been obvious that Sony has set Samsung in their crosshairs as the competitor they need to beat. It may be because they used to be where Samsung is right now, decades ago, and they want to restore their own former glory, but also because Samsung is everyone's #1 competitor right now, and the one they're striving to beat.

The Sony Honami may not be a direct competitor to the Galaxy Note, but their 2 markets should overlap quite a bit – the market of people who care less about the size differences between the 2 devices or about the fact that Note 3 will have an S-pen, and more about which one has the best specs and is better as a "smartphone".

In this market, I could see Sony beating Samsung and gathering more buzz if and only their rumored 20 MP camera with a 1/2.3" sensor really is amazing, and a big difference from what Samsung will have (probably just Galaxy S4's camera). Sony is rumored to use the Sony G lenses from their point and shoots in this smartphone, along with software and algorithms from them, and also the BIONZ image processor.

So it looks like Sony is really trying to fit one of their higher-end point and shoots into a smartphone. Then, if another rumor is true, you should be able to buy an extra camera attachment for it with its own image processor, to make your Sony Honami as good as the latest and super high-end Sony RX100 II point and shoot.

We're only 4 weeks away from finding out just how good this camera will be, even though I think we could make a reasonable bet that it will be the best smartphone camera at least from the Android market, this year (unless that "insanely great" next-gen Nexus camera can trump it).