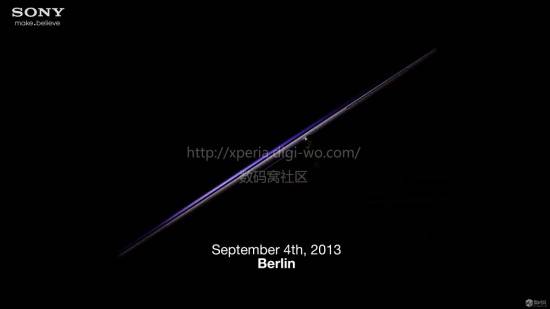 IFA is looking to be a bit more exciting than it has in previous years. Last year, the only real news that we got out of the event was the Galaxy Note 2 and Galaxy Camera, both from Samsung of course. Earlier this week, we got invitations from Samsung about their Unpacked: Episode 2 event on September 4th for what we believe will be the Galaxy Note 3 unveiling. Now we are seeing posters from Sony that looks to show they are holding their event on September 4th as well in Berlin. Which we are expecting them to announce the Sony Honami. Which we’ve heard as the Xperia i1 and the i1. Since we aren’t sure if they’ll be ditching the Xperia branding from their high-end devices or not, like LG did with their Optimus brand.

The new Sony Honami is rumored to carry a pretty big display, more than 5-inches. Along with a Snapdragon 800 processor on boar, and a 20 megapixel camera that comes with a superior G lens. So it’s looking to compete with the likes of OPPO’s N Lens devices and the Galaxy S4 Zoom from Samsung. It’s going to be a pretty unique device, and it appears that IFA is going to be more exciting than CES and Mobile World Congress was in the beginning of the year.

It’s not quite official yet, but it’ll probably be official in the next few days that this event is taking place on September 4th for Sony. They could also announce another device, we don’t know for sure yet. But we’re definitely looking for the Honami to be announced.

This year, Sony has been producing some pretty nice devices. They started with the Xperia Z and ZL at CES, which were pretty good devices until Qualcomm announced their Snapdragon 600 and 800 processors a few hours. Basically making the Xperia Z and ZL outdated within hours of the announcement. Then this summer, Sony announced the Xperia Z Ultra, which is a 6.44-inch 1080p waterproof phone. Oh it’s a huge phone too. Hopefully Sony will continue to impress us with the Honami.