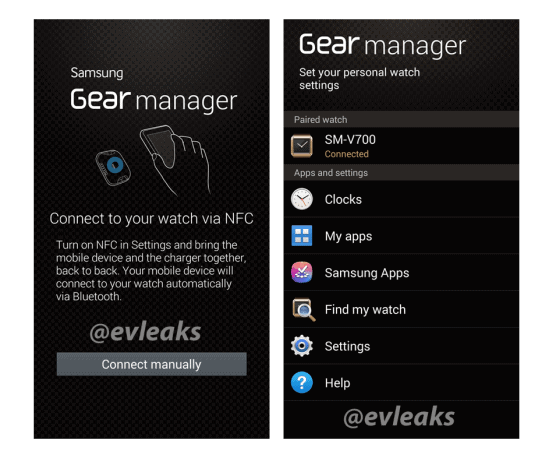 Want more concrete leaks? Well that's what we have here. @evleaks has just leaked out a couple of screenshots for the new Android app that will manage your Samsung Galaxy Gear. Aptly name 'Gear Manager'. One of the first things we noticed is that it confirms the model number of the Galaxy Gear. That is SM-V700. The app itself will give you the option to pair your phone with the Gear automatically via NFC or via manual Bluetooth setup before getting into the personal settings.

Inside the rest of the options we have options to change the clocks, manage the apps, check out and manage Samsung apps, Settings, and help. There's even a 'Find my Watch' option in there. Which I'm sure Apple is going to have something to say over the name 'Find my iPhone' anyone? The app appears to be able to do just about everything we'd expect an app for a smartwatch to do. No real surprises here.

There's only a few days left until Samsung's event in Berlin. So we're sure this weekend will be full of leaks and rumors about the Galaxy Note 3 and Galaxy Gear, so we'll be sure to keep our eyes out for everything. Surprisingly, I'm actually starting to get excited about the Galaxy Gear, even though I'd probably never use it. It does mark the beginning in the next generation of consumer electronics, and I'm sure it'll sell faster than Google Glass will, especially if the price is right.

We've already seen the specs of the Galaxy Gear, with a subpar 10-hours of battery life. It's supposedly going to have an OLED display, so it should look very nice. I have a feeling that 2014 is going to be the year of the smartwatch, and Samsung's getting an early jump at IFA with theirs. Although Sony and Pebble have had their's out for quite a while now. How many of you are fans of smartwatches? Would you buy the Galaxy Gear? Let us know in the comments down below.