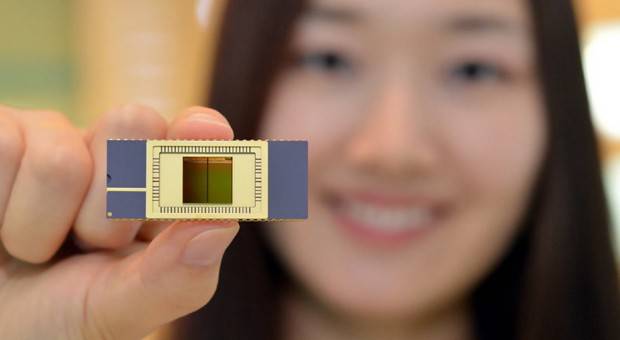 Tired of the paltry 16GB internal storage that's included on nearly every smartphone nowadays?  Want more room for your stuff without having to buy an additional SD card and cause mass confusion when saving things?  You're not alone, and it seems that Samsung might just be here to help you with that.  Currently many devices are stuck with 16 to 64GB of storage because the technology to make more in such a small space just wasn't there.  With current chip production technology, memory chips are manufactured on a 2D plane.  This only allows for so many chips to be able to fit in a small memory card, and as such makes it extremely difficult using this method to increase storage.  Samsung has taken a new approach though, and has now started stacking chips vertically in up to 24 layers to achieve a maximum 384GB storage capacity without increasing end-product size.  Right now Samsung's first release will be a 128-gigabit chip, which is 16 gigabytes of data.  As Engadget is reporting, Samsung should be able to scale this technology rather quickly, and we should see the full-scale 384GB models before too long.

Current memory technologies have big problems when it comes to reliability and speed, particularly at higher densities.  The more space you stack on a cell, the more unreliable data transfer becomes, and the slower the data moves from point A to point B.  Samsung is claiming this new memory technology is 2 to 10 times more reliable than previous types of memory technology, meaning you probably  won't be seeing as many dead SD cards when these become available.  Samsung is also claiming that these new chips are twice as fast as the old ones, which is something everyone can get behind.  One of the biggest bottlenecks in performance of any modern electronic device is the memory transfer speed; you'll notice this most if your phone uses slower internal memory and you're trying to do something while updating apps from the Play Store.  Often your keyboard will freeze up for a second, clicks won't be registered, and other strange issues arise when a manufacturer doesn't use quality memory.  Let's all hope for less crappy memory in phones out there, because there's nothing like an annoying experience to turn a customer away from an otherwise perfectly good product.  Since Samsung sells its many products to other companies all over the world, don't expect this new innovation to only make its way to Samsung's newest devices either.