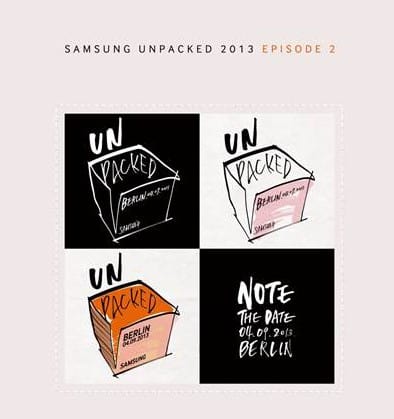 If the Galaxy S4 is Samsung's flagship, then the Galaxy Note is their other favorite son. The Galaxy Note line has quickly gone from being a niche product to a mainstream seller for Samsung and we're sure that this year we're going to see the best Galaxy Note smartphone yet. As Android Central is reporting, Samsung has scheduled an event for September 4th in Berlin. Astute readers will know that the 4th is the day before IFA kicks off in Germany, and it's also been the time of year that Samsung introduced the original Galaxy Note and the Note II.

It stands to reason then, that this year we'll be seeing the Galaxy Note III and we've certainly heard enough about it already. From there being more than one model, to different screen sizes, we've heard it all for the Galaxy Note III already and with a month still left to go, we're sure some more info come leaking out as well. So far, all signs are pointing to a device in the 5.7-5.9-inch range for display size and we're sure that the same improvements made with the Galaxy S4 will be applied here. As for what's rumored to be at the heart of the Galaxy Note III we've heard that Samsung is to use their Exynos CPU like they did with the Note II or even the powerhouse Snapdragon 800 that's used in the Xperia Z Ultra.

There's a strong possibility that Samsung is looking to expand the Note range as well, with the Note 8.0 having launched earlier in the year, it's about time they refreshed the Note 10.1. Whether or not Samsung has something else in store for us is yet to be seen but, we're sure it's something good.

Interestingly, Samsung is holding an experience event in New York City on the same day, which suggests to us that they're spending a little bit more money this time around than they did with the Note II. Which can mean only one thing: soon, we'll be seeing the Note III everywhere.

We'll have all the news come September so, be sure to keep us mind if you're a big Galaxy Note fan!