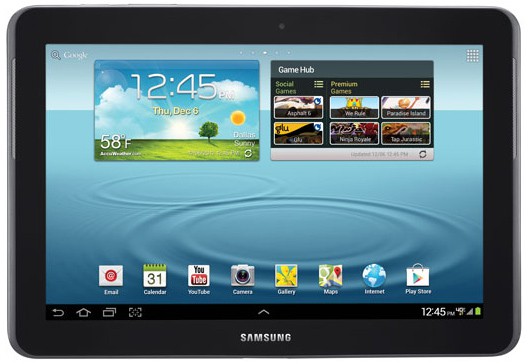 According to Zauba's shipping documents, a Samsung tablet featuring Intel's Bay Trail tablet chip is in the works, and it's possible it will dual boot both Android and Windows 8.

Just like Tegra 4, Atom "Bay Trail" is not really a "mobile chip", but a "tablet chip", which means you won't be seeing it in smartphones. Intel has a downgraded version prepared for smartphones, called "Merrifield", for the first half of 2014. Bay Trail most likely going to have around the same performance as a quad core Cortex A15, although it depends on its base clock speed, and it's very hard to know from benchmarks, because Intel's chips are going to take full advantage of the Turbo Boost speed, but that Turbo Boost won't be used much in real world scenarios, because it will surpass its TDP number, and then will be forced to throttle to its base clock speed.

So Intel could very well be making a 1.5 Ghz base clock chip, that goes up to 2.5 Ghz with Turbo-Boost, and win all benchmarks, but then is actually slower in say gaming or some other processing intensive app, because it won't sustain that 2.5 Ghz speed for too long, without being forced to throttle and go back to its base clock speed, so it doesn't overheat.

The GPU, even though it will be based on the Sandy Bridge GPU, will have much fewer cores than the notebook version, and will probably be behind GPU's like Adreno 330, Mali T628 and Apple's A7X.

But why is Samsung going with Intel chips this time? There are several reasons. The biggest one might be because they actually want to release a tablet that dual boots both Android and Windows 8. Unless they are using Windows RT, then they are forced to use an x86 chip for Windows 8. Android obviously works very well on ARM, and can work almost as well on Intel's chips, too, although it may face some compatibility issues with some native apps that aren't supported on x86, or Intel's emulation might slow some down a little, such as games. But for the most part it should work well. Windows RT on the other hand can't use x86 programs at all.

Another reason could be that Samsung is facing some challenges with its own Exynos chip this year. I'm not sure how much of a factor this played, though, because Samsung is rumored to have fixed some of the issues, by going back to Mali GPU's and by improving the drivers for the big.Little architecture. Next year, Samsung is rumored to launch its own custom ARM-based CPU core, just like Qualcomm, Apple and soon Nvidia, too.

I have doubts that this dual-boot strategy is going to work, because the markets are not really compatible. If you want Windows 8, then you probably don't care about using Android on it at all. If you want Android, then you'll be paying at least $100-$200 more at retail for the same specs, because of the Windows 8 license cost.

With KLP, I think Google will put a lot more focus on taking on Windows with Android all by itself, and starting to promote it on both tablets and PC's as a replacement for Windows, to "normal" customers, just like they do with Chromebooks which are even simpler and have fewer apps than Android devices. They just need to optimize the interface a little more for a notebook form factor to make it work.