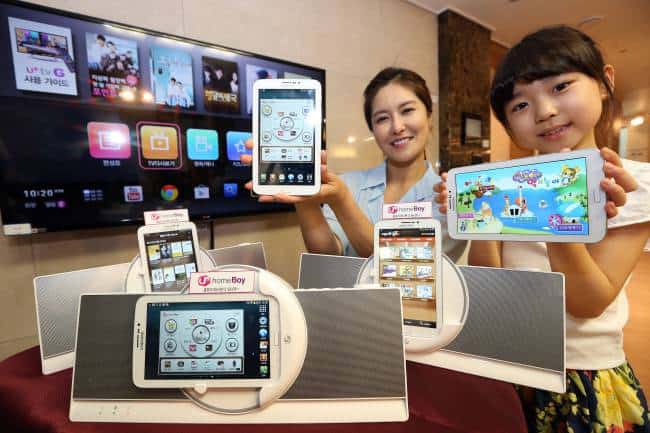 Looking to get a network-enabled Galaxy Tab 3 in South Korea?  Looks like you might just want the Samsung homeBoy if you're using LG's U+ network then.  No that's not a typo, this is the same LG that's been trying to topple the Samsung Android machine for some time now, and it has its very own cell network in the home country of South Korea. As discovered by Android Beat, the homeBoy doesn't just seem to be a rebranded Galaxy Tab 3, rather a specialized product launch for Samsung that totally integrates with the U+ network to give you features the Tab 3 doesn't have.  For one, there's a nifty dock to plug the homeBoy in to that swivels and sits nicely on a countertop.  Since this is part of a connected home system, it makes sense for such a dock to exist and be as central as the kitchen or another counter in your home.  You can even use the homeBoy to monitor CCTV when you're not at home.  Just position it in a good spot and access it wherever you are via the LG U+ network.  If motion is detected you can even have it message you to warn of possible intruders.

When you're at home with the homeBoy you'll have access to over 50 TV channels via the 7-inch tablet and some special LG software, as well as movies, music and ebooks. Monthly subscription fees for this service range from 16,000 to 20,000 Won.  Right now LG doesn't have a tablet to call its own, which is likely why it's paired up with Samsung for a rather interesting alliance.  Of course this will change soon when the LG GPad launches, but until then expect Samsung's homeBoy to be integrated and sold with LG's services.  This will be part of a new connected home platform that LG is launching, and like many things is starting in LG's home country of South Korea.  Will it make it outside of South Korea?  Highly unlikely, but there's no word of that just yet.