Smartwatches and wearable devices are the next big thing in consumer technology. Pebble and Sony already have solid smartwatch offerings. There are a slew of others as well. Samsung is looking to jump in to the game with the Galaxy Gear watch that is expected to be announced on September 4th.

We’re getting some more information on the Galaxy Gear smartwatch today, courtesy of SamMobile. It looks like the Gear watch will initially launch with four different color options, with a fifth color option being made available one week after launch. In the first week of the smartwatch being available, users can pick one up in black, white, grey, and orange. Then in the second week Samsung is planning on introducing a “white gold” color. The white gold option may not be available everywhere that the smartwatch is sold. It may be a regional exclusive, but we don’t have all of the specifics on that yet. Samsung will probably release additional colors in the future. 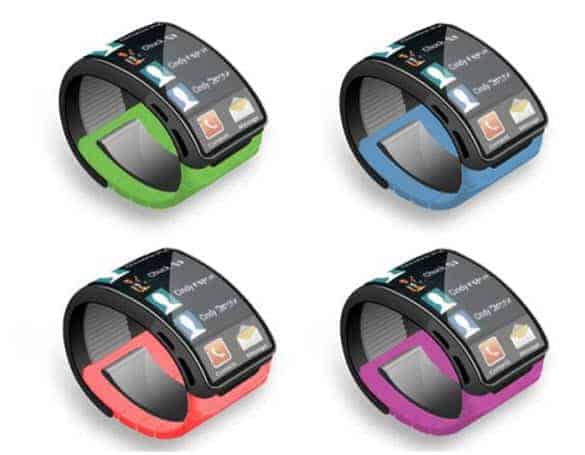 The Galaxy Gear smartwatch should begin shipping in late September or early October. The initial four colors should be made available in “week 39” which means it should be released the week of September 22nd. That doesn’t mean it will be available globally, but Samsung definitely wants the watch to be available in time for the retail selling season this year.

The Samsung Unpacked event scheduled for September 4th is also likely to be when the Galaxy Note III is announced. The Galaxy Gear will be announced alongside the Note III. It is designated as the SM-V700, and is designed specifically to work well with the Galaxy line of smartphones and tablets. The Gear could also have a flexible display. Recent patent filings suggest that the smartwatch will have a wide-screen and wide band. It will have a touch sensitive Back and Menu buttons, a built-in speaker, USB port, and could have a built-in microphone for voice controls or even phone calls.

The announcement for the Galaxy Gear is right around the corner. We’ll have all the details right here for you. What do you think about wearable tech, specifically smartwatches? Is a Samsung smartwatch the one that you want?