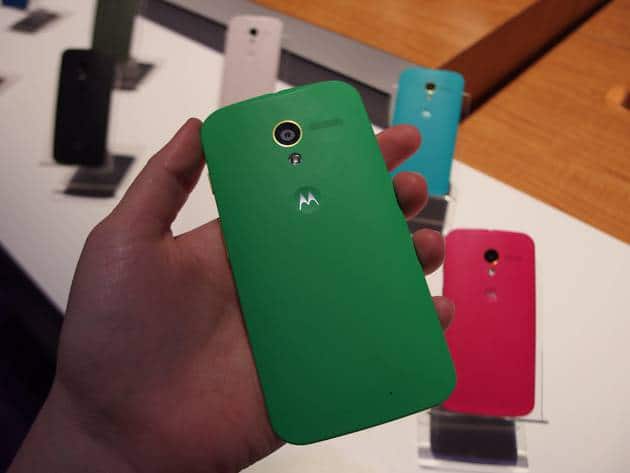 Isn't that nice to see "Starting at $189 with a 2-year contract" when we talk about Canadian phones and carriers? For the longest time they've been using 3-year contracts in Canada, which lead to many people just buying the phone outright. Especially those that change phones often, like many of us here at Android Headlines. But now, thanks to some regulation changes, Canada's carriers are switching over to 2-year contracts, slowly and unwillingly, but they are changing over. Which we've had here in the US for a few years now. Even though some carriers are opting for no contracts, the majority of US wireless users still have a contract.

Now onto the Moto X. Last week, Motorola finally announced their newest flagship phone that is primarily only for the US, but is also available in Canada. Of course, it's a Rogers exclusive. The Moto X is made here in the US, in fact it's made in Fort Worth, Texas. The Moto X is also customizable, where you can change the backplate color (even get some wood), change the colors of the accents around the power and volume buttons and even engrave it. The Moto X also features:

As we said the Moto X is an exclusive to Rogers up in Canada. It'll also be available either late August or Early September. That probably has to do with carriers setting their own release date for the phone. We are not sure if Rogers is offering the customization choices that AT&T is here in the US. In fact, AT&T has an exclusive on the MotoMaker for a month or so. But Verizon has announced they'll have it down the road. So I'm assuming Rogers will as well.

The Moto X is available now at Future Shop for Pre-Order starting at $189.99 for the 16GB version, which is on a new two-year contract. There's also no price for those that want to purchase the device outright, but we're going to assume it's under $600. The Moto X will also probably have a locked bootloader on Rogers. We've heard that it'll be unlockable for the Sprint, US Cellular and T-Mobile versions in the US. But we've heard nothing about the Rogers variant, so we'll assume it's locked until we learn otherwise. There will be an unlocked "North American variant" of the Moto X as well. Which should theoretically work on Rogers up North.

So, how many of our Canadian readers out there are planning on pre-ordering the Moto X from Future Shop? Be sure to let us know in the comments below. Also let us know how you like the Moto X once you receive it later this month.

Don't forget we are giving away a Moto X, and it's open to US and Canadian residents!