So, it’s been four official days since the release of the ASUS Google Nexus 7(2013), some of the lucky few even got their tablets days early when some retailers started selling their stock on the 27th of  July. After using this thing for the last week, I have found that I truly do love it more than the original Nexus 7 in every way. There are some things that could be considered semi major overhauls and some things that others would just say are minor tweaks and improvements from the original. First off the Housing is completely different from the last, and its thinner and lighter. The new nexus 7 is just 8.65mm thick and sports a smooth plastic backing, and weighs in at just over 10 ounces. When compared to the old nexus 7 from last year with its rubberized back and slightly thicker profile and slightly shorter display, the new nexus 7 is definitely a comfortable tablet to hold especially for extended periods of time. This time around ASUS opted to scrap the Nvidia quad-core Tegra  processor for a 1.5 GHz Qualcomm Snapdragon S4 pro. The display has been upgraded too. The new nexus has an all new 1920×1200 display with 323ppi . It really makes a huge difference when you compare the screens from both. Just like all the nexus devices out there, nexus 7 2013 comes available in 16GB and 32GB versions, and has 2GB of ram for all those long gaming sessions. 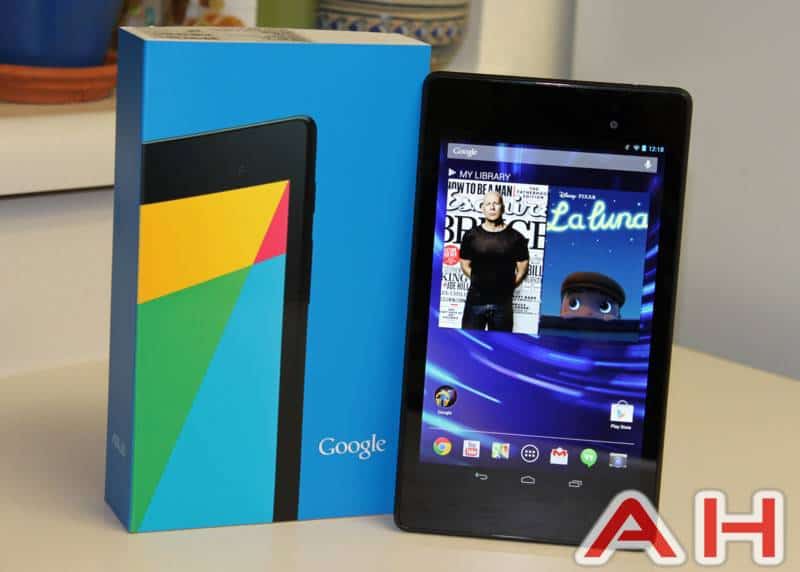 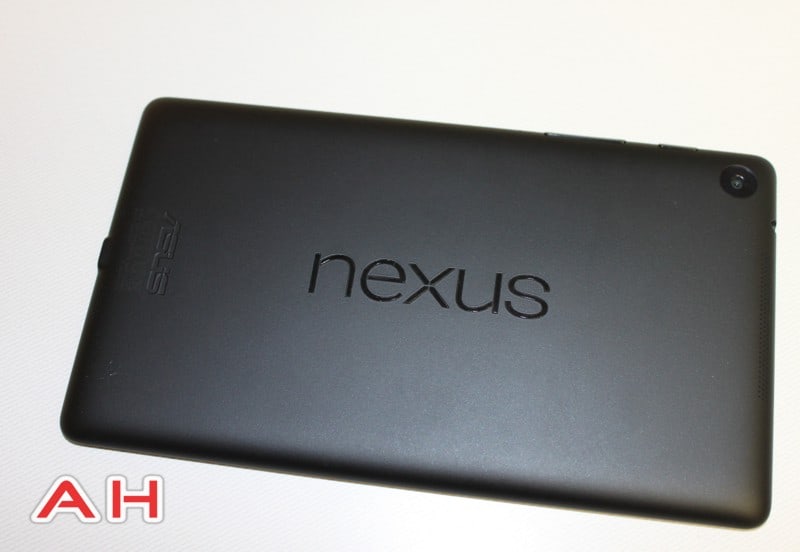 The design of the new Nexus7 isn’t all that much different, but it’s certainly different where it counts. I mentioned it a bit earlier already, but the tablet is just 8.65 mm thick which is thinner than last year and that makes it more comfortable to hold for longer periods of time. In addition to it’s thinner physique, the body is made of a smooth backing instead of the rubberized texture with dimples from before. I enjoyed the look of the old nexus 7 tablet, but i really love the new sleeker design. 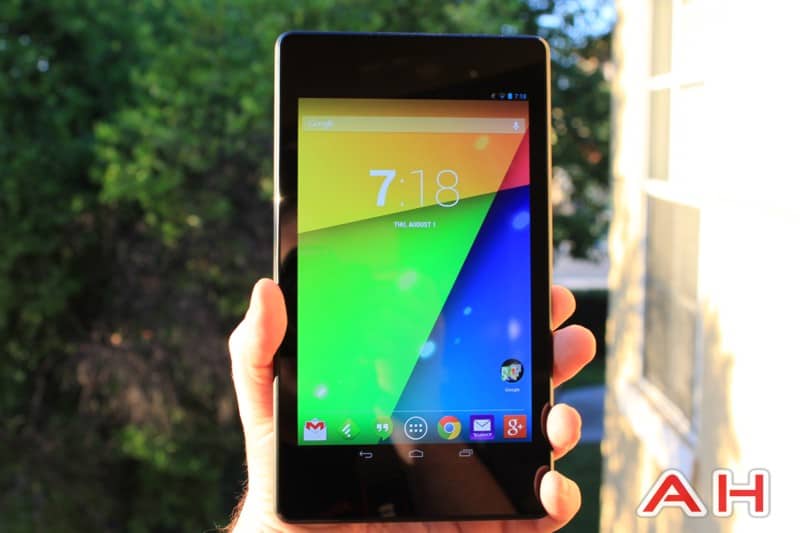 This year’s screen is really an improvement. It’s still an IPS display, but upgraded to full 1080p HD. The 1920×1200 HD IPS display comes in hot and ready to dazzle with 323 PPI. The resolution is insanely crisp, and what better way to protect that beautiful face than with scratch-resistant Corning gorilla glass. I wasn’t sure what to expect when I opened the box and powered it on, but i was completely blown away at how bright and sharp the picture was. 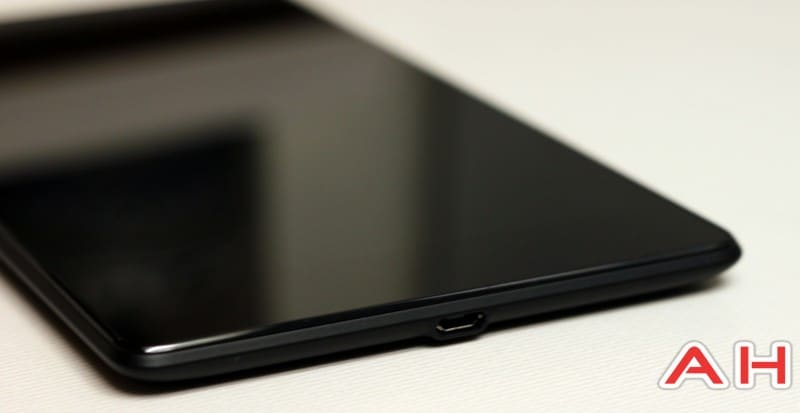 As we all should know by now, a nexus device is always going to be built with stock android baked inside. The new nexus 7 comes wrapped up with android 4.3 jelly bean and Google’s newest Android OS version to date.

The new nexus 7 comes packed with plenty of hardware goodies. Instead of the old Nvidia processor from last year, ASUS opted for the new Snapdragon S4 with an Adreno GPU. While this is a bit of hit to me and my love for games (it means i’ll have to miss out on some of those Tegra optimized graphics) the processor is every bit as good as the Tegra 3 and actually better. I have yet to come across any lag issues with this tablet and I don’t think I’m going to be running into them any time soon. I haven’t quite filled up all 32GB of space, but I have already loaded a myriad of large size games onto it and it still runs like a champ. 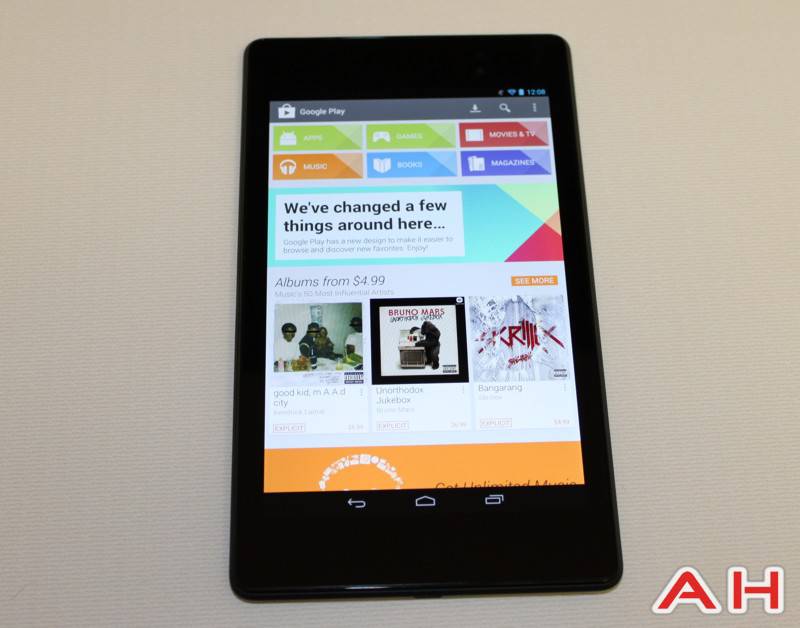 The new nexus 7 is built to play games. With the long hours that gamers sometimes like to log in mind, a vision of making the Nexus 7 even better for gaming came to fruition with this years addition to the portable gaming powerhouse. The lack of Tegra optimized specific enhancements is a tiny letdown, but the Snapdragon S4 pro CPU and Adreno 320 GPU do a wonderful job at fueling the intense memory hungry gaming stints we love. Speaking for myself, when I play games and yes even on the tablet, I sometimes play for hours on end. 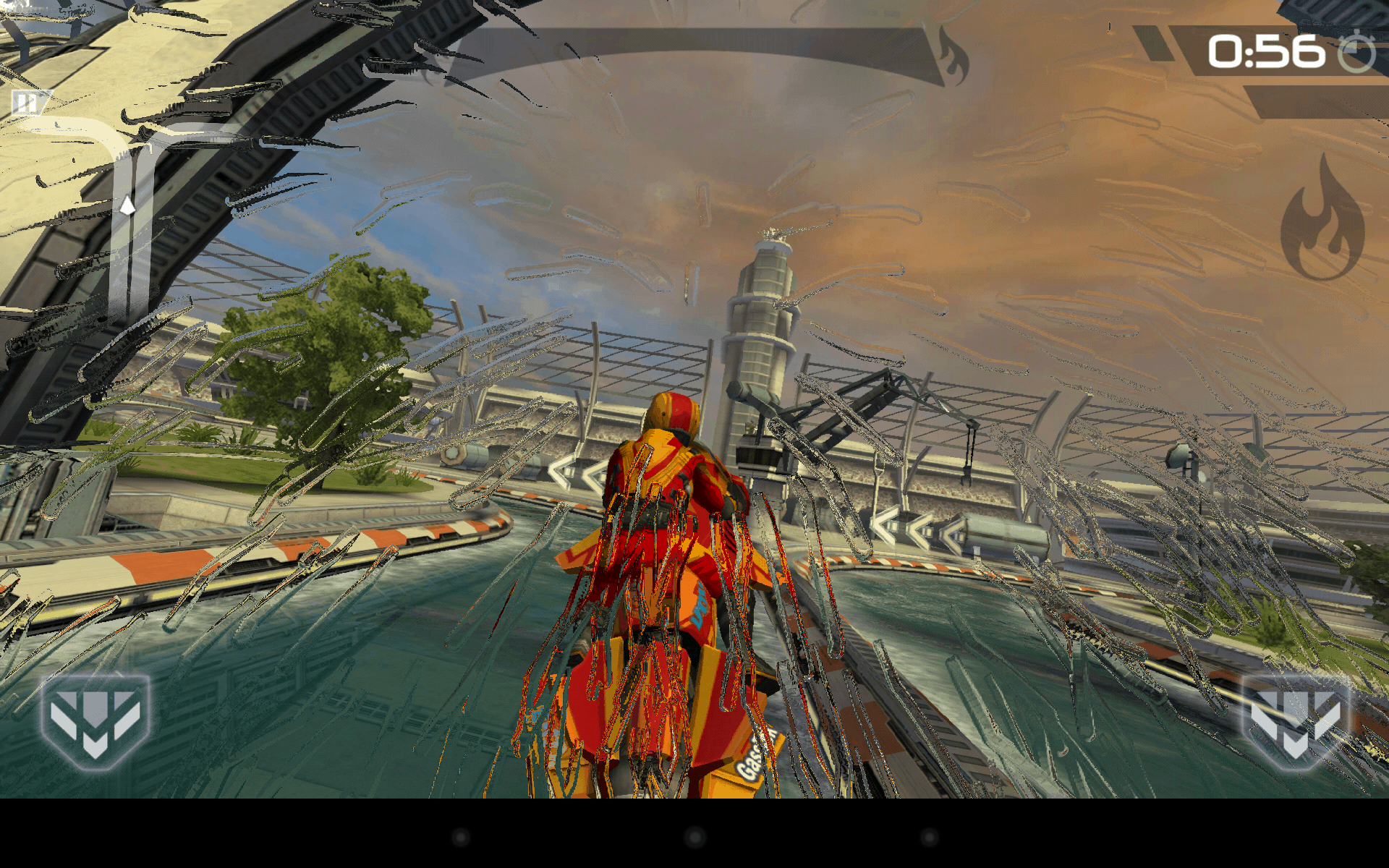 I’m a gamer, so this is certainly no problem for me. Graphics are handled near flawlessly, and the 2Gb of ram make gaming fluid and seamless. I have never enjoyed playing games on my android devices as much as I have on the new nexus 7. It’s lighter too, so it doesn’t get ridiculously uncomfortable to hold after a while. 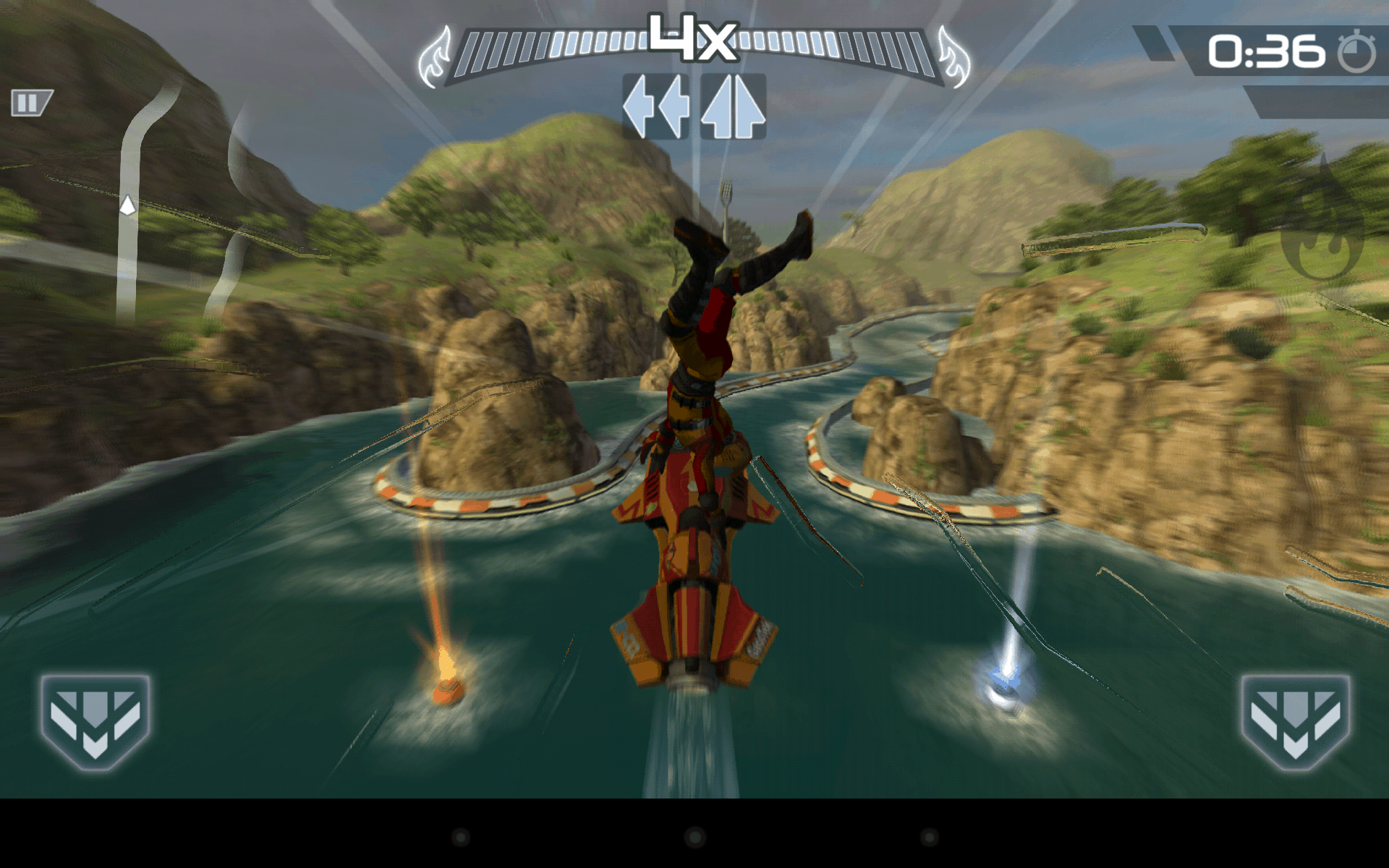 If you plan on getting this tablet solely for android games, you won’t be disappointed. In fact, you’ll probably be pleasantly surprised at how well games actually play. Once it sinks in that gaming performance is as fluid as could be, to truly immerse you into the world of your game, the surround sound speakers make whatever you’re playing feel like you’re part of the action. From one gamer to another, this is the way to go hands down. 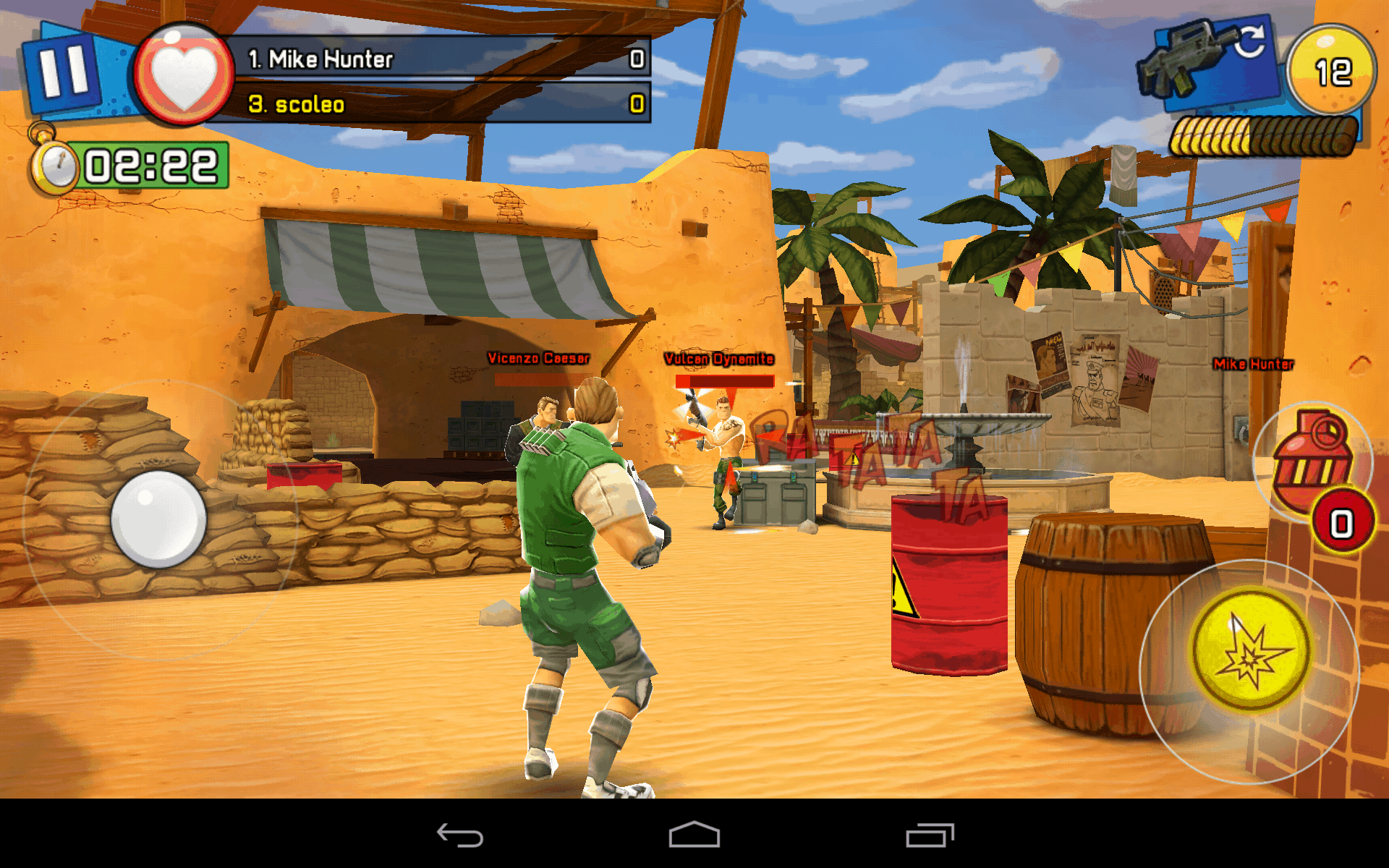 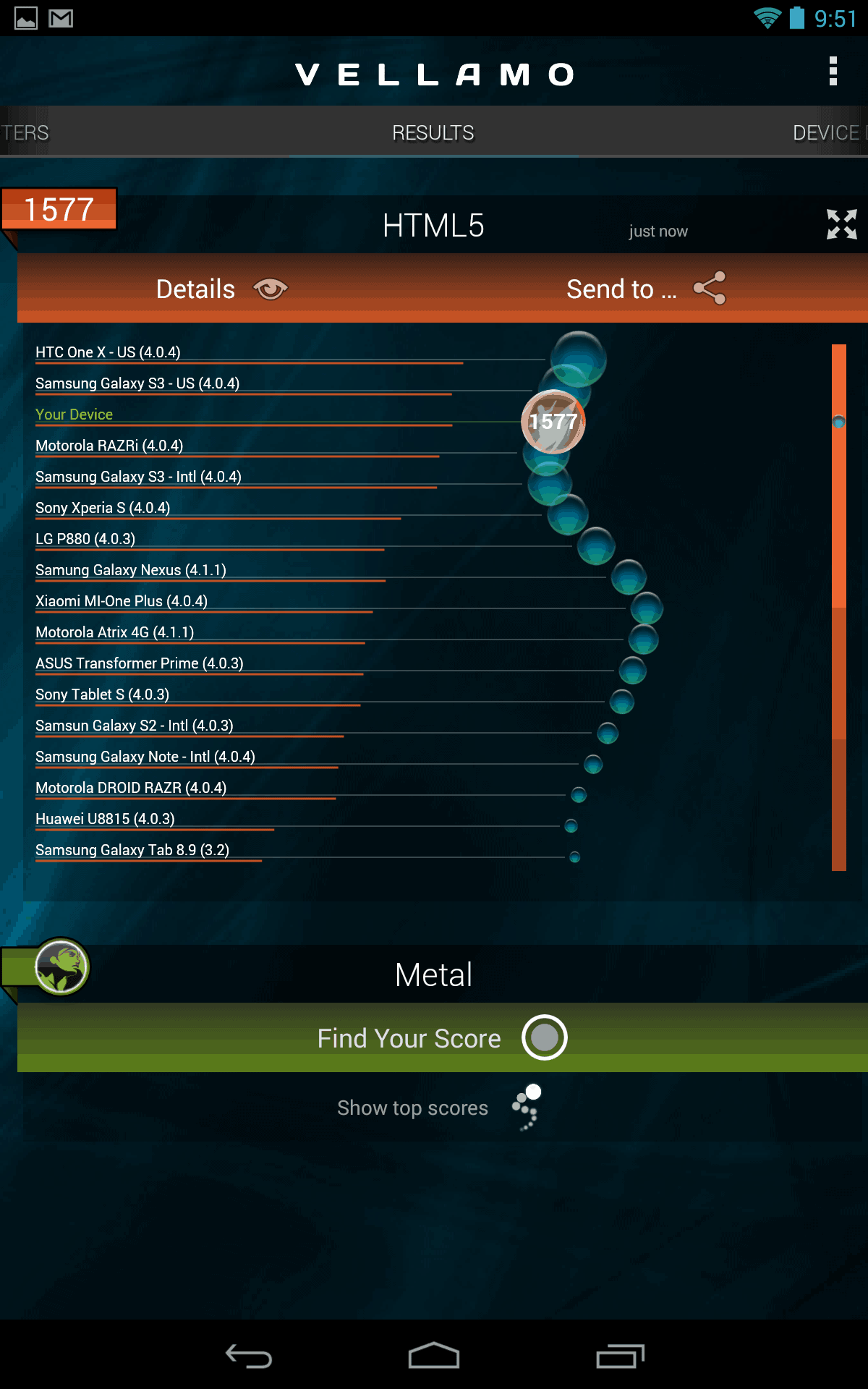 Vellemo is the benchmark app that we use to test a devices HTML5 and javascript capabilities. The nexus 7 didn’t score poorly by any means, but there were a couple devices ahead of it in the list when I ran it through the comparison. 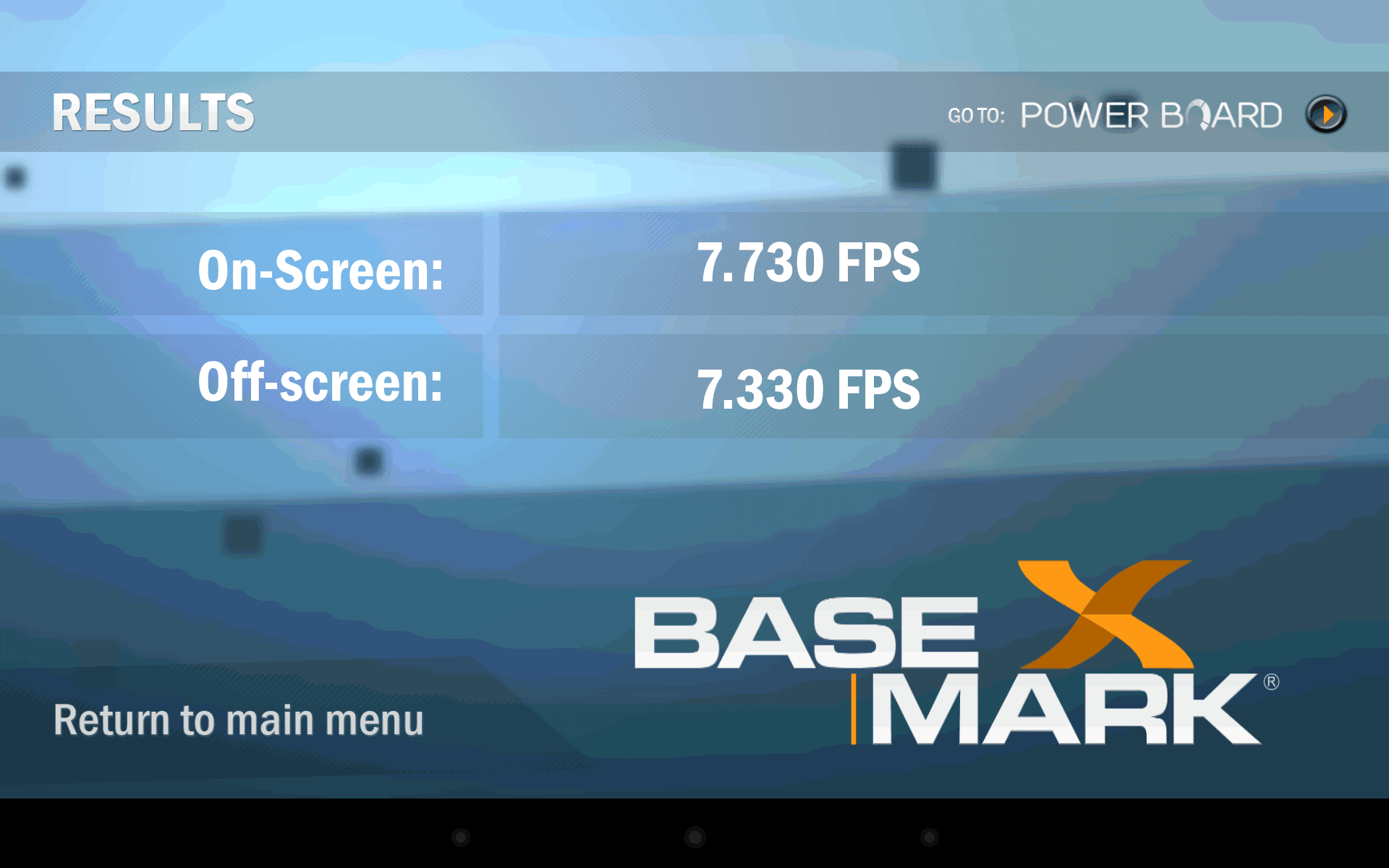 Basemark is the graphics benchmark. It tests your devices GPU to see how it can handle different types of graphical changes. The nexus 7 scored pretty high, and that’s to be expected for all the advertising being done at how well it plays games. 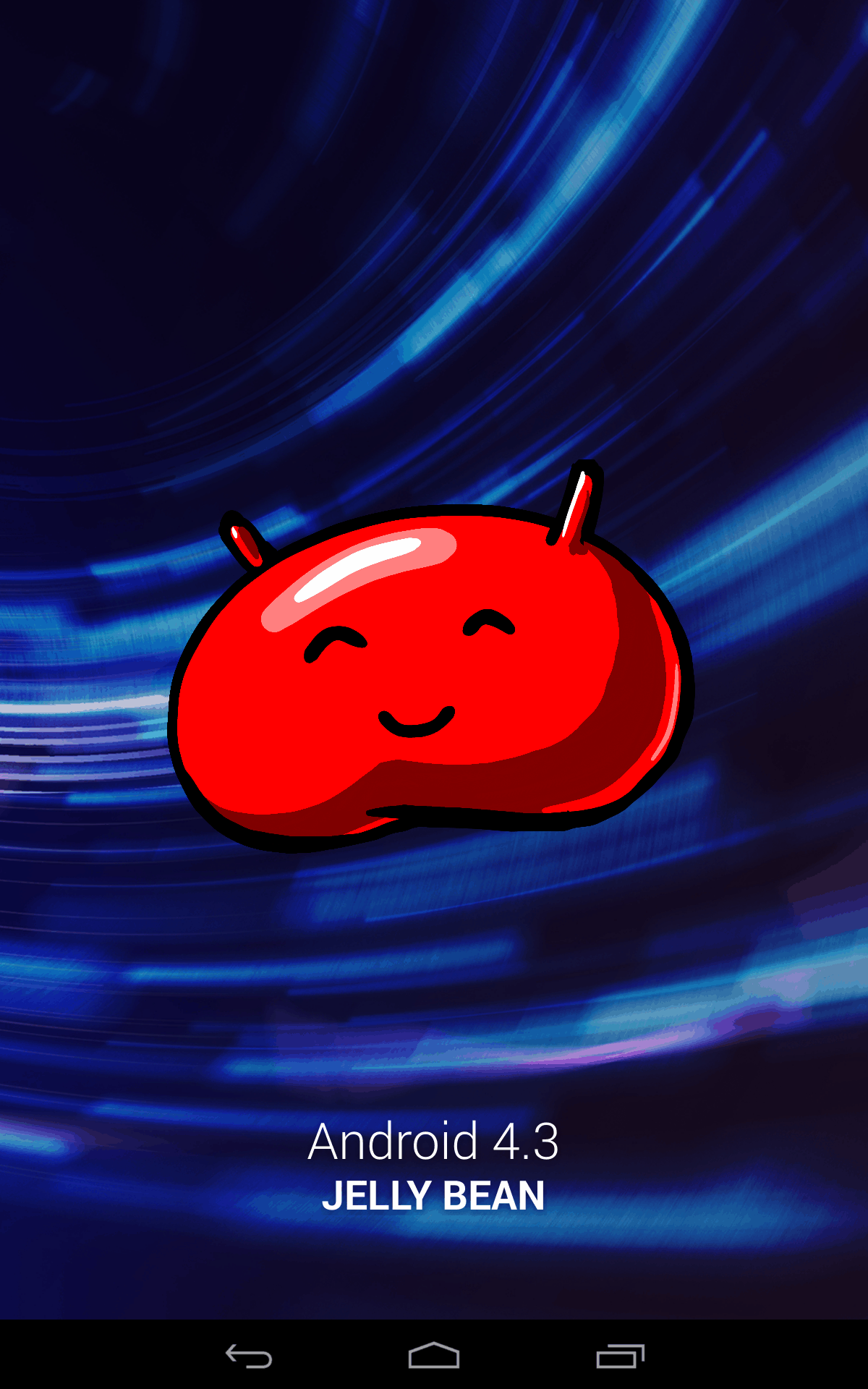 This is no secret, but the Nexus 7 2013 version comes ready to rock with Android 4.3 Jelly Bean and the newest Android version so far. 4.3 comes with more under the hood changes than anything else, with a tweak here and there on the top end that are actually visible. Google has added in their own version of a “Note” application called Google keep that allows you to post and take notes to remind yourself of your daily tasks. You can add these notes to the home screen in widget form or leave them in the app. You can write up a nifty little note or create a list item for checking off groceries and such, you can even use the voice recognition to speak your notes and there’s even a camera button to add photos to notes as well. Customization plays a small roll here in letting you tweak the color of the note if you so choose. Other changes to the software include some battery life improvement from the previous android version, trim support, Bluetooth LE, Always on WiFi, a new camera UI and restricted profiles in case you’re sharing your tablet with the kiddies. As you can see, no major changes were made but that doesn’t mean that the ones we have aren’t welcome as they are still improvements that will enhance the user experience. 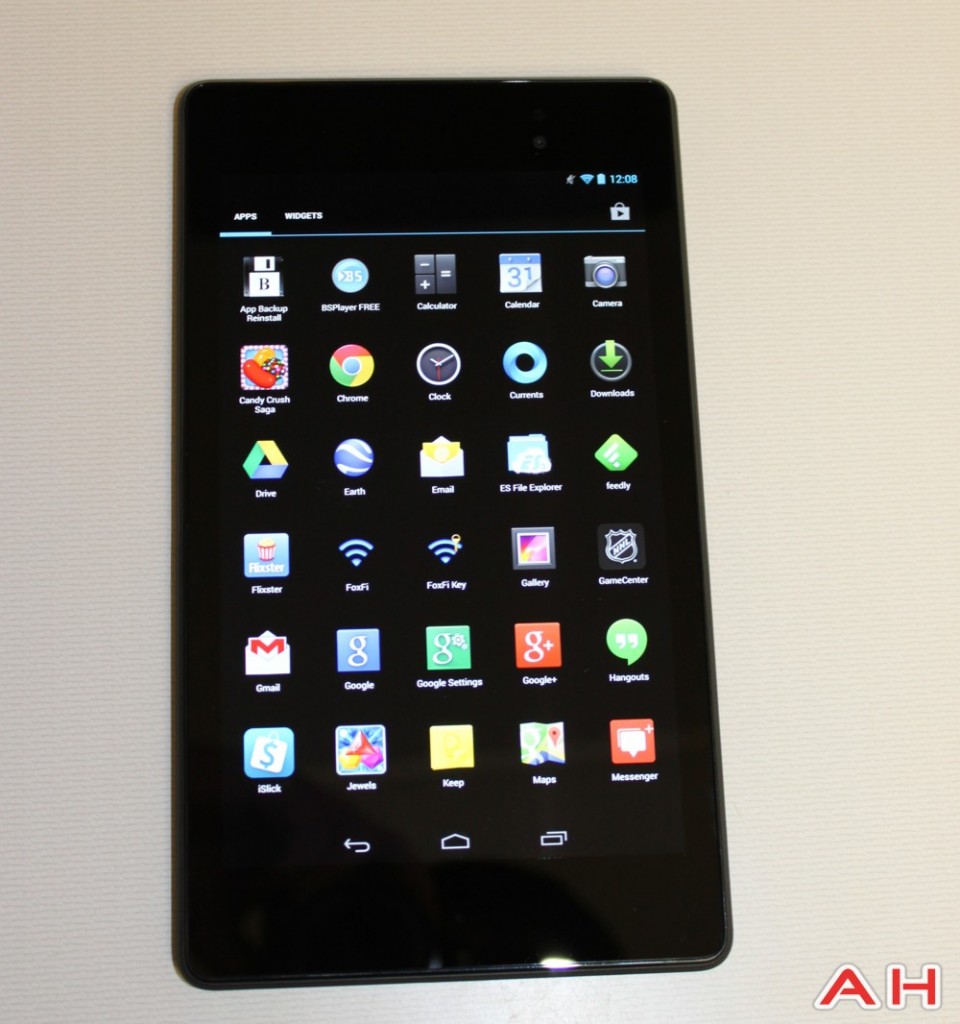 It’s a nexus, so there’s really no bloat. Just stock android love and the way it was meant to be enjoyed. You still get your standard Google apps and such, but most of those are welcome and people enjoy using them. No carrier affiliated applications means a cleaner user experience. 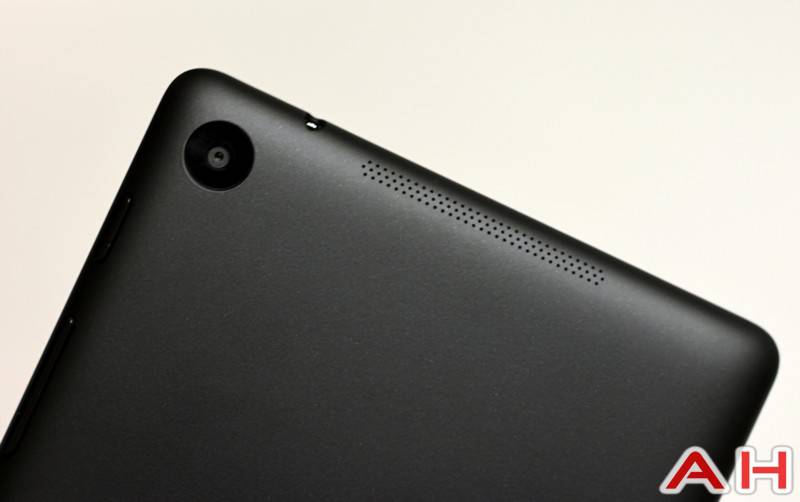 The sound on the new nexus is much better than the old. With two speakers on either side of the charging port at the bottom, and one long one up top (both on the rear) everything is louder and games and movies on the device are much richer. Quality is clear and crisp and packs a punch. There were numerous occasions where i had to turn it way down because I was playing Riptide GP 2 too loud and my girlfriend could hear it over the car stereo blaring. They by no means equal a home theater system but they will give users a cinema like experience with how loud and clear they are. The sound is a step up from before and you WILL notice the difference. The speakers are surround sound and powered by Fraunhofer, (they’re responsible for the creation of the popular Mp3 format) and the new technology they implemented here is designed to mimic having a home theater system to best of its ability. I was impressed. 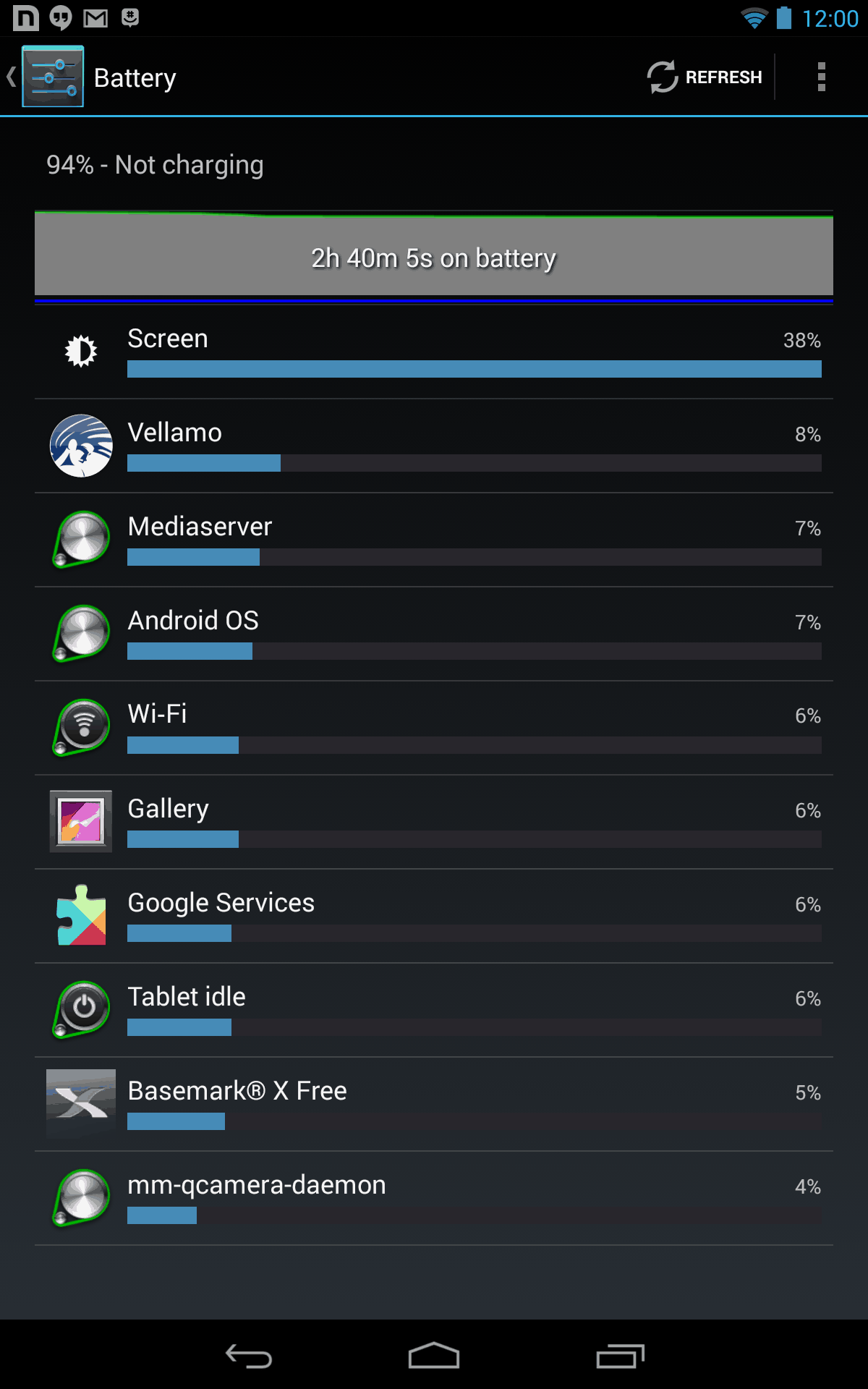 I wasn’t expecting the battery life to be much of a problem here, as I had no complaints about the original nexus 7 battery life and believed the new one could only improve. My suspicions were correct and it seems I can go a little longer with the way I normally use the device on the daily. 4.3 helps this cause of course with its battery life improvement. As you can see from the screens above i haven’t had much use of it since i pulled it off the charger this morning, but give it a few more hours and by midday you can expect to see some heavy usage on the battery from Riptide GP2 and The Respawnables so i can really test the limits of its longevity. In all, the battery is fantastic and I have no complaints. 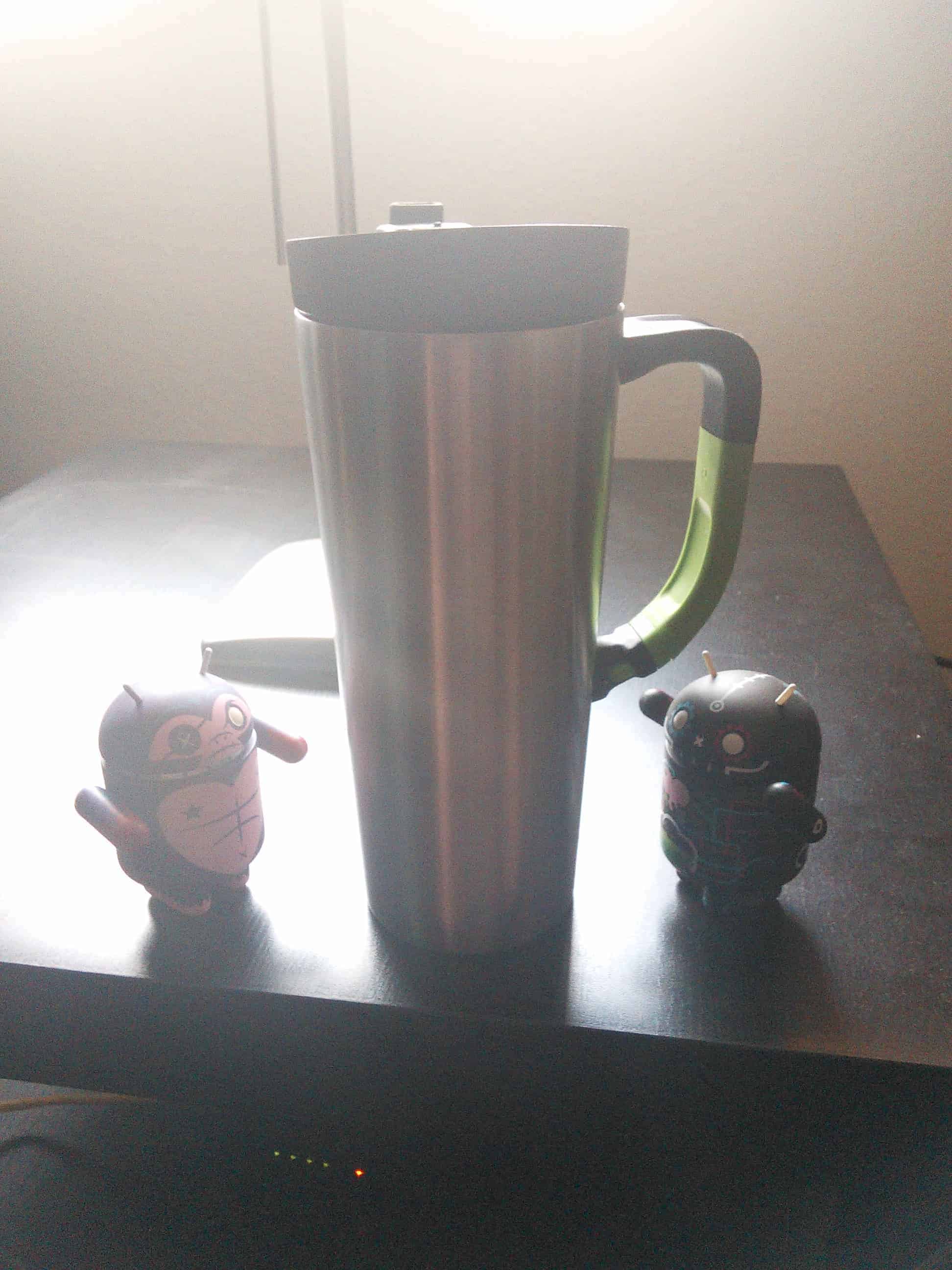 This is something we wouldn’t have had in a review from last year because there was no rear camera, or a camera app for that matter in the old nexus 7. This year though, Google has listened to the opinions of its users and built the 2013 version with a 5MP rear facing camera. I’ll be honest, the camera had nothing to do with me buying this tablet, and for most everyone else it won’t be a factor either. Still, it’s a nice thing to have if you’re in a situation where you need to take a photo in a pinch and this is all you have. The camera on the rear is new, but the quality isn’t great when compared to the likes of what’s on our smartphones. Once again, still nice to have. The pictures just seem a tad bit too grainy for something I could use often, but I will certainly use it some. 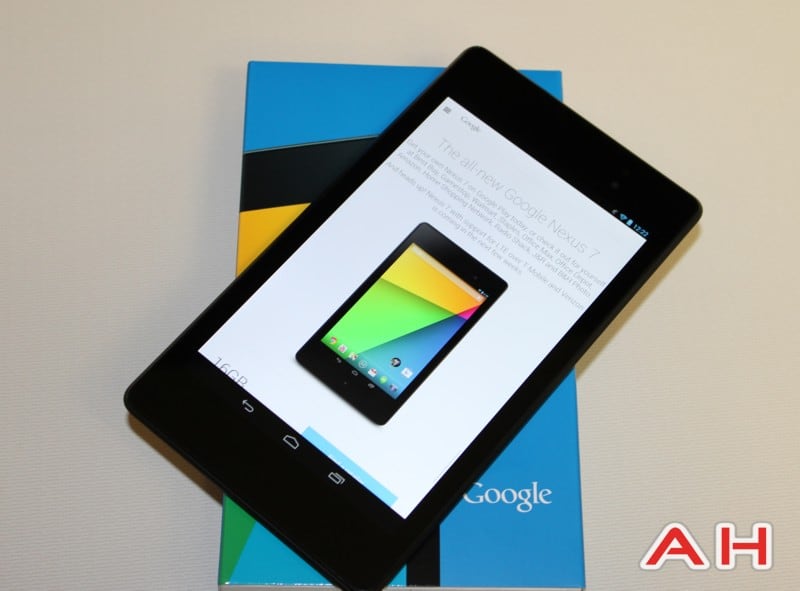 Of course we all know that right now the WiFi only versions are what’s available for the time being with the LTE version on the way very soon. Besides Dual-Band WiFi (2.4GHz/5GHz – 802.11 a/b/g/n), the new nexus 7 packs in Bluetooth 4.0, and NFC(naturally). I haven’t had the opportunity to use the Bluetooth yet, but the NFC is just as snappy as ever and the tablet stays connected to most WiFi signals I’ve linked up to without any issues or signs of disconnecting. 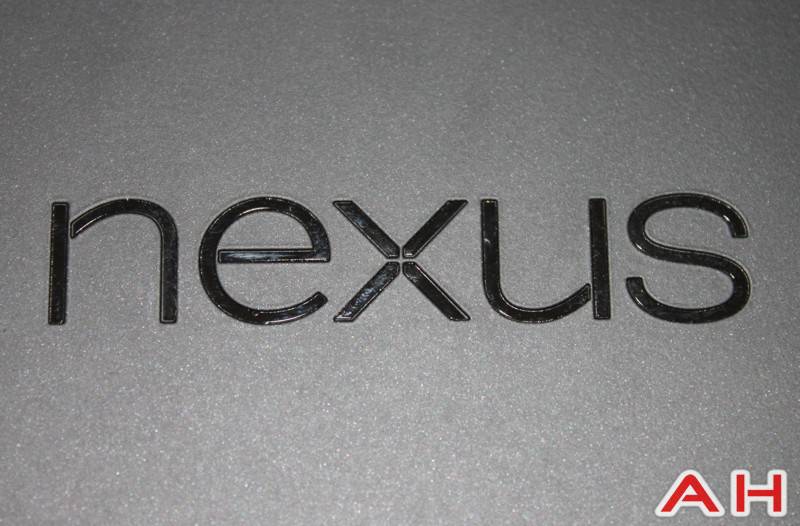 The new Nexus 7 is a fantastically well equipped tablet to handle all your needs and does all of this while still looking sleek and in a portable package that is so light you could forget you have it on you. The screen, sound and performance have all been knocked out of the park and with it being stock android it will get updates to newer software in a timely fashion and first, which is always a plus. Whatever you have to throw at it, Games, Movies, Music, Books, Social Networking, Ingress.. Nexus 7 can do it and do it with flare. It’s the best tablet in its size in my opinion, and for $270 and 32GB of storage, how could you say no.