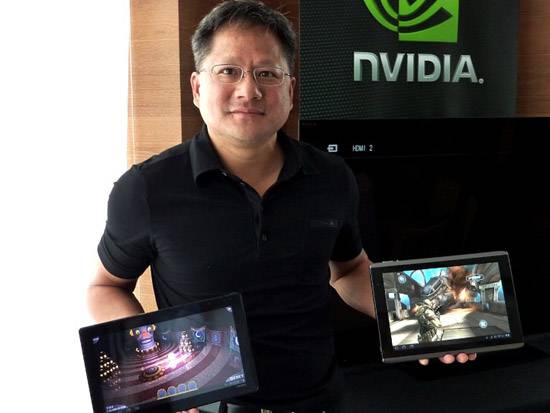 Fudzilla is reporting that Nvidia is planning to release its own high-end tablet early next year, just like it did with the SHIELD, and it will run the brand new Tegra 5 chip, that promises PC-like graphics with its also brand new mobile Kepler architecture, that will support the full OpenGL 4.4 specification, and promises to be 3x more efficient than iPad 4's GPU, at the same performance level. That, of course, also means it could be 3x more powerful, at the same power consumption level, which is most likely what Nvidia plans to do.

I think Nvidia's recent moves of making their own hardware are not bad moves, but it all depends on how much traction they can get for these devices. Worst case scenario, these devices could still be relatively small-budget marketing campaigns for their chips. Instead of waiting for OEM's to buy their chips, and demanding a certain chip size or price from them, which seems to be happening often to Nvidia lately, Nvidia gets to make the "tablet of their dreams", and make the Tegra 5 chips as powerful as they want it to be.

Hopefully, this will also mean that Nvidia will stop making small underpowered chips compared to the competition, especially in the GPU department. So far Nvidia has kept making 80mm2 chips, sometimes even at a process node that is one generation behind the competition, like in Tegra 3's case, while the competition was making them at the latest node, and at 120mm2 die size or so. That made it pretty easy for everyone to beat Nvidia's chips.

Tegra 4 was at the same 28nm process as most everyone, but it's still smaller than other chips, which means Nvidia has to raise the clock speed of the GPU cores to be competitive, which means higher power consumption, and that brings us to another problem arriving from this decision to make their chips smaller.

Nvidia's chips haven't been historically very power efficient because of this decision, and I think that in order to call a chip a "mobile chip" it needs to work in smartphones, too, even if you have to use lower clock speeds. If you can't even put that chip in a smartphone, then you're probably cheating with it in tablets, by using a huge battery, and promoting a certain battery life number that may not be real, because the chip isn't as efficient as it should be.

I think mobile Kepler looks very exciting, and I'm glad Nvidia wants to release it as early as Q1 2014 with their tablet, but I fear for its power consumption levels, because Nvidia will most likely use a 28nm process again, when everyone else will be moving 20nm next year, which means Nvidia will once again be a generation behind in process node technology. Their Cortex A15 CPU's could've really needed a 20nm shrink, even if mobile Kepler is so efficient that it can beat the competitors, while keeping a very low power consumption even at 28nm.

If that fails, we can still hope Tegra 6 will finally put Nvidia on the right path. It should come with a brand new custom "Denver" CPU core, and also a brand new "Maxwell" GPU architecture, and should also be made at 16nm FinFET. If they keep the die size at 100-120 mm2, just like everyone else, I have a hard time seeing how anyone will beat them. But there's still plenty of ways Nvidia can ruin this until then, and we'll have to wait for that until at least mid-2015.