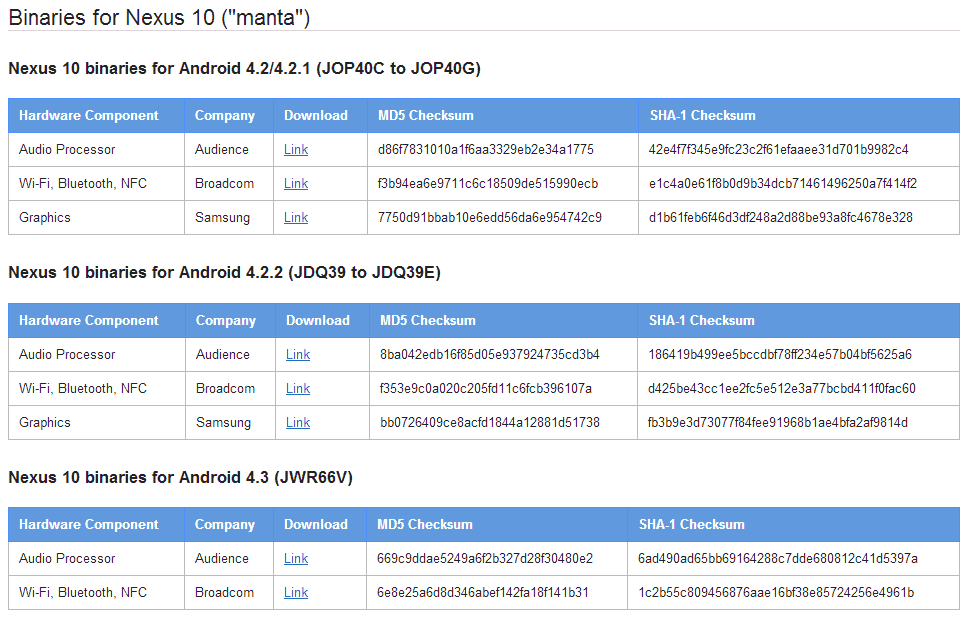 We've just gotten over the problems with the new Nexus 7 and factory images. Now we're seeing that there is a binary missing for the Nexus 10 with Android 4.3. As you can see in the screenshot above, for Android 4.2.2 there is the Audio Processor, Wifi Bluetooth NFC driver, and Graphics driver present. Then if you glance down to the Android 4.3 binaries there's no Graphics driver. Guess who's fault that is? Samsung. As you can see under the 4.2.2 binaries, Samsung is responsible for the Graphics drivers for the Nexus 10.

Now back before JBQ decided to quit AOSP, he stated over on a Google Groups thread that the graphics driver is indeed missing. He points out that if you're looking to build Android for the Nexus 10 from source, you are pretty much out of luck when it comes to Android 4.3. At least for now.

Nexus 10 is not supported in AOSP as of 4.3. You need to use 4.2.2… Getting a license would be a prerequisite, but it might not be the only factor. Specifically, if such a license doesn't apply to all the necessary files, or if it only applies to 4.3 but not subsequent releases, it's not clear that Nexus 10 would be considered supported again.

This time it's not Qualcomm's fault, since the Nexus 10's GPU is a Mali T604 which is paired with Samsung's Exynos 5 Chipset. Samsung has licensed the design of this GPU from ARM, so they can release the binary if they so choose. But it looks they choose not too, unfortunately for us. Hopefully we'll see Samsung and Google work this out for the Nexus 10.

As it stands right now, the factory images for Android 4.3 for the Nexus 10 do exist. So if you're looking to go back to Stock or just start all over again, you can do so. This situation really only affects developers looking to develop Android 4.3 for the Nexus 10. I'm sure it'll be resolved shortly, but with JBQ no longer with AOSP, it may take longer than usual. So we'll have to just sit here and wait.

How many of you are surprised to see Samsung holding out on the Nexus 10 graphic driver?