Skip to content
Trusted By Millions
Independent, Expert Android News You Can Trust, Since 2010
Publishing More Android Than Anyone Else
49
Today
49
This Week
804
This Month
3804
This Year
121414
All Time Apple and Samsung might be about to get some competition from ASUS in the high-resolution tablet market with an unknown device that has just showed up in GFXBench under the codename Taurus.We’re seeing more Retina-class displays in the market and it’s just a matter of time before ASUS releases one of its own. We already know that ASUS can put together a high-res display as it did on the new Nexus 7 with a 1920 x 1800 resolution on a 7 inch display giving a whopping 323 ppi but now we’re talking 10 inch tablets and ASUS hasn’t gone over 1080p yet.

The Taurus has a 2560 x 1600 display which is marked as just 1504 after you subtract the on-screen navigation bar. This resolution on a 10 inch device gives a 299ppi which is higher than the fourth generation iPad who sits at 264ppi and it’s on pair with the current Nexus 10 made by Samsung at the same resolution.

The device is also carrying an NVIDIA Tegra 4 processor clocked at 1.9GHz inside giving the tablet plenty of punch to run pretty much everything you can throw at it. NVIDIA has not had much success with the Tegra platform so far and it’s losing ground against Qualcomm so it’s nice to see a brand like ASUS trust NVIDIA and keep the competition alive. 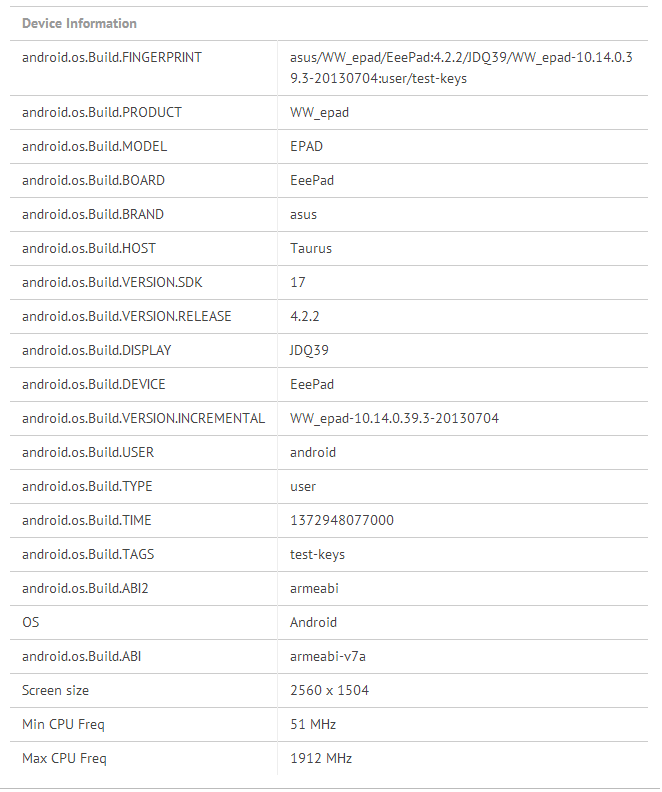 We’ve heard rumors that ASUS might be the one to make the new Nexus 10 model and with these specs, they might have a base to displace Samsung out of the Nexus program for the year. So far Samsung had 3 Nexus devices in the last two years and if it’s actually ASUS to do the refresh, it would be the first time a brand to manufacture two different Nexus devices in the same year with the Nexus 7 and the Nexus 10.

We know that the Taurus won’t be the Nexus 10 since it’s running Android 4.2.2 and not 4.3 and there’s no way a Nexus is going to be launched with an older version of Android but it might be the base for the Nexus 10 sometime later this year with the rumors pointing to November.

The current Nexus 10 has some issues with AOSP because of the graphic drivers and Samsung might be the problem since the Nexus 10 packs an Exynos processor and they have the license to those graphics drivers. If that’s the case, it makes sense for Google to look for a manufacture somewhere else and avoid this kind of issues in the future.

ASUS made a great job with the new Nexus 7 and the Transformer devices are pretty cool so we know ASUS can make good tablets. I guess we’ll just have to wait and see what the future brings us, hopefully it won’t take too long.