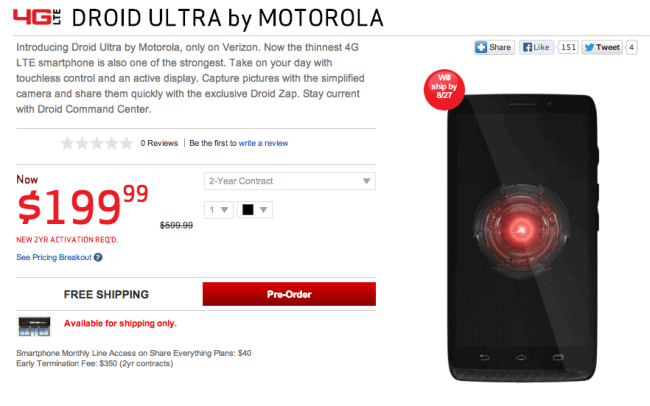 The DROID Ultra and Maxx are basically the same device, except the Maxx has a much larger battery and twice the amount of storage. 16GB versus 32GB in the Maxx. We aren't really sure why the device has been pushed back a week, but we could speculate that the pre-order demand was higher than they initially expected. Especially with the Moto X being pretty disappointing. If you're on Verizon, at least you have other options like the DROID Maxx, Ultra and Mini, which have the same features as the Moto X plus more.

As we stated already, we don't really know why the shipping date has changed and if that affects the in-store availability of both devices. But we'll continue looking for more information and hopefully we can find out what's going on with the release date. With the 20th being next week, we were kind of hoping we'd see the DROID Maxx and Ultra very soon. Looks like we'll be waiting a bit longer now. It would be strange to see the DROID Mini and Moto X get released before the DROID Maxx and Ultra since Verizon is going to put all their marketing power behind the DROID line. Since that's more special to them then the Moto X.

The DROID Mini starts at $99, DROID Ultra at $199 and the DROID Maxx at $299 all with a new 2-year contract only on Verizon. From what we've been told, there won't be GSM versions of these like we've seen in the past with the DROID 1-4 which were the Milestone elsewhere. How many of you have pre-ordered the DROID Ultra or DROID Maxx? Let us know in the comments below.