If you’ve been wanting to get a Moto X or one of the new Droids, now’s your chance to get a better price on them since they’ve just been added to Motorola’s trade up program, giving you the chance to save $100 on your phone of choice.

Obviously, you first have to qualify to receive the rebate but luckily it’s not too hard. You just have to own an old Motorola phone which unless it’s from the last year or so, it’s probably worth less than $100 if you try to sell it on your own. The list of devices that Motorola accepts is rather limited with just a dozen phones in there and it’s kinda strange to find that the Motorola XPRT goes for the same $100 than the Droid 3 or the Photon 4G which are much better phones.

If you have one of these phones, which you can check at mototradeup.com, all you have to do is mail the device with proof of purchase to Motorola and they’ll send you a Motorola Visa Prepaid Card (or a Verizon Wireless Gift Card if you choose a device in the red carrier) within 6 to 8 weeks. 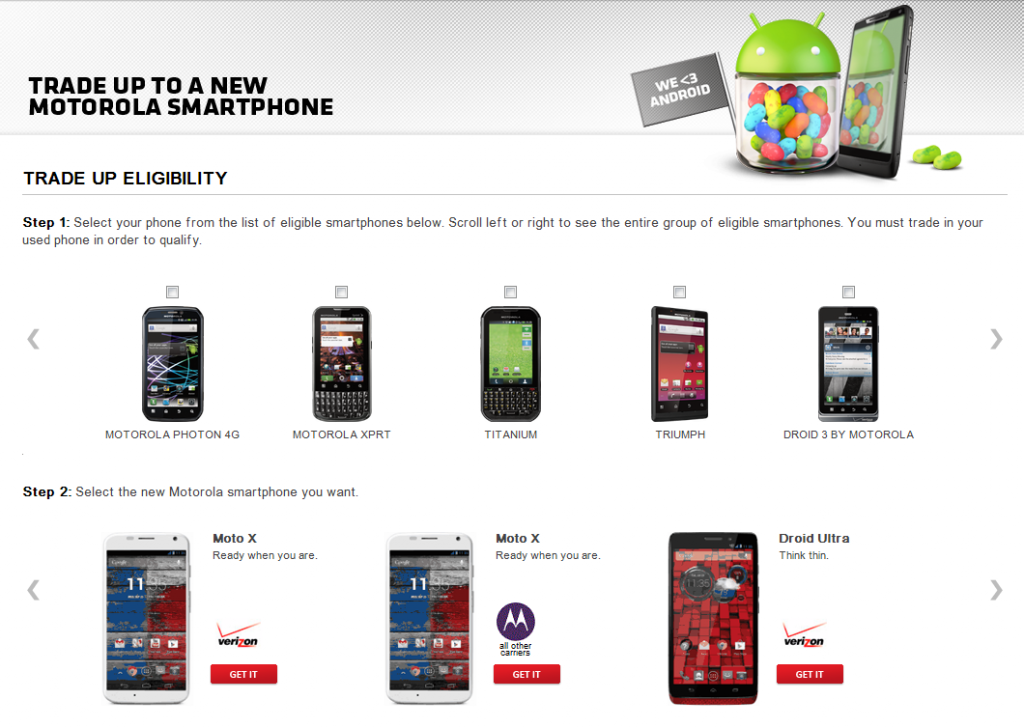 The trade up program is not limited to the Moto X and the Droids, which are the Mini, the Maxx and the Ultra, but you’ll also find devices like the Photon Q, the RAZR M or the RAZR MAXX HD among others, although I see no reason for anyone to pick any of those phones over the newer ones.

Compare to the others, the Moto X and the Droids are in a completely different league, no only they are the latest devices, but they have some incredible features like Active Notifications, Touchless Control, Quick Camera gestures and Motorola Assist. The hardware is better as well, this devices carry the new Motorola X8 chip which has some low-power processors that greatly improve battery life, with the Moto X being said to stand for 24 hours with a single charge.

If you are coming from a Motorola phone and need to upgrade, this seems like a great choice, just don’t forget to make sure your device is eligible for the trade up program before making the purchase.