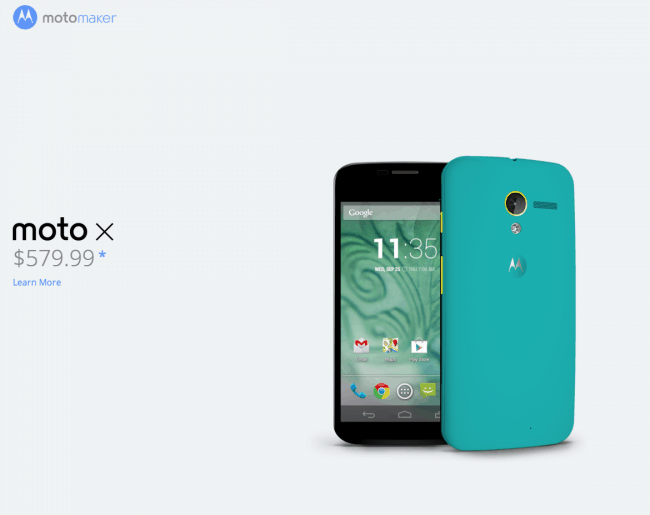 MotoMaker is still an AT&T exclusive, unfortunately. But up until today, you could only get a customized Moto X if you purchased it on a new 2-year contract. That has now changed. It's still only for AT&T, and if you want to use it on T-Mobile you'll need to unlock the device, but it should work on T-Mobile's bands as long as your in a market that has the refarmed HSPA+ 42mbps band. But no LTE, at least I'm pretty sure that's how that goes.

The Moto X will cost you $199/249 on a new contract, for the 16GB and 32GB versions respectively. Off contract, that jumps up to $579 for the 16GB and $629 for the 32GB version. Remember that the Moto X launches on Verizon on Thursday, but that's in the black or white version only. AT&T has an exclusive on Moto Maker, for who knows how long. Although we have heard rumors of it only being until November 1st. However, there's no confirmation on that just yet.

Additionally, Motorola was looking to get your new customized Moto X to your doorstep with 4 days. Right now, the website is saying the estimated delivery time is 8 days. Considering that they aren't just picking a Moto X and shipping it to you, that's still pretty good. Especially if you remember the whole Nexus 4 shipping thing last year, I think that got all the way up to about 12 weeks. Anyways, 8 days, not too bad. I'm sure you'll get it sooner than that. As most places like to over estimate so when your product, in this case Moto X, arrives early you're happy. There's also no engraving, at least not yet. Motorola has had to put that on the back burner for the time being. The shipping time will likely drop in the next few days over even the next week or so. As Motorola gets caught up with their orders. But if they are behind, that's gotta be good news for the company, as they're actually selling devices.

Looking for a Moto X off-contract? Sure you are, head over to Moto Maker and design yours today!