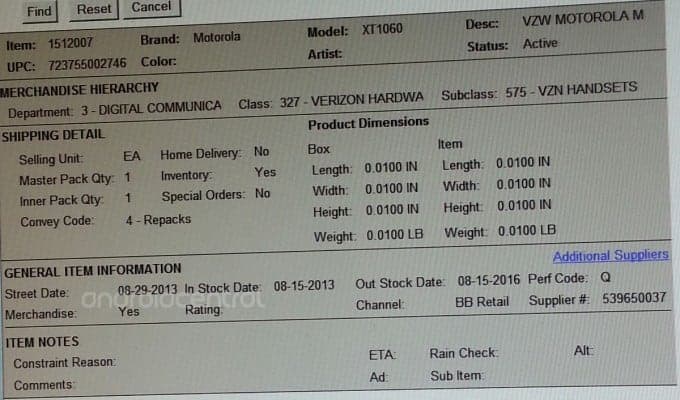 We know the Moto X is launching between late August and early September. We initially heard that the Verizon variant would go on sale on August 23rd. Now according to this leaked BestBuy screenshot that Android Central has obtained, it appears that they will be selling the Verizon version starting on August 29th, and stock will be on hand starting August 15th, which is this Thursday.

Now before we get to far into this, nothing is official yet folks. So until we heard official word from Verizon and/or Motorola, treat this as a leak as that's essentially what this is. If this is the official release date for the Moto X, that puts it's just a few days behind the pushed back release of the DROID Ultra and DROID Maxx, which we reported earlier. One thing is for sure, the Moto X will probably go on sale before the HTC One.

The Moto X features rather mid-range specs, like a 4.7-inch 720p AMOLED display, a dual-core Snapdragon S4 Pro clocked at 1.7GHz using Motorola's X8 Mobile Computing Platform, 2GB of RAM, 16GB/32GB of storage, Android 4.2.2 and a 2200mAh battery. It's also customizable, but at launch that is exclusive to AT&T for some odd reason. But we have heard that it'll open up to other carriers a few months later. So it seems like AT&T scored a limited time exclusive with the Moto X. The Moto X is coming to AT&T, Sprint and Verizon for $199/$249 on-contract, depending on the amount of storage you're looking for. It'll be available for T-Mobile, but sold through Motorola's channels, at least initially.

So if you're on big red, it looks like we've got a few more weeks before you'll be able to buy the Moto X. Right now all the manufacturers are announcing their fall devices and getting ready for back-to-school and the holiday season. So we should see quite a few new releases coming to all the major carriers within the next month. With the Moto X and the DROID line being the start of it all. How many of our readers on Big Red are planning on grabbing the Moto X?