Motorola’s Moto X has received tons of hype over the last few months, and we’re starting to see just why.  While the Moto X doesn’t appear to be the game changer that many thought it might be, it’s definitely a respectable phone with a curious new type of processing design.  Motorola first unveiled its new DROID lineup on Verizon just last week, and along with it a brand-new processing architecture called the “Motorola X8 Mobile Computing System.”  While this can be seen as marketing speak to spin all the octo-core talk lately in favor of Motorola, it’s really just attempting to change our perspective on what an 8-core chip really means.  Motorola’s idea attempts to take a respectable dual-core processor, the Snapdragon S4 Pro, and meld it with a quad-core Adreno 320 graphics processor, along with 2 other cores to specialize the performance of their device rather than choosing a generic multi-purpose solution that the other guys are using.  The result is definitely positive for Motorola in quite a few ways, and disappointing in others.  We’ll get the disappointing numbers out of the way first and save the good news for last.  It’s worth noting that in these benchmarks the Moto X and Galaxy S4 are running Android 4.2.2, while the Nexus 4 is running Android 4.3, and the Galaxy S III is on Android 4.1.1. 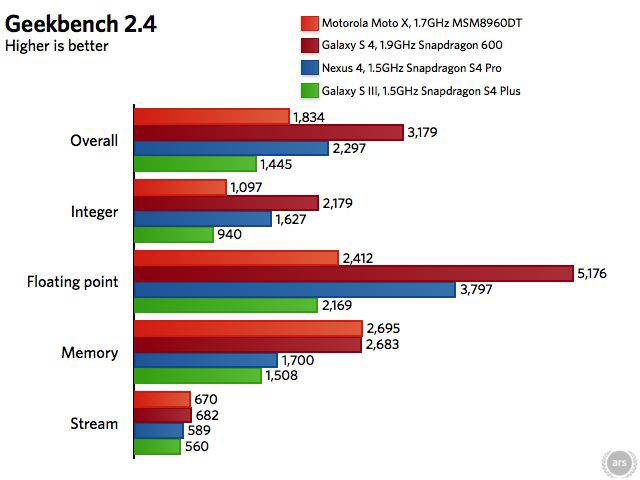 As you can see Motorola’s decision to only use 2 cores for app processing is showing in overall performance of the system.  Using GeekBench 2.4 we find that the Moto X only wins in the memory portion of the benchmark suite, showing that Motorola didn’t skimp when it comes to the type of memory it put in the Moto X.  Computational performance (found in the Integer and Floating Point tests) is significantly lower than the Galaxy S4 or the Nexus 4.  This is again because Motorola went for a dual-core solution when it comes to general processing, while the Nexus 4 and Galaxy S4 enjoy faster quad-core processors for this purpose. 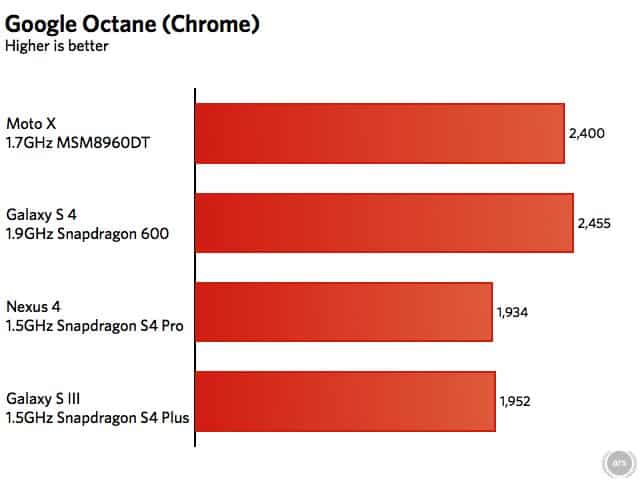 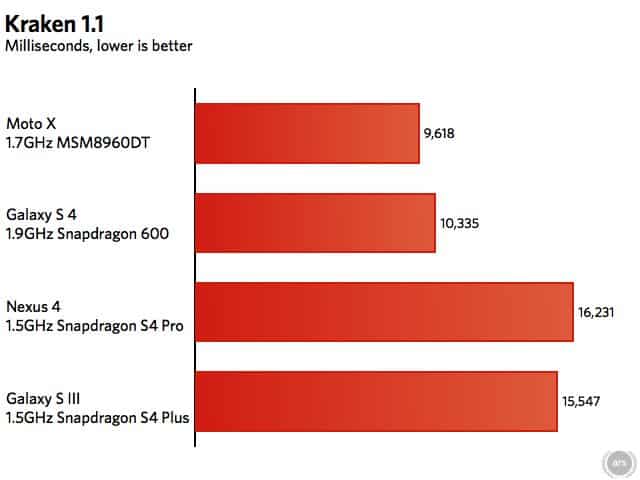 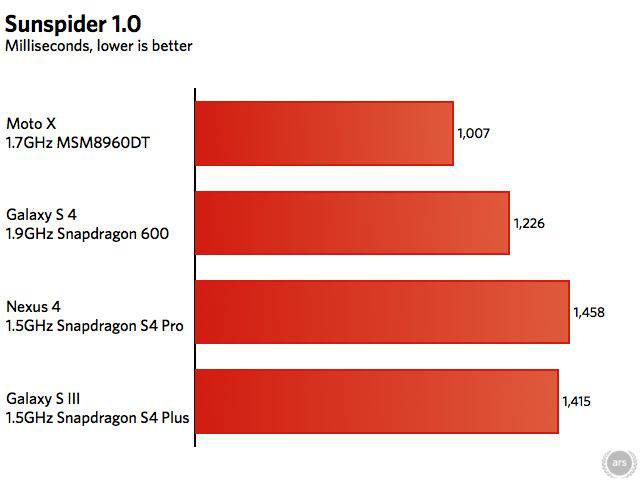 Things begin to change though when we look at more specialized tests.  Browsing, for instance, is on par with or faster than even the beastly Galaxy S4, meaning your pages load quicker and actions are performed faster on the Moto X in this case.  Things get even more interesting when we move on to gaming though, where the Moto X really starts to shine. 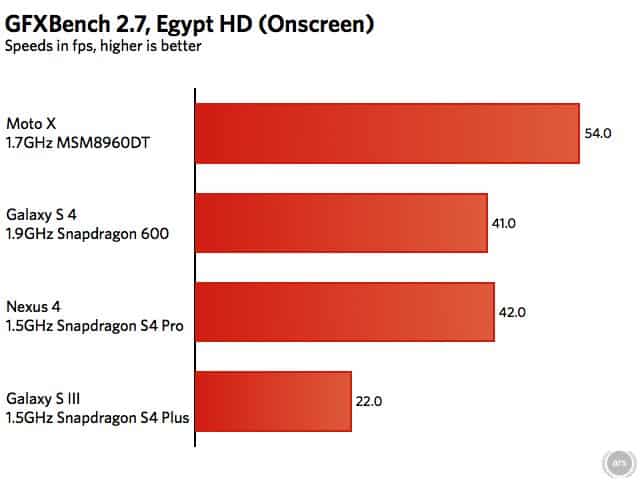 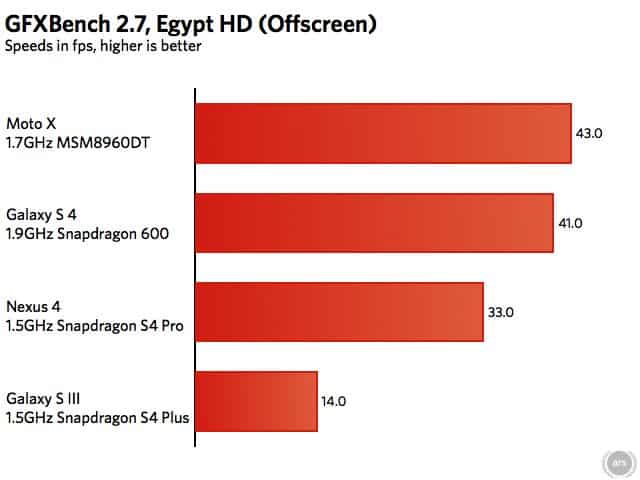 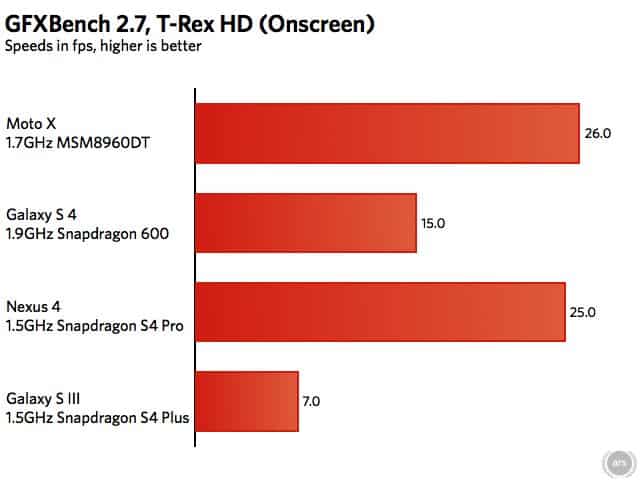 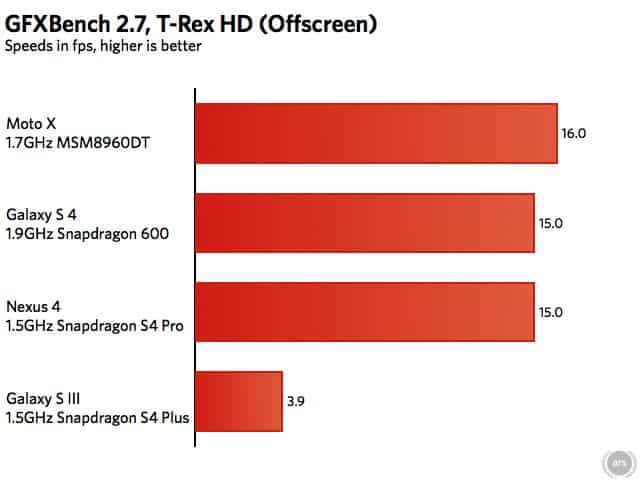 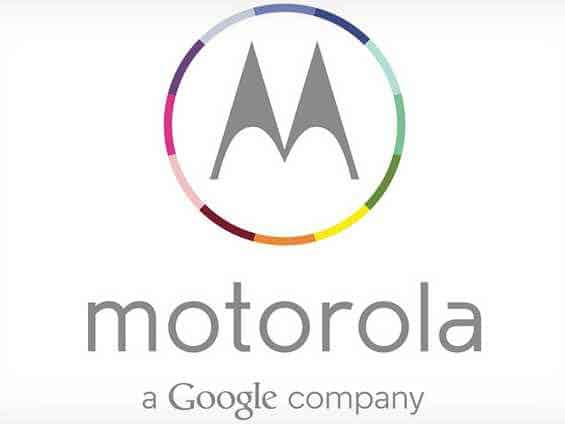 What does Motorola’s new architecture mean for the tech world?  We’re going to have to see when it comes to real-world performance over a more significant amount of time, but first impressions are really solid.  Motorola has surprised everyone here, initially making us think this was just going to be a simple mid-range dual-core phone, and pulling out a whole new specialized processing architecture to take advantage of the strengths of the mobile platform.  While the general processing performance of the Moto X leaves a lot to be desired, the gaming and web browsing performance are above anything else out there in the world of phones, and really show how specializing in processing architecture can make the most out of a seemingly tepid spec sheet.  Motorola might really be onto something here with this design, proving that you don’t need 8 general purpose cores to get the job done, just a few specialized ones that make the experience better all while attempting to save battery life.