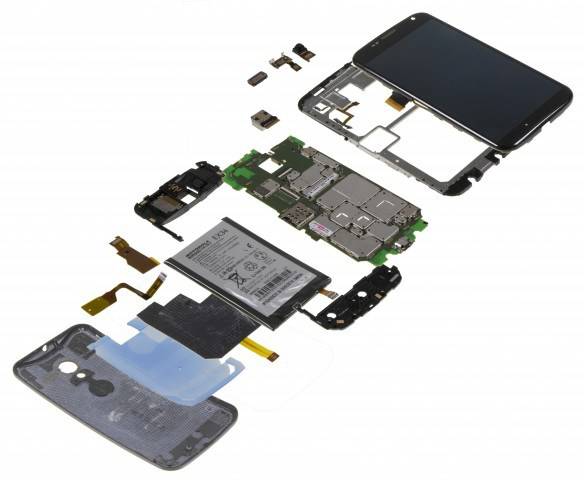 We've talked a lot about the Moto X recently. In fact, it seems like we've talked more about the Moto X than anything from Samsung. Which is quite surprising. One of the bigger complaints on the Moto X is the price comparative to the specs. After all, it's mostly just a Nexus 4 with a dual-core Snapdragon S4 Pro. The Moto X has been torn down already and we found out that it was pretty easy to repair. Which is great, especially compared to the HTC One that is nearly impossible, unless you take it to HTC to get it fixed.

In today's tear down, we find out that the Moto X costs about $221 to make. That's a little more than the Galaxy S4. Which makes it a bit puzzling to me, since the Galaxy S4 has higher specs and costs less to make, shouldn't people complain about the nearly $450-500 mark up for the device.

The new report from IHS, shows that the Moto X is $16 more expensive than the Galaxy S4. What's strange is that the Motorola X8 SoC costs about $32 to make, which is abour $4-5 extra for the two companion cores from Texas Instruments, while the S4 normally costs $28. While the display on the Moto X cost just $62.50 compared to the $75 1080p AMOLED display. So in addition to the 720p AMOLED display being more battery friendly, another reason for Motorola choosing a 720p display is the cost. Since their processor cost more than Samsung's Exynos 5 Octa processor.

Additionally, it's said that it costs Motorola about $12 to assemble each device. Which we kinda expected since it's being made here in the US and not Asia. In Asia most devices cost about $7-8 to assemble. I'm sure the customized Moto X's cost a bit more to assemble than the $12 as well. But there's no proof on that.