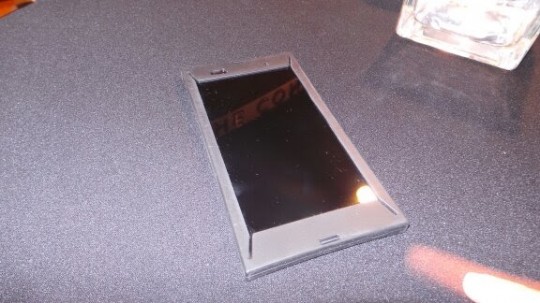 Sony's Honami has been an elusive beast, only posing for a few shots here and there along its journey as a prototype device. So far we've seen leaked specs, benchmarks, and even the camera and overall UI of the phone, but have we really seen all that much of the phone to date?  The Xperia Blog has posted some pictures of prototype phones that Sony has attempted to mask in the process of publicly testing them.  Instead of just giving out a final looking device, many manufacturers now encase their phones either in a protective non-removable cover, or an entirely different housing altogether.  We've seen Samsung do this in the past with nearly all of its flagship Galaxy phones, including the Note 3 most recently.  This leads us to today's picture, which appears to be the Sony Xperia i1 Honami, which is Sony's latest flagship device featuring a 20 megapixel camera with a Sony G Lens.

As you can see from the picture the encased phone is obviously not sitting in the final housing for the device, and is instead in a prototype housing as to not give away the look and design of the phone.  Adam Outler is an Android developer who's been posting from XDA:DevCon this week and had posted a shot with this device on his Google+ page.  While it's since been removed (likely at the request of Sony), the prototype phone was tagged "Unannounced Sony Device."  Since we've yet to get an official announcement of the Sony Xperia i1 Honami, we're pretty sure this unit pictured was the Honami.  We should be seeing the Honami announced at IFA in Berlin on September 4th. 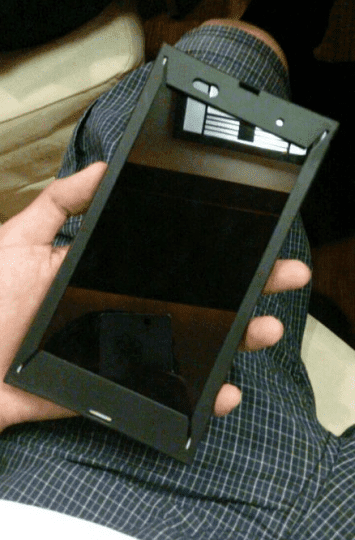 We've seen this type of casing before from Sony too.  Above is the Xperia ZU, which is Sony's 6.4-inch phablet device that's coming out September 12th.  While the Xperia ZU's case in this picture is black, it's obvious that it's using the same type of casing as the leaked Honami photo above.  It's always interesting to see what manufacturers do to prevent leaks, but to keep the hype going.  We all love a good rumor, and it's even better when accompanied with a leaked photo.  Prototype devices can give us a general idea of size and functionality, but we all know the final device will look considerably better.  We expect the Xperia i1 Honami to have similar stylings to the Xperia Z and Xperia ZU; after all they are in the same family, right?