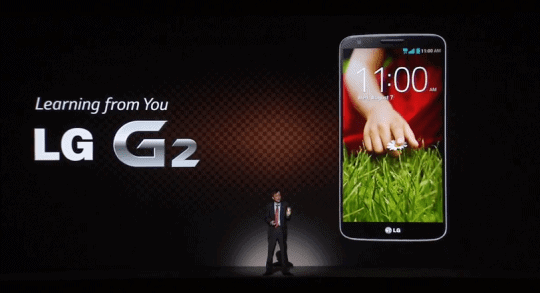 Today, LG announced their newest flagship device, the G2. This is their successor to the Optimus G, and yes they've dropped the "Optimus" name from their flagship line of devices. The G2 has a 5.2-inch display which is full HD and an IPS display. So it's going to look pretty darn nice. The G2's display is virtually edge-to-edge. The G2 is also sporting a Snapdragon 800 processor which is clocked at 2.26GHz. That's a pretty fast processor.

LG has also confirmed that all four major carriers will be getting the LG G2. So that means AT&T, Sprint, Verizon and T-Mobile are getting the brand new G2. Of course no availability has been given, but we've heard in the past that the G2 will launch on all four carriers by the end of August and into early September. That's pretty good for LG. And much better than the availability of the Optimus G and Optimus G Pro last year and earlier this year, respectively.

There's also no word on pricing, but we are figuring it'll be around $199 and $299 on a 2-year contract, with it being almost $600 outright. Which is normal for flagship devices. The G2 is set to run with the Galaxy S4, Galaxy Note 3, and the Moto X. I'd have to say, at this point unless the Galaxy Note 3 is very exciting, the G2 may steal the sales from Samsung. Which is something I'd like, not because I don't like Samsung but because I like seeing competition and not just one manufacturer taking command of Android.