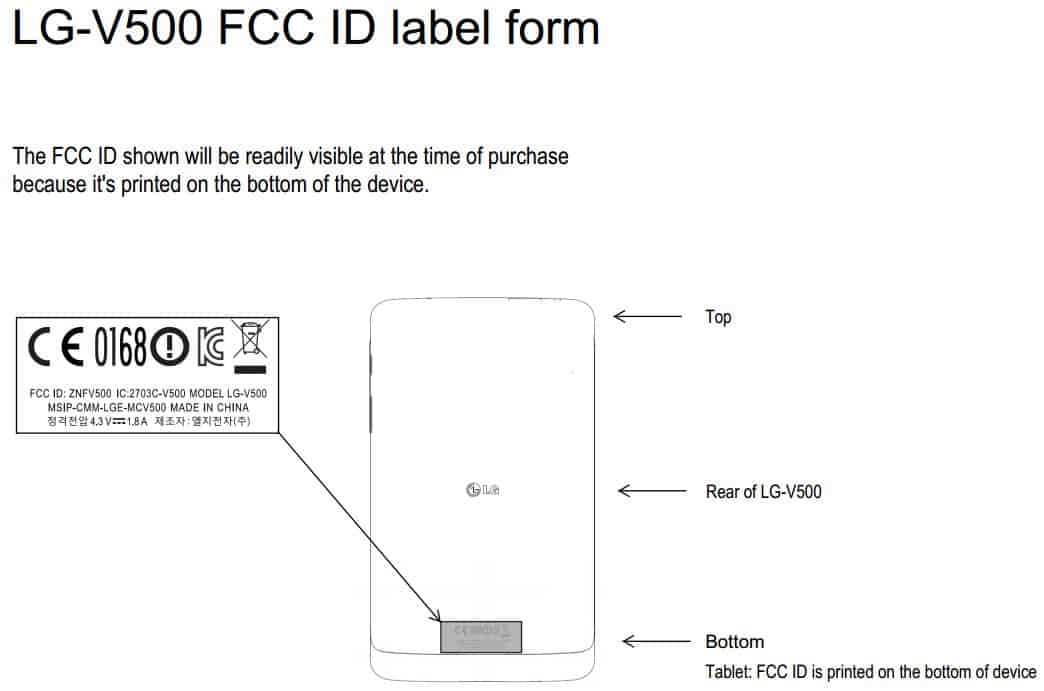 At this point in time LG's GPad isn't exactly a well-kept secret.  We first heard about the GPad back in July when LG trademarked the name, earlier this month from the Bluetooth SIG, and then just the other day we found a little more about the specs of the device.  Today we're looking at an FCC filing found by Android Authority that pretty much guarantees that the GPad is the real deal, and will be coming to retail sometime soon.  LG has filed a 180-day confidentiality request with the FCC, meaning that we're not going to get the full range of specs from this filing, just the ones that have to do with wireless transmission.  The LG-V500 model number is specific to what is known as the GPad, and we also find a few more interesting tidbits in the filing:

Back when we saw the GPad make its way through Bluetooth certification it was listed as a Bluetooth 4.0 device, whereas the FCC filing here doesn't seem to specify the version number.  We're also not seeing the certification for LG's other tablet model, the LG-v507L, which is presumably the LTE version of the tablet.  Since this particular filing for the LG-V500 specifically says it doesn't include mobile network specifications, that means this is the WiFi-only version of the tablet.  Thankfully though the GPad supports WiFi AC and N, which are currently the fastest available WiFi speeds.  WiFi is a little weird with the naming conventions, as there's no alphabetical progression of speed, rather a seemingly random letter assigned to speeds as things get quicker.

We're getting some more rumors about what powers the GPad as well.  While we didn't have an exact quad-core processor last time around the rumor mill, it looks like LG is going to be packing the Qualcomm Snapdragon 800 quad-core processor inside the GPad.  This is the same processor that powers the incredibly fast LG G2, and it's likely to keep you very happy if you end up getting a GPad.  As for the rest we're looking at 2GB RAM inside the GPad, and an 8.3-inch 1900 x 1200 display (272 pixels-per-inch). That's a fantastic tablet anyway you slice it.  If you like reading through boring FCC documents, you can check out the original filing at the FCC's website.