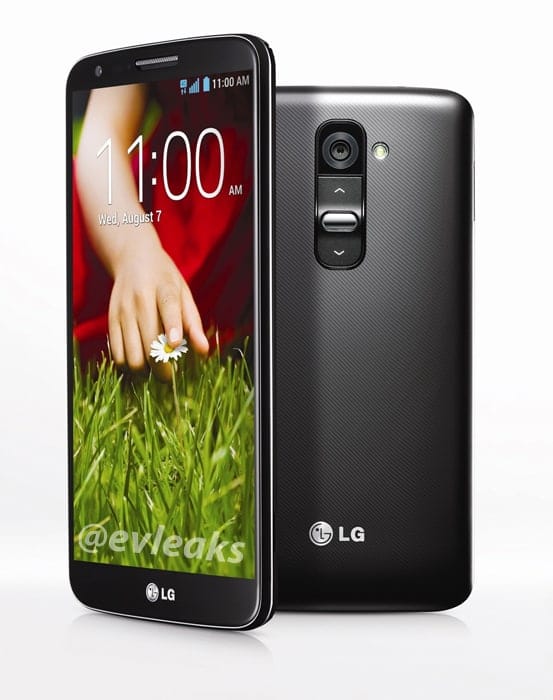 LG is set to announce their latest flagship, the successor to the Optimus G, tomorrow morning in NYC. But this evening, @evleaks being the sneaky little leaker he is, has found the press images for the new G2 set to be unveiled tomorrow.

As you can see in the image above, it pretty much confirms the volume rocker on the back, and the full HD display without any physical buttons. In fact, we've seen in other leaks that the on-screen navigation buttons are transparent, which I'm a huge fan of. The LG G2 is also said to sport a Snapdragon 800 processor, along with a 5.2-inch 1080p display. We've also heard rumors of 2GB or 3GB of RAM on board. I'm hoping for 3GB of RAM, but 2GB should be more than enough. It's also supposed to have a pretty nice camera. Along with the screen being almost edge-to-edge. 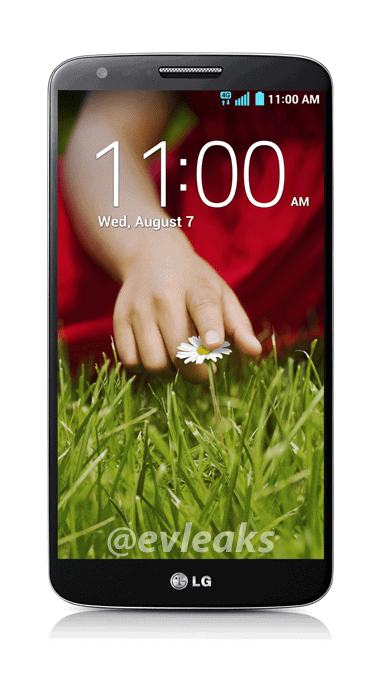 You'll notice on the full front image, which is shown above, that the phone shows 11:00AM and Wednesday, August 7th. That's the date and time that LG is set to unveil their latest beast, the G2. Of course, as always we'll be bringing you the latest on the G2 and covering it til we can't remember what other devices came out in 2013. We've seen a lot leak out for the G2 already, but I'm pretty sure LG still has more up their sleeves. The G2 is supposedly coming to all four major US carriers in September, after launching in Korea on August 8th. We'll have all the details tomorrow morning though.

The G2 is replacing the Optimus G which was announced last year. The G2 could also be what Google uses to make the Nexus 5. But I'm not a firm believer on that since the Nexus 4 was the only Nexus that was made from another flagship. But we'll have to wait a bit longer to see if that's truly the Nexus 5 or not. Meanwhile all our eyes are on LG and the G2 for tomorrow.

How do you guys like the look of the LG G2? Let us know in the comments down below.