We all know that Oppo is gearing up to launch their latest and greatest smartphone, the Oppo N1 but, what we don't know much about is the camera side of things. The Chinese company has been teasing us for some time now concerning details of the device and now, the first leaked images of what could be the device in the flesh have surfaced. There's very little that we can gleam from these leaked photos, as Android Community is reporting, there's no look at the back of the camera, so we can't see what the camera looks like in the flesh. Nor can we take a look at the rear touchpad that Oppo was teasing last week.

While it would be nice to get a look at the back of the device, it's early days yet and we're sure that something pops up on that front soon enough. If anything, these photos could well be a controlled leak, orchestrated by Oppo themselves . Nevertheless, the N1 is going to be an interesting product launch. As manufacturers like HTC and Nokia are moving away from the specs race and focusing on camera prowess, it's going to be interesting to see just what Oppo can bring to the table. 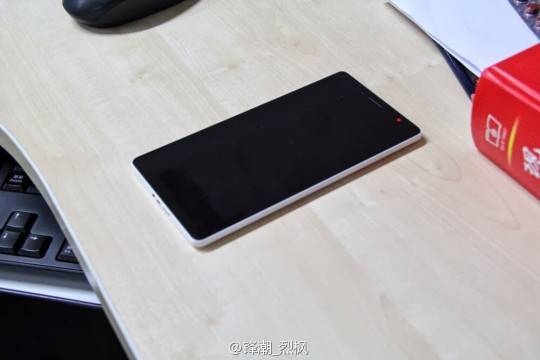 Speaking of specs, the N1 is going to be just as powerful as most other flagships out there with a 2.3 Ghz Snapdragon 800, 2GB of RAM and a 5-inch 1080p display. The camera however, is the more interesting side of things and rumor has it the Oppo N1 is going to be shipping with a 12 – 16 Megapixel sensor paired with a Xenon flash. By now, we all know that megapixels don't mean much when it comes to tiny sensors so, Oppo is said to be using their "Owl" technology to clean up low-light shots and better perform when the sun has set.

The N1 is certainly going to be an interesting release, as the company proved with the Find 5 that they're more than capable of delivering a quality product.