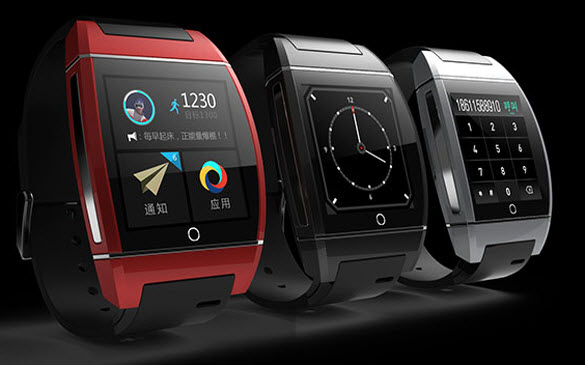 Just yesterday, we reported on a concept smartwatch from Samsung, called the "Samsung Gear," along with saying that that a wearable wrist device will be the next hot item. Pebble launched their version of a smartwatch last month and sold out within hours of the launch. All of the major tech companies, LG, Microsoft, and even Apple, have announced they are working on their own modern wrist device.

Today we see that a China based company, Shenzhen inWatch Tech Ltd, is releasing its new inWatch One series of smartwatches, available on their website for RMB 1,788 (about US$295). They will also offer a cheaper, Bluetooth only version, inWatch BT, seen below:

They claim the device uses Voice Input Functions, built-in Bluetooth to link headsets and other digital accessories, a customized version of Android 4.0, Navigating and Positioning system (GPS), Wi-Fi, and a Heath Module to track your health via a built-in sensor. It supports a variety of popular applications, including WeChat, Sina microblogging , QQ, and Baidu music.

According to Engadget China it comes with 1.54-inch capacitive touch display with a 240 x 240 resolution, a dual-core 1.2GHz processor with 1GB RAM and 8GB of internal storage, and also sports a built-in 2MP camera. It uses a 500mAh battery and comes with a charger, as well as support for USB and Wireless Charging…they claim 36 – 48 hours of usage time with 120 hours of standby. It will support GSM networks and yes, you can insert SIM cards.

With easy to use program menus, you can quickly find and use your favorite applications, such as Music, Photo Albums, SMS Texting, Clock and Alarms, Contacts, and Telephone connections.

The six available colors include red, blue, white, black, silver, and gold. Reservations are being accepted by the end of August.