Intel has posted information about two Android tablets for the education market at their Education Solutions website. Both tablets are named Intel Education tablet, have an Atom chip inside and 1Gb of RAM but that’s about the only thing they have in common. For starters, one’s a 7 inch tablet and the other is 10 inch, so let’s take a look at both of them.

First is the 7 inch tablet, which is powered by a single-core Atom Z2420 chip clocked at 1.2GHz, 1024 x 600 resolution, 8GB of storage and running Android 4.1. That processor is used by manufacturers like Asus for sub-$200 devices, so I wouldn’t expect to get much power out of it and Intel claims the tablet can last for 7.8 hours of battery life which seems plausible given the processor and resolution of the device. It weighs 12.5 ounces, just a tad more than the new Nexus 7 at 12 ounces.

The other tablet, the 10 inch one, has a 1280 x 800 resolution and is powered by a dual-core Atom Z2460 clocked at 1.6GHz which you might remember as codename Medfield, the one used in the first Intel-based smartphones like the Lenovo K800. Aside from that, you get 16GB of storage and a stylus, all packed in a 1.5 pound package, which by reference is heavier than a Nexus 10 at 1.32 pounds. The battery should give you 6.5 hours according to Intel. This one is running Android 4.0 instead of 4.1 like the 7 inch model. 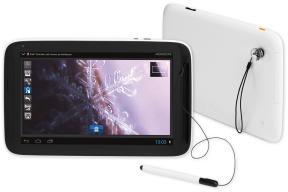 Aside from these specs, both tablets have Wi-Fi, a microUSB port, a 2 megapixel rear camera, a 0.3 megapixel front facing camera and McAfee security software, which I can’t imagine doing it any good to a processor of that caliber in terms of overall fluidity of the tablet. the 10 inch model has Bluetooth but on the 7 inch is an optional feature, I can’t imagine why.

There’s been no word on pricing or availability, but Intel will most likely let schools and districts know about them in due time.

Intel is providing these tablets as reference designs for manufacturers, just like it does with other devices like the Ultrabooks and they come with Kno Textbooks software, which Intel acquired in 2011 that allows the tablet to turn into a virtual laboratory, a library or a canvas to paint on, thanks to hardware features like the stylus on the 10 inch model, which also has a “snap-on magnification lens, which supports inquiry-based learning with close-up views, and a plug-in thermal probe that expands the type of experimentation and exploration possible.”

I know that Intel isn’t building these devices for regular consumers, but they seem to be too low-end even for a reference model. On the other hand, they might be really cheap devices to get them into schools and in children’s hands.