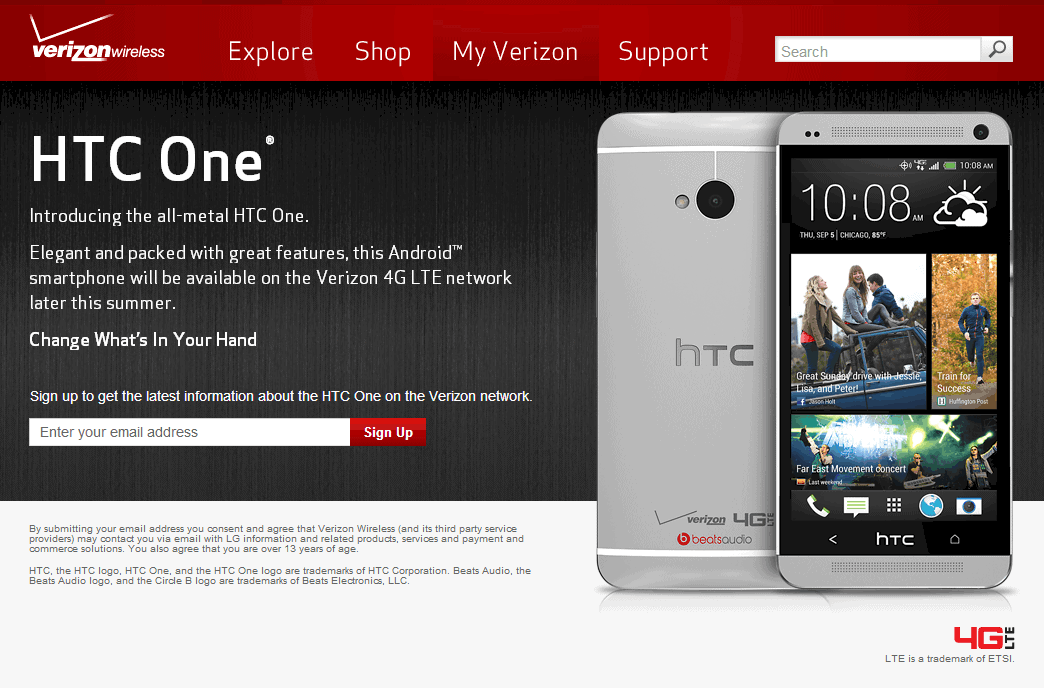 We've known for a few months now that Verizon Wireless will have the HTC One. Even though they are taking their sweet time releasing it. The device was announced back in February, before Mobile World Congress, and has been available on AT&T, Sprint and T-Mobile since early April. Now, about 4 months later, Verizon still hasn't released the HTC One. Why not? Well as many of us have speculated, Verizon doesn't really care about the HTC One. Verizon cares more about the DROID line since that's their exclusive line of devices.

Well we have a bit of good news today. Verizon now has a sign-up page available for the HTC One. Still no information about a release date, and these sign up pages are normally a waste of time since you'll find out the phone is available from us before Verizon emails you. But we are one small step closer to a release date. The HTC One will have all the features of every other HTC One variant. That includes Blinkfeed, Boomsound, the UltraPixel camera, and more. All on Verizon's 4G LTE network. Last we heard, the HTC One was going to be available on August 29th. But as we've kind of figured before, the date on the HTC One is September 5th, so we are pretty much expecting the HTC One on Verizon to be released then. They've already delayed it a few times, so I'm sure they'll do it again.

Now the logos. Verizon showed off the G2 last week or maybe they showed off a new logo with the G2 attached? Anyways, that one has 3 Verizon logos on there aside from the LG logo. Still not as bad as Verizon branding the home button on the Galaxy Note 2 last year. It'll also be the only US variant of the One to have a carrier logo on the back. So there's that.