At this point, it’s not a case of “if” when talking about the One Max but, more of a case of “when”. We’ve seen “non-final” press renders and heard a lot about the One Max already. Now, we have our first look at what looks like the device in the flesh, thanks to ePrice and guess what? It looks just like the HTC One but…bigger. As they demonstrated with the One Mini, it’s clear that HTC want the same experience to be present regardless of size and the One Max doesn’t look like it’s going to be the exception, at least so far anyway.

Size wise, we can see that the One Max is actually quite a bit bigger than the original One, and much bigger than the One Mini. This is to be expected of course but, this newly leaked image does give us a closer look at the device. Which leaves us wondering just what the black square below the camera is? At this point it could be anything, and it’s even likely that it’s some sort of sticker used on pre-production devices.

More interesting than that however, is the row of three dots towards the bottom of the device. These look very much like the pins that were present on the HTC One X, albeit with fewer of them. These pins on the One X (pictured below) allowed it to be charged and docked with certain HTC accessories. 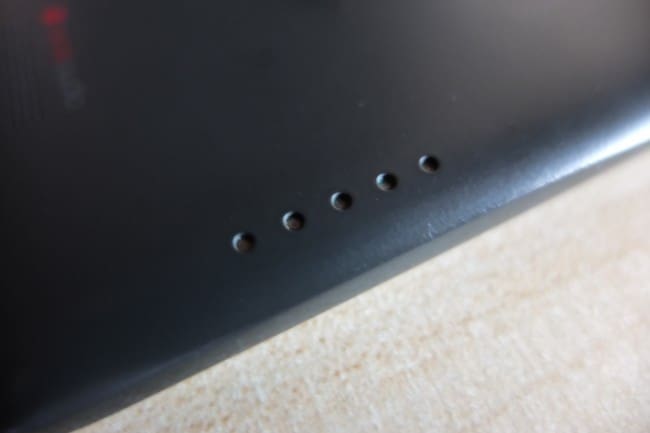 As you can imagine, there were very few uses for these on the One X but, maybe HTC is ready to make a go of it again with the One Max. Although, including them in just the One Max and not the One in the first place is a little strange to us. The One Max is obviously going to be going up against Samsung’s Galaxy Note III but, the popularity of the Note line has proven that size alone is not enough. It’s going to be interesting to see how HTC make the One Max stand out for more than just its size.