We have heard rumors of the HTC T6, and today we are getting our first look at it. Images of the HTC One Max have appeared online, via a Taiwan website called ePrice.

It would appear that HTC has been taking not of the success Samsung has had with Galaxy line of devices. HTC is on track to release smartphones in the One line, in several screen sizes. The HTC One Mini is smaller, with a 4.3 inch display. The HTC One Max that we are looking at here will have a 5.9 inch display. It’s designed to compete directly with the Samsung Galaxy Note II and upcoming Note III, as well as other large screen devices like the LG Optimus G Pro. 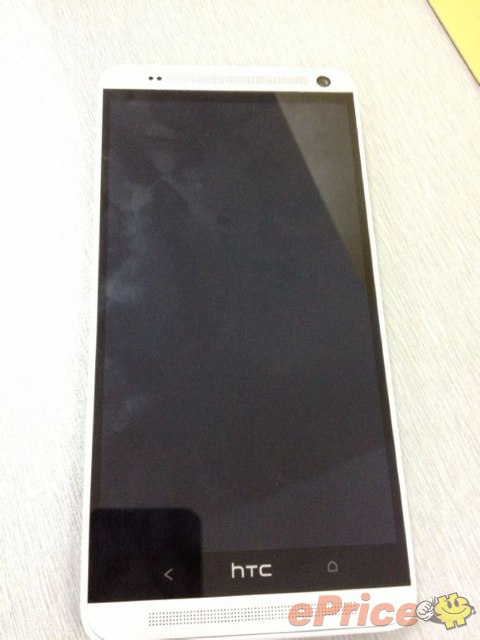 The Taiwanese site ePrice is telling us that the HTC One Max is in testing in China right now. HTC is going to be releasing three different versions of HTC’s new 5.9 inch smartphone. One is going to China Mobile, with TD-SCDMA connectivity. A second CDMA version is going to China Telecom, and a WCDMA variant will be made for China Unicom as well. We can assume that global versions will be made, but we don’t have word of any other models. We definitely want to see this big phone make its way to U.S. shores.

The HTC One Max is built similarly to its predecessors, the HTC One and HTC One Mini. It will have a thinner bezel though, which is almost necessary in order to make sure the large device fits at least somewhat comfortably in your hand. The 1080p Full HD display should look amazing. The One Max specs are definitely high-end.

We are assuming that the Ultrapixel Camera is the same as the camera in the HTC One and One Mini. The new smartphone is also likely to launch with Android 4.3, although it could come with Android 4.2.2 and be upgraded to Android 4.3 shortly after launch.

Are you a fan of these large devices? Does the HTC One Max excite you?