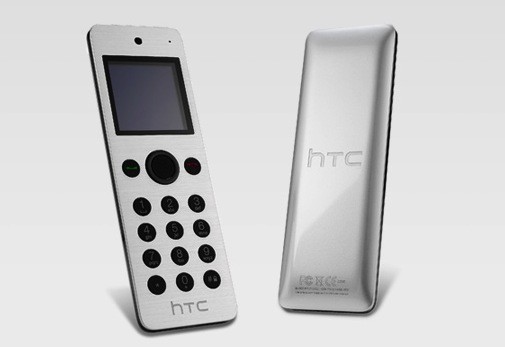 Do you like phones?  Well of course you do, that's why you're here in the first place, but I mean do you really like phones?  HTC has heard the hew and cry of millions out there clamoring for the HTC Mini, a phone for your phone that was launched earlier this year exclusively in China.  While the HTC Mini is actually more like a remote control for your phone rather than a full-fledged phone, it's still fun to poke fun at HTC's idea here.  Essentially HTC has made a smaller device with a 1.5-inch 128 x 128 pixel screen that links with your phone via Bluetooth 2.1, and allows you to do all sorts of things with it instead of your phone.  Thanks to The Unwired, we now know HTC will launch the HTC Mini+ in Europe and possibly more international countries as well, although no date or price is listed on the official site.

To put a positive spin on the HTC Mini+, as the name suggests it's an upgrade over the HTC Mini from earlier this year.  HTC is touting it as the ultimate "multi-tasking solution for everyone," giving you the freedom to take calls while using your phone to do process intensive things like watching videos and playing games.  Much like a smartwatch, the HTC Mini+ receives texts, emails and other notifications that you might be interested in and displays them on the tiny 1.5-inch display.  The Mini+ also has a built-in IR sensor so you can control TVs in the same way the HTC One allows you to do.  Since it's linked to your phone it doubles as a remote camera control utility and allows you to take pictures from your phone at a distance.  No more setting the phone up on a timer and hoping it doesn't fall or is facing the ground during that pivotal shot.  It's also got a built-in laser pointer for when you like blinding people on the street..I mean giving professional presentations.  You'll also be able to do this for quite a while, since the Mini+ includes a 320mAh battery, which is touted to give 9 hours of talk time and 95 hours of standby time.

Why would you ever want such a device?  HTC is betting that "hugemongous" phone they just sold you isn't comfortable enough, and while that's a debatable topic, HTC is at least giving the consumer options here.  Of course HTC could just make a full-powered smaller version of their flagship devices instead of selling something as silly as the HTC Mini+, but apparently that's not what people want.  Right now the phone is only listed as being compatible with the HTC One Mini, Butterfly S, Desire 200 and Desire 500.  It's likely that the HTC One isn't included because it hasn't received the update from HTC that enables use of the Mini+, which is ironic considering the One is HTC's largest phone. That's alright though, as an official leaked Android 4.3 update has already been uncovered for the HTC One, which will definitely give you the ability to phone while you phone.