We can safely say that HTC is not having the best year, although they released the amazing HTC One, their earnings for the 2nd quarter were minimal, and they’ve even said that they’re expecting a loss in the next quarter as high as an 8 percent.

Even with this, HTC has received some good news from comScore, who just released their MobiLens data for the second quarter of the year which puts them in 3rd place in the top smartphone OEM in the U.S. behind Samsung and Apple. 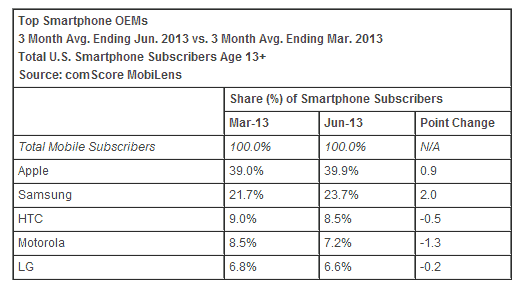 As you can see by the numbers, third place doesn’t mean that much with Samsung having an advantage of over 15% over them but still, it’s better than the rest. Apple remains as the top manufacturer with 39.9 percent, gaining 0.9 points from the last quarter. In second place we have Samsung, which is the one who gain the most with 2 points and now sits at 23.7 percent of U.S. smartphone subscribers. Despite being in third place, HTC actually lost half a point and only has 8.5 percent, with the top 5 being completed by Motorola and LG with 7.2 and 6.6 respectively. So even with Motorola right behind them, HTC still has a chance to retain that position because both companies lost points, so it’s not like Motorola is actually gaining on them. For the rest of the year, we don’t know what HTC will release except for the HTC One Max, although that won’t bring them too much attention, but Motorola still has to complete the rollout of the Moto X with MotoMaker being released to everyone outside AT&T and there are also rumors of Motorola making the next Nexus, we also know that the Moto X will have a Google Play edition and that they have more phones to launch for Europe, who’s not getting the Moto X. HTC is going to have to work really hard if they want to keep that position, because Motorola might just fly past them if they get caught off guard.

But that’s not all comScore has released, they also have data on top smartphone platform, at which Android is king with 52 percent of the total market share in the U.S. retaining the exact number from last quarter. Apple and iOS are in second place with 39.9 percent. The list is completed with Blackberry, Microsoft and Symbian, with Microsoft being the only one who gained a little but even that was just a 0.1 percent. Symbian is out of the picture and Blackberry is just a big question mark. They have 3rd place from the old Blackberries that are still out there, but can BB10 keep them in that position or they’re just going to lose it to Windows Phone? 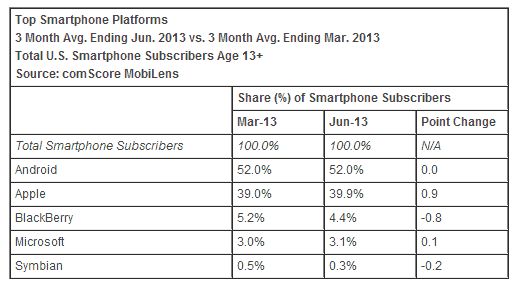 I think the new Nexus 7 and the upcoming new Nexus phone and Nexus 10, together with a new version of Android somewhere around October are just going to make that advantage even larger, specially if the rumors are true that it can run better and in older software.