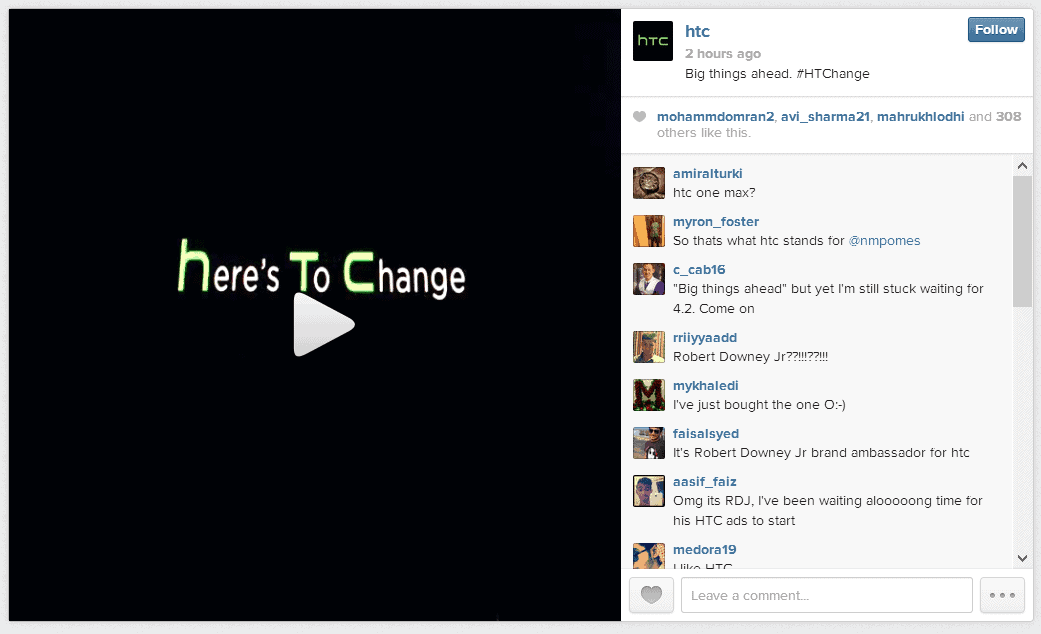 Well HTC has just crashed Samsung's Galaxy Note 3 party. Well not completely. Earlier today, we were sent an invite to Samsung's upcoming Unpacked: Episode 2 event on September 4th, which is taking place at IFA in Berlin. Where they are announcing the Galaxy Note 3. Now HTC has taken to both Instagram and Vine to tease something that's upcoming from the Taiwanese manufacturer.

The posts on both Vine and Instagram don't give a whole lot away, but it does show Robert Downey Jr. hoping out of a chopper and high-fives another person. The trailer is only 6 seconds long so there's not a whole lot given away, but it shows slogan of "Here's to Change" and "Happy Telephone Company". While the description says "big things ahead" along with the hashtag of #HTChange.

We don't know exactly what this is hinting at, but our money is on the HTC One Max. And not the announcement of the $12 million ad deal with Robert Downey Jr. The HTC One Max would be HTC's first "phablet device, or tablet/phone hybrid. We've been hearing rumors of this device for months now. It's supposedly going to have a 5.9-inch display still a 1080p Super LCD display along with the front-facing BoomSound speakers and pretty much have all the specs and features of the original HTC One. Although the HTC One Mini did get rid of the IR Blaster, which HTC said many people weren't using anyways. We're hoping that HTC puts a nice sized battery in there as well, since the display is going to be near 6-inches.

The HTC One Max, is one of those devices we've all been waiting on for quite some time. Because it'll be a big phone with a relatively solid build. Of course the whole "plastic vs metal" argument can be used here, but we'll skip that part. This could also be the beginning of HTC getting back into the tablet game, which they haven't been a part of since the Gingerbread era.

How many of you would be excited to pick up the HTC One Max? Let us know in the comments down below.