Turns out there wasn’t any huge secret regarding the Moto X announced today, it was the phone we expected, with the design we already knew and some of the features we’ve already seen with the 3 new Droids. The specs are not on par with current flagship devices like the Samsung Galaxy S4 or the HTC One but that doesn’t matter since performance seems to be quite good, at least on the benchmarks. In some tests it performed even better than the GS4 or the Nexus 4, and those are really speedy phones, so I don’t think there’s anything to worry about.

What’s the one thing that has the Moto X stand apart from all these other phones? The answer is easy: customization. You’ll be able to customize a lot of things about the phone, and even if for the moment the customization is exclusive for AT&T, the other carriers will get it eventually.

I’ve seen a lot of people wondering why Nokia is the only manufacturer doing crazy colors, why every Android phone is either black or white and now Motorola has come to save the day. Do you want a blue phone with white buttons? how about a pink device with red accents? sure, no problem and it will be delivered to you in just 4 days, free of charge.

Just how many combinations are for the Moto X? How many possible devices can come out of the factory in Fort Worth, Texas? The answer is an impressive 504 possible mutations of the Moto X.

That’s made possible thanks to 18 colors for the back panel, 7 colors for the accents, 2 colors for the front edges and 2 possible storage options, 16GB or 32GB. The accents will be for the buttons and around the lens, while the front colors will be only black or white. Think about it, 504 different phones coming out of the same factory, only 4 days after you ordered it, that’s an amazing amount of work and coordination to achieve. 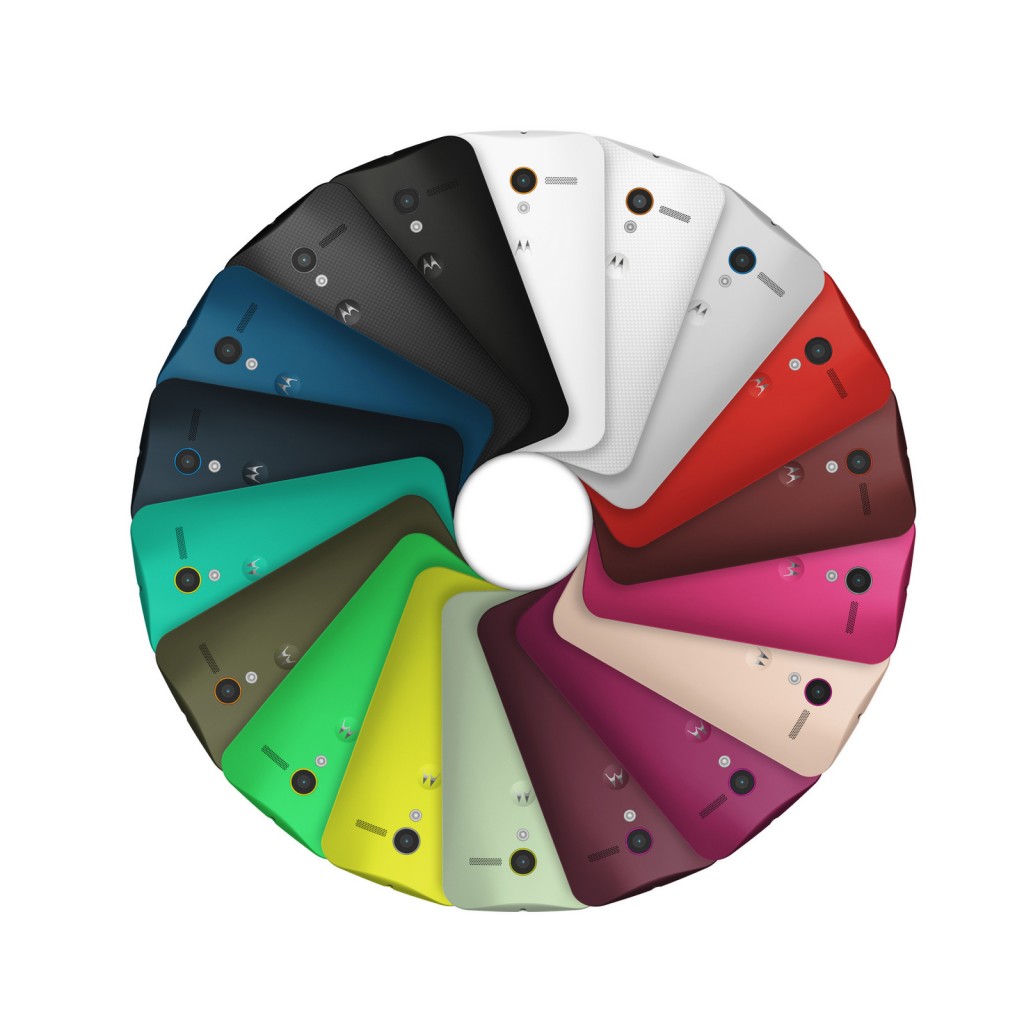 On top of this, you’ll be able to personalize your phone even more, with engraving on the back, your own wallpaper, custom splash screen and finally, you can associate a Google account right at the moment of order, so when you pick it up and take it out of the box, it’s already set up. I hope that these models come with a password already or you might have a security hole here. Things like engraving could potentially lower the resale value, but with so many backplates to choose, I don’t think that’ll be an issue for anybody.

The 504 options are just the beginning, Motorola said that new materials and options will be constantly considered and released, with real wood already been announced, to arrive some time in Q4 along with the engraving options. If done correctly, the possibilities are endless, aluminum, wood, kevlar, soft touch polycarbonate, glossy plastic, anything could be done. The white Moto X with wooden back from the picture below looks pretty nice to us.

The customization doesn’t stop here though, as Motorola has been busy creating an “ecosystem” of accessories that match the customization options of the Moto X. They’ve teamed up with SOL REPUBLIC to create a line of headphones, cases and docks among other things. Just for starters, with your purchase of a Moto X, you’ll get a pair of headphones with matching color to your device. They could be either the on-ear SOL Tracks HD or the in-ear SOL JAX earbuds, they even come with free ear tips for life. You can easily see how much thought Motorola has put into making their latest smartphone, your smartphone.

There’s one more thing: if you don’t like the choices you made, you can just return the device within 14 days (30 in California) of purchase. Then redesign one or get your money back. You can’t beat that, just order the phone, you don’t like it? Just return it like nothing ever happened.

We’ll have to wait and see what Motorola comes up next for the customization, but this sure looks like an amazing start.