Uncle Sam’s Department of Homeland Security put out a Roll Call Release on July 23, 2013 with bad news for the Android Operating System (OS). Their studies show that 79-percent of Malware targets Android, Symbian 19-percent, Apple’s iOS 0.7-percent, BlackBerry OS and Windows Mobile 0.3-percent each, and all others .07-percent. 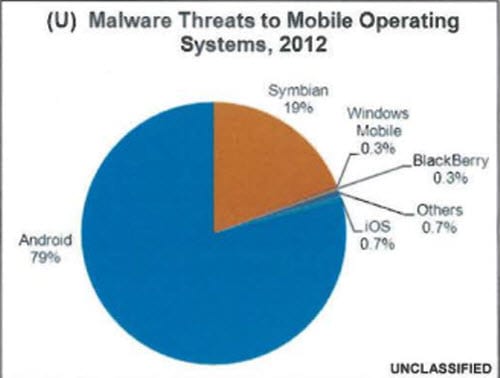 This unclassified document from Homeland Security points out that with more and more Android devices being used in government service, it is more important than ever to update your phone and software with any patches that come out for your device – sound advice whether you are using your phone for government work or as your personal device.

The report points out that:

Android is the world’s most widely used mobile operating system (OS) and continues to be a primary target for malware attacks due to its market share and open source architecture.

The report shows the Security Threat, Description, and Mitigation Strategy Homeland Security recommends. The three security threats shown are SMS (text message) Trojans represent nearly half the malicious applications are on older Android versions, but by installing a security suite many of these can be avoided. Rootkits hide their existence from normal forms of detection but may be detected and removed by installing the Carrier IQ Test, a free application. Fake Google Play Domains, are fake sites created to entice you to purchase and download apps from their site, so make sure you only download from Google Play or a safe site.

Those are the pitfalls of using the most popular and open OS in the world – criminals will always target the place where they have the greatest audience or chance of success. This Homeland Security Report points out by keeping your OS updated, you can avoid most pitfalls of malware. In addition, by downloading only from safe sites you can eliminate most malware before it even gets in your OS.