If you thought Google was done with Hangouts, think again. The folks at GigaOM has just gotten word that Google is in the process of upgrading to 720p HD video for hangouts and that a select group of people might already have HD video chat enabled. GigaOM got some information from Google on the latest Hangouts upgrade, which switches several protocols and uses more open standards so that Hangouts can eventually turn into a plugin-free chat service, now wouldn't we all love that?

As far as video is concerned, Google is dropping the proprietary, royalty-emcumbered H.264 codec for their own VP8. Back in 2010 when Google purchased On2 technologies, VP8 was acquired and open sourced. This new codec will require significantly less processing power, which Google is stating will enable most computers to handle 10 720p video streams at once. Additionally, it should also enable higher-quality, lower-bit-rate streams across the board. The H.264 plugin will still be supported for browsers that do not support VP8, like Internet Explorer, Safari and a few older mobile clients. 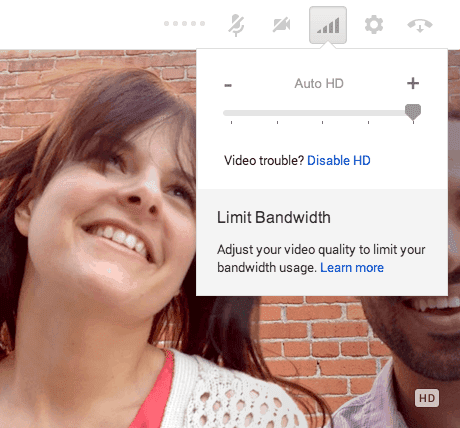 Next up for Hangouts is the switch to WebRTC, which is a browser-based video chat standard that was developed and open-sourced by Google. A combination of WebRTC and VP8 would allow Hangouts to function completely plugin-free in a modern browser. WebRTC has already been around for a couple of years, there are still a few obstacles in the way. Hangout's current feature set includes silly overlays like hats and sunglasses that use facial recognition to follow the users head around in real time. Which is fun to play with. Currently WebRTC can't do that, so there's still some more work to be done at Google.

Google's Vic Gundotra, who's the head of the Google+ project, said that HD Hangouts are available to select users now and should be rolling out to everyone in "the next few weeks". So be on the lookout for HD Hangouts. HD Hangouts will definitely make podcasts much more enjoyable, since it seems Hangouts has become the biggest platform for hosting podcasts as of late. Which makes sense since it's so easy to use not to mention it's free.