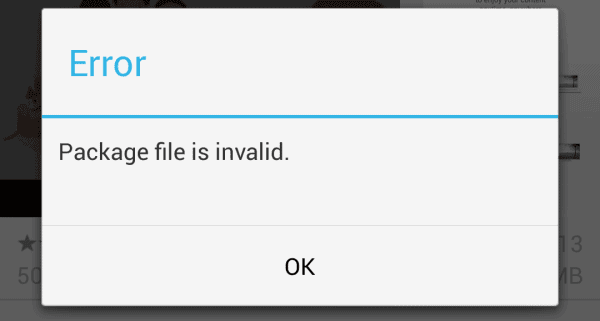 Last week, when Google began to roll out Google Play v4.3.10 we began seeing an error that occurred pretty much every time we wanted to download or update an app. I don't know about the rest of you, but it became very annoying very quickly. I've been having the issue on both my Nexus 4 and new Nexus 7, as well as other review devices I've been using in the past week.

Most of the time, these problems with the Play Store are isolated to the user. And a clear data, force close, or deleting and readding your Google Account usually fixes it. That's not the case with this error. The problem has to do with corrupted Play Store data, Google says that they are aware of the issue and are working hard to find a permanent fix for this error. Google has even added a new support page for the Package File Invalid error (#10230007). The company will keep that page updated as it learns more about the error and figures out a solution for it.

At this time there's really no fix. What I've had to do is revert back to an older version of the Play Store. Now you can do that by going to Settings, Apps, Google Play and Selecting "Uninstall updates". If you're on a device that doesn't have Android 4.3 you'll probably get brought back to a pretty old version of the Play Store. Luckily for me, I have Android 4.3 on all of my devices so it just reverted me back to v4.2.3 which had no problems (at least for me).

That's about all we know about the issue at this point. Once we learn more we'll be sure to pass the information along to all of our readers. I'm hoping we'll see a new version of the Play Store very soon, as I'm sure I'm not the only one that's tired of seeing that error. Especially when trying to download an app quickly.

How many of you have run into this error? Have you found a fix for it, whether it be temporary or permanent? Let us know in the comments down below.