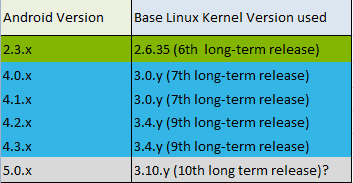 This one seems like the biggest jump, but it will be well worth it, if it will indeed come to Key Lime Pie this year. The biggest improvements to KLP will arrive from kernels 3.7 and 3.8, but also from the latest kernels 3.9 and 3.10.

I would’ve been very happy with those changes alone for Android 5.0, but the fact that it may arrive with the improvements seen in kernels 3.9 and 3.10 just takes it over the top. With the improvements in the kernel 3.9 we can expect better ARM support, and more improvements to the already great F2FS file system.

Then the kernel 3.10, the long term release that Google is going to use, will add even better ARM and 64 bit support, more improvements to the F2FS file system, better virtualization support, better encryption support for ARMv8 chips (which can encrypt stuff with AES up to 10x faster compared to the ARMv7 architecture), and lastly support for big.Little chips. This means more manufacturers will be able to use big.Little chips out of the gate with good performance, because even Samsung went through quite a bit of trouble with these types of chips, so making it easier for others to use it is great.

If Google will indeed add all the many major changes that have arrived in all the kernels up to 3.10, KLP is going to be one solid OS release, that should have not only great performance with lower specs, but also be more efficient in terms of battery life, and will continue Google’s quest to make it a very secure OS, after they’ve just added SE Linux in Android 4.3, something that should increase Android’s adoption in the enterprise later on.