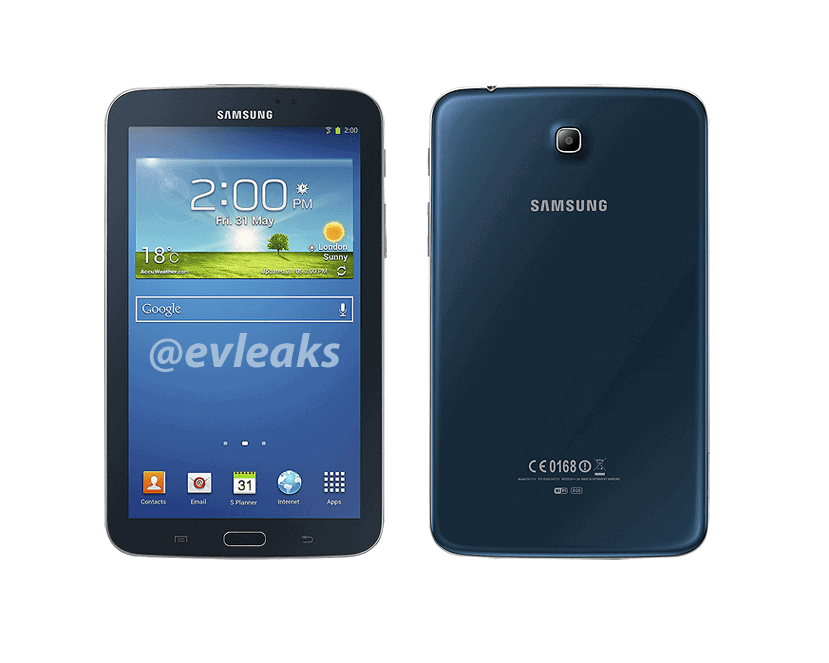 Our favorite leakster Evleaks is at it again. He was the first to reveal the Galaxy Tab 3.0 in its brand new blue color scheme. The Tab looks pretty svelte with the new paint-job. As you can see above Samsung decided to go with a nice muted blue. Now if only they could mute the garishness in touchwiz just a wee bit.

While the new color is nice, it doesn't do anything to compensate for the tab 3.0's woefully inadequate spec sheet. It comes with a measly 1.2GHz dual core processor, only a Gig of RAM and worst of all, a 1024 by 600 screen. One of the only real pros the Galaxy Tab 3.0 has, its micro sd card slot, is offset by the paltry 8 GB of on-board storage. After Android 4.1 is weighed down by touchwiz you'll be lucky to have 4GB of storage.

The Tab 3.0 simply cannot compete with its numerous competitors in the 7 inch tablet space. The new Nexus 7 absolutely blows the Tab out of the water in almost every aspect. Especially the gorgeous 1200p screen. If the extra $30 is too much, first generation versions of the Nexus 7 can be found all over the place for ludicrously low prices. Micro Sd card slots are on the way out, but there are many people who do not or cannot rely entirely on the cloud for storage. For them I would recommend the HP Slate 7. HP's budget tab can be had for significantly less than the Tab 3.0's $200 price point, and it runs a nearly stock version of Android.

So does this tablet make sense for anyone? Surprisingly enough, yes. The Tab 3.0 has a built in IR blaster, and Samsung's universal remote has gotten great reviews. So for those of you looking at some of those insanely expensive universal remotes, look no further. The features will likely be practically identical. As an added bonus you can select you channel, then proceed to ignore your TV while you read AndroidHeadlines on your tablet! Unfortunately for Samsung, much of the population isn't really looking for that experience, no matter how much they might like the color blue.