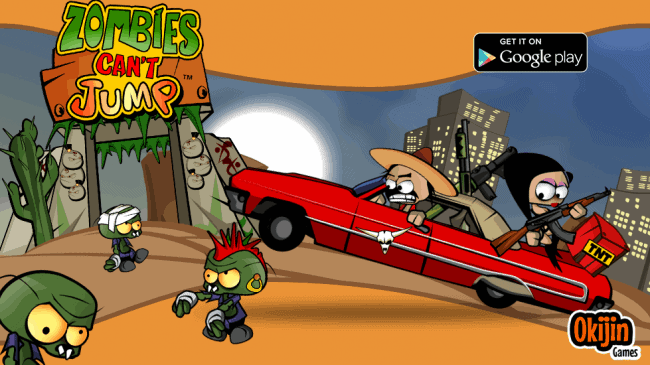 Just as there are certain mechanics in games that are used over and over again yet never fail to deliver a quality experience there are certain creative aspects. Zombies being one of the most recent trends for video games. With violence in video games reaching a high, most games that launch are controversial but, carton violence against hordes of the undead is perfectly fine. Not only does the media not seem to mind it but, we as gamers – casual or otherwise – love to see it over and over. Zombies Can't Jump is a fresh approach to tactical defense games that features Zombies but, is it worth your time and effort? Read on as we try to find out.

Description: In Zombies Can't Jump, you're fleeing the Zombie Apocalypse and you run out of gas. Thinking that a junkyard is the safe place to hold up you end up getting attacked by waves and waves of the undead. You control a husband and wife team from Mexico that have to defend themselves against the Zombies. You do this by building up crates for defenses, continually shooting wave after wave and controlling both characters in the right combination to not get killed. It's a nice blend of tower defense and shooter that works well. It's easy for casual gamers and hardcore ones to pick up and enjoy. Take a look at the trailer below.

How it Works: To start shooting some Zombies, hit up the Play Store to download the game and then you're ready to play. 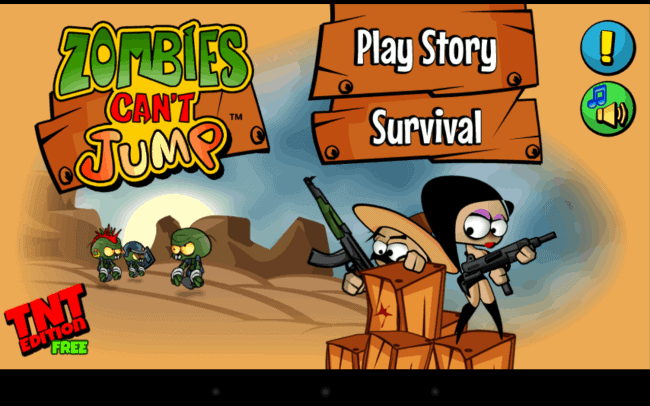 Playing level after level is done through the Story mode, to do so just hit Play Story. There's a tutorial that takes you though everything you need to know as well. 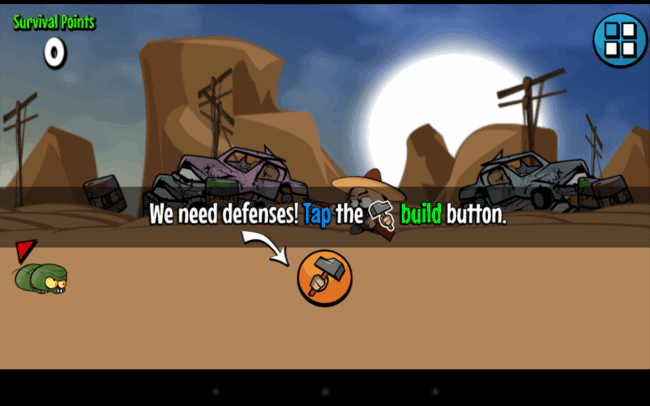 There are no finicky onscreen controls here, everything is done through touch buttons onscreen. You don't even have to worry about aiming. 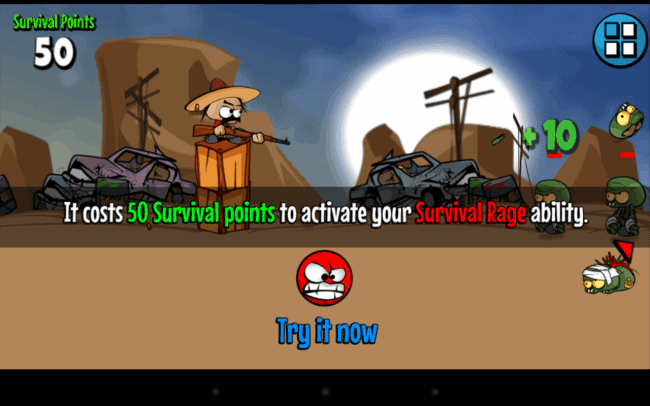 Survival Rage is something you'll use as you progress through the game. You'll know when it's available as you can simply hit the red-face to activate it. 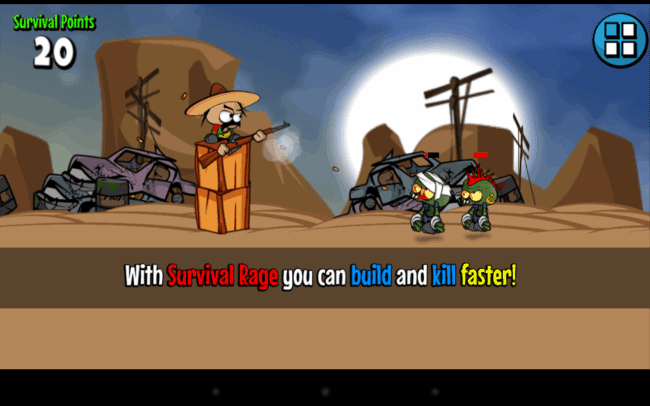 When you're in rage mode you will shoot faster, kill more zombies and build defenses quicker. 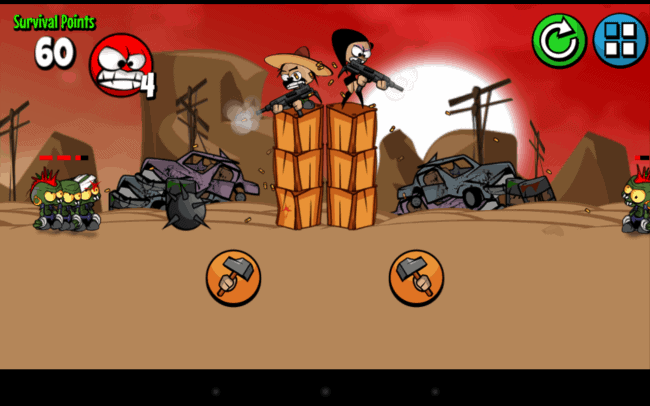 When juggling the two characters, you can only have one build while the other shoots. To change their shooting direction just tap either the left or right side of the screen. To move both, double-tap. As you progress, you unlock more weapons: 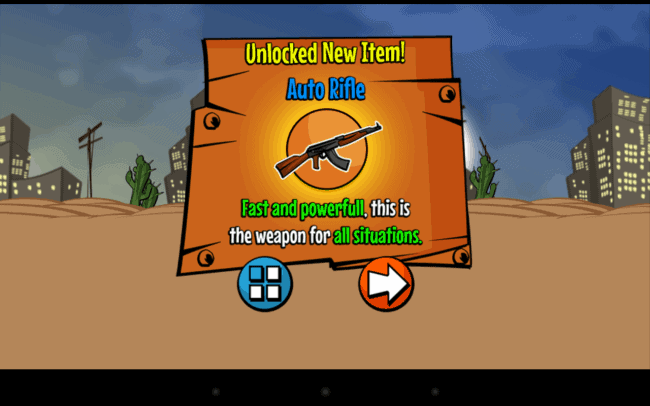 You also unlock metal crates and more as the game gets harder and harder: 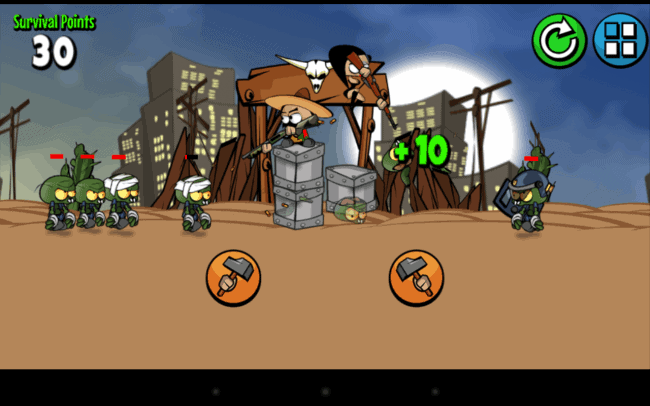 If you enjoyed this free version, why not consider the paid version for more fun? 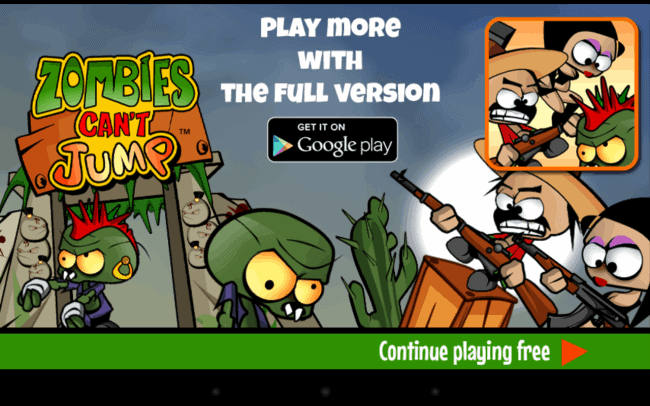 Opinion: Zombies Can't Jump is a game that everyone can pick-up and play. Sure, those that don't like violence might not take to the game but, this is no gore fest either. Blood is kept to a minimum and the cartoon graphics aren't too creepy-looking. In fact, the whole aesthetic of the game is perhaps what makes this so approachable. The gameplay takes on a familiar pace for most of the game but it can get quite tricky as you move on. It depends on how well you control each character but, time things right and you could breeze through most of the levels. The weapon unlocks are nice and give you some more tactics to work with. Overall, it's a great game that's easy enough for anyone to play.

Conclusion: All-in-all, Zombies Can't Jump presents itself as a game that's rooted in strategy but, doesn't take itself too seriously and will keep you playing for hours. Regardless of whether or not you're a casual gamer or someone who spends a lot of time gaming often, it's got enough going on to keep you hooked. If the gameplay style clicks with you then you could find yourself quickly getting addicted to the game. Survival Rage is a lot of fun and as you get to the later levels you'll be counting the seconds until you have to go it alone with slow weapons and hold on for dear life. Zombies Can't Jump is a game that everyone can pick-up and play, and should.