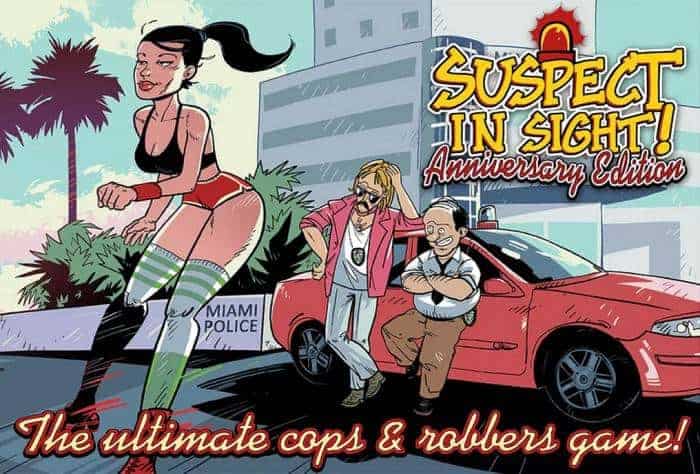 Ever since Grand Theft Auto launched, games have been trying to ape the formula that makes it so successful. In recent years, as smartphones and tablets have gotten more and more powerful, games have been taking cues from the 3D open-world Grand Theft Auto games like Vice City and San Andreas. These games have their place and can bring their own original moments as well. Suspect in Sight however, is a game that takes a whole new approach, while still bringing tongue-in-cheek humor and an adult theme to the table, without feeling like a "borrowed game". Read on to see just why Suspect in Sight is worth your time.

Description: Suspect in Sight puts you in the shoes of Rob, the most badass cop this side of a 1980s Action flick. You'll be charged with piloting his Police Chopper in order to track down the villains and good-for-nothings in three cities: Miami, Los Angeles and New York. With high-quality 3D graphics and fast-paced accelerometer based gameplay, Suspect in Sight is a great game for those looking for something a little different. Much like the original Grand Theft Auto, there's a top-down view used to great effect and it works well on Android smartphones and tablets. There are a whole host of missions to play through and it's up to you to protect these cities from criminals. Take a look at the trailer below to see what it's all about.

How it Works: Before you can go and join Rob on his quest to rid major cities of scum, you'll have to head on over to the Play Store to download the game. After that, you can suit-up. 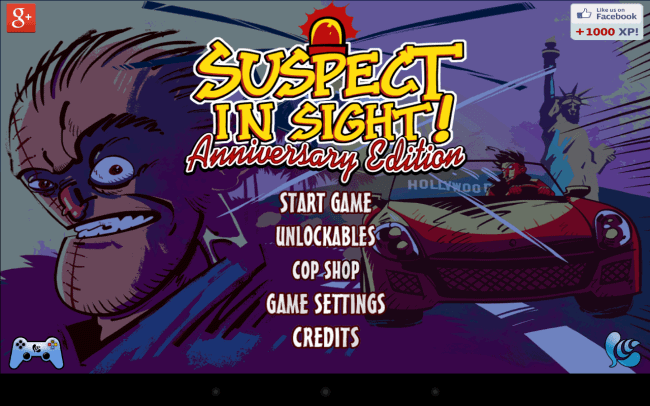 When you first start, you'll only have one city available to you: Miami. So go ahead and choose that one from the list. 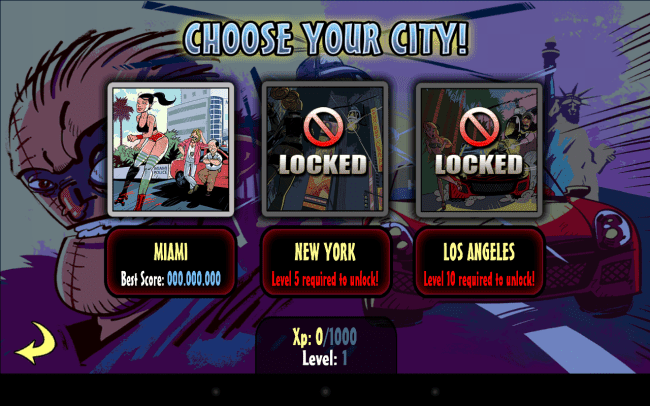 Once you choose Miami, you'll be given a sort-of comicbook to go through, which is pretty funny to say the least. 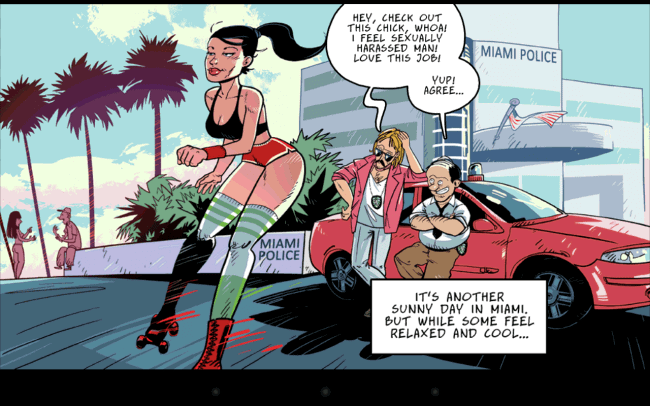 It's in this comicbook that you'll be introduced to our badass cop, Rob: 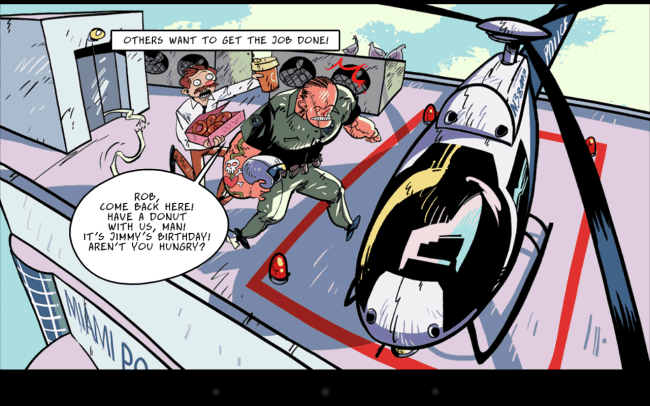 The humor just keeps on going as you meet your "helper" who's going to tell you everything you need to know about how to play the game. 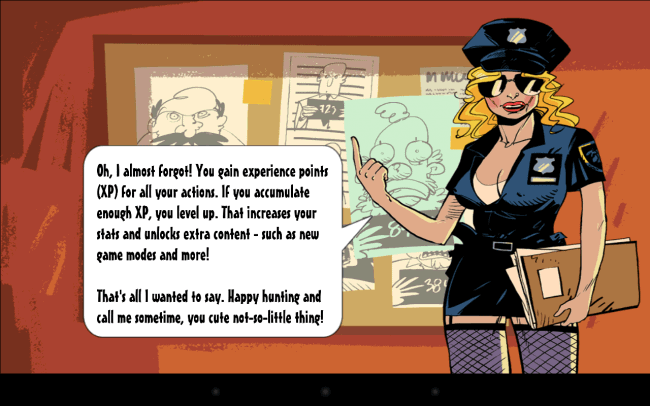 XP points are very important, and they make up a lot of the game so, you should really listen to Mona here. When you're in-game, your view will look something like this: 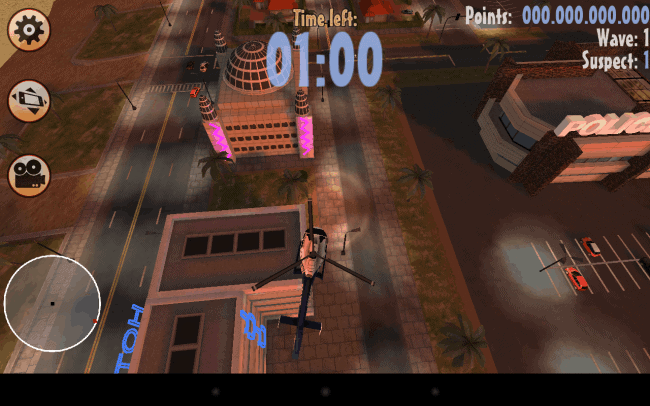 You control the helicopter by moving your device in the corresponding direction. The searchlight you see on the ground is what you'll be using to help the local PD catch those crooks running wild on the roads. You can see crooks on the mini-map in the bottom-left corner of the display in red. 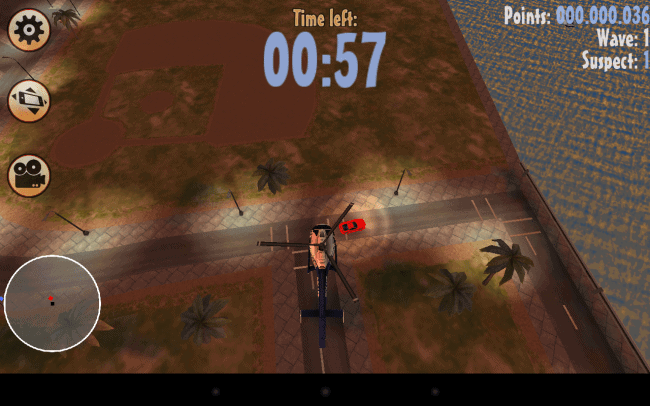 The red cars are the villains and when you find them you need to just keep the searchlight on the vehicle until the police turn up and bust the crooks. 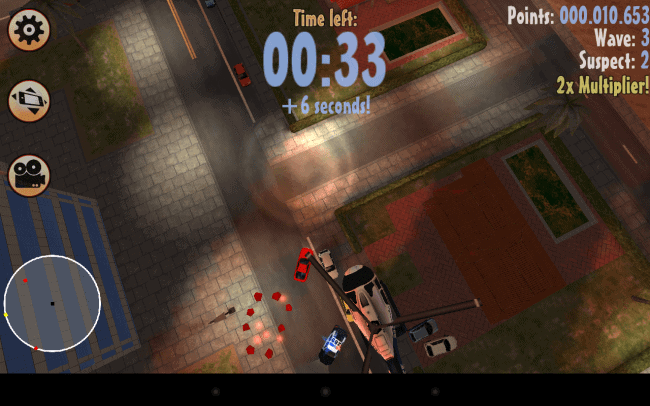 When you hit a car, you'll see gems scatter around the car and then just touch the gems to collect them. When a new mission becomes available, you'll have to fly to the exclamation point on the map, which is also the Police Department. 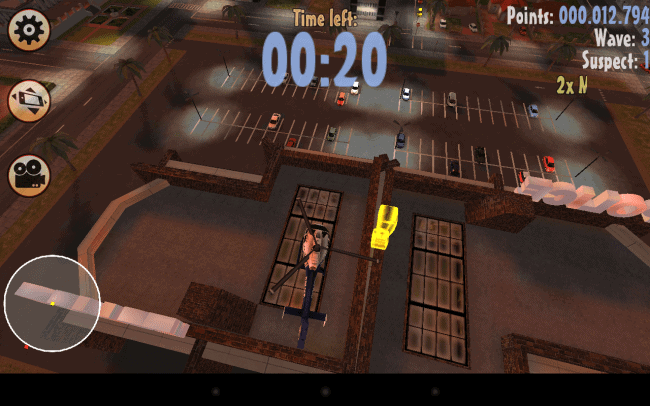 At the end of each level, you'll get a rundown of your progress. 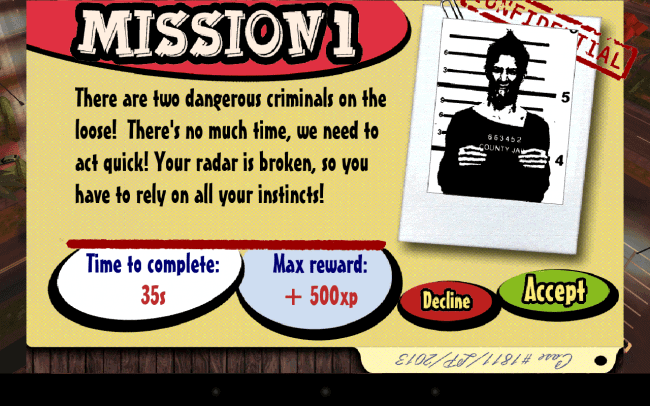 Opinion: Top-down view games might be considered "old" but, that's really not the case here with Suspect in Sight. For one thing, the graphics are brilliant and for another, the fast-paced action will have you wishing you had played more accelerometer games before this one. Onscreen controls are no fun, and we're glad that they're not present here, as they'd probably cause more issues than they would anything else. The game is very much a "pick-up and play" kind of game, with lots of polish and some great humor that will definitely put a smile on you face the first you play it. I really enjoyed my time with the game, and I just wish I was better with the accelerometer.

Conclusion: If you're looking for a game that's a little more mature to enjoy on Android, then Suspect in Sight is definitely that game. Don't confuse this with a full-blown Grand Theft Auto game, it's not that blatant but, you won't feel like a kid playing this one. There are some brilliant graphics, charming artwork and some side-splitting tongue-in-cheek humor. The use of the accelerometer is a nice touch as well, as it's something different and it works well with the top-down view. Piloting a helicopter is not easy but, after a few minutes playing Suspect in Sight you'll feel like a pro, as there's something really rewarding about being able to master flying as Rob, the badass cop. Go ahead and download the game, and let us know what you think of it in the comments.