If you’ve got children, you know how easy it is for them to pick up a smartphone or tablet and instinctively use it as you would. Sure, a lot of it is down to the fact that kids just take things as they come, but it can be pretty amazing to see just what kids get up to using smartphones and tablets. As parents though, it’s understandable that you want some sort of control and while making sure that your device has multiple users (in Android 4.2 or above) and turning off WiFi and such is great, it’s not enough. Curation of the apps and games your children can play is important and so too, is peace of mind. With Kids Zone App Lock, you can be sure that your little ones won’t use any app that you don’t want them to, and you can even limit there usage, too. Read on to see if this is the app you’ve been looking for.

Description: As the name suggests, Kids Zone App Lock does just that, it creates a kid-centric zone that locks out all other apps, except for the ones that you, yourself select. There’s no need to be rooted and everything is simple and easy to set-up. As well as this, there are some added features, too. Like the Chore Mode, which allows you to limit the amount of time (in minutes) that your little ones spend on the smartphone or tablet. The idea is that they can continue to play once they’ve done a chore or something you’ve asked them to do. So you can limit them to 30 minutes of Angry Birds and no more until they tidy their room, for instance. While the idea is that you use it to encourage them to do chores, you can also just use it to limit how much time the kids spend on games or using apps. Take a look at the trailer below for a quick overview.

How it Works: To start locking away your apps, and giving kids access to the games and apps you’d like them to play, you’ll have to download the app from the Play Store. If you like the app, you should consider the Pro Version, which offers a few more advanced features. Once you’ve downloaded the app, you’ll have to go through a quick and simple set-up process. 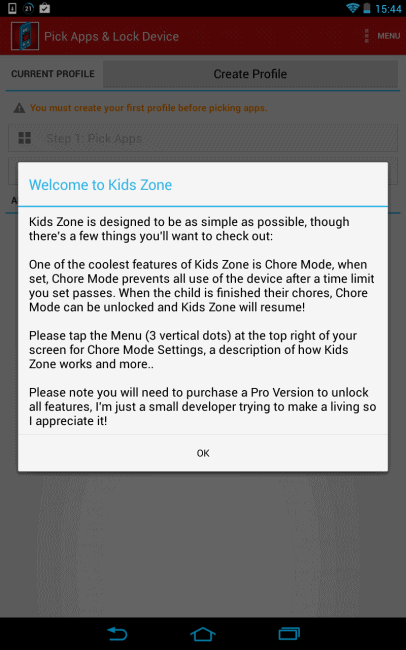 The set-up is quite literally only a few steps, and that’s it. You’ll first have to name a profile. You can have more than one, too so you can easily have a different profiles for different children. 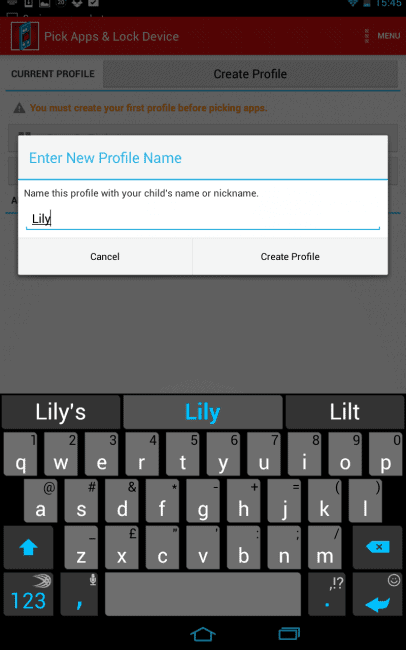 One you’ve named the profile, the next step is to choose the apps you want your child to have access to. 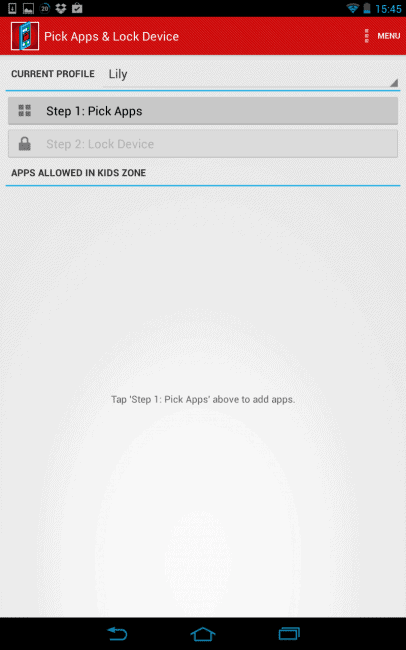 All you have to do is to select the apps or games you want. You can change these later on, or create a different profile. So don’t try and pick everything, essentially you’re creating an app drawer for the kids. 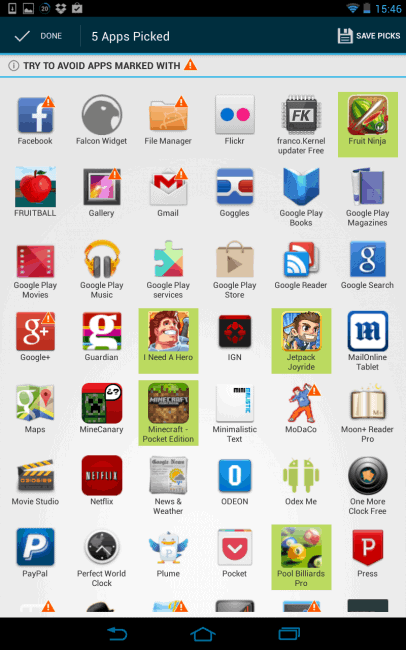 Once you’ve chosen the apps, you can lock the device with a pin and away you go. 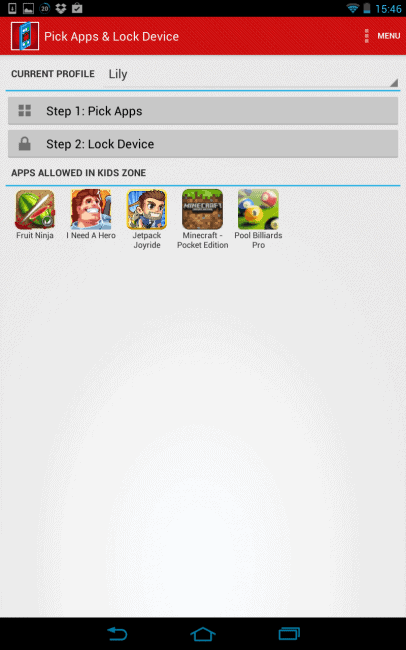 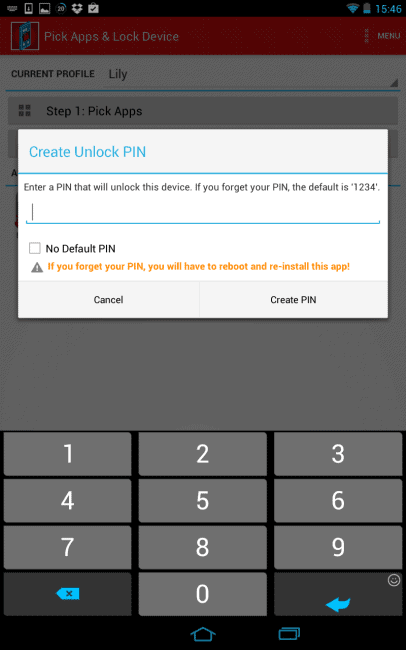 It’s a good idea to disable the default pin if your child is a clever one, because the default pin pops up when you want to unlock the device again. Once that’s said and done, you’re ready to hand the device over to the kids. As we saw earlier on, one of the games selected was Fruit Ninja, loading it up is quick and easy. 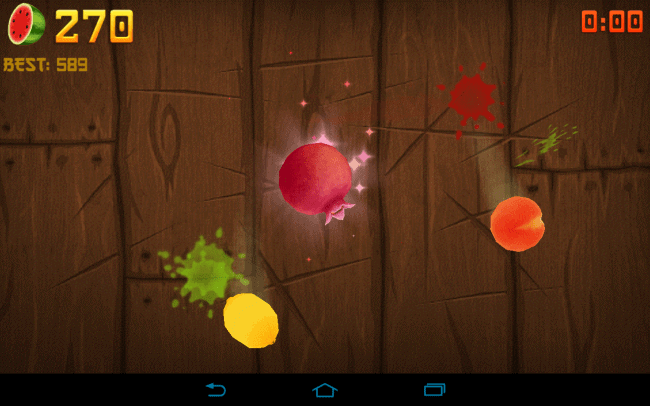 The advanced chore mode is essentially what you think it is. It encourages kids to do chores or homework or whatever, instead of spending masses of time playing Angry Birds or Fruit Ninja. It’s the best way to limit the amount of time your kids spend on the device, and you can set the rules. 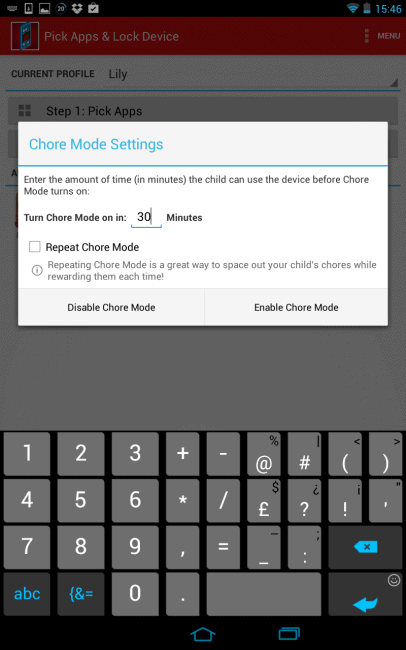 To get more out of the chore mode, maybe consider buying the Pro Version and supporting the independent developer. When you want to unlock the device, to get back to normal, just enter the pin and then exit the app, it’s as simple as that. 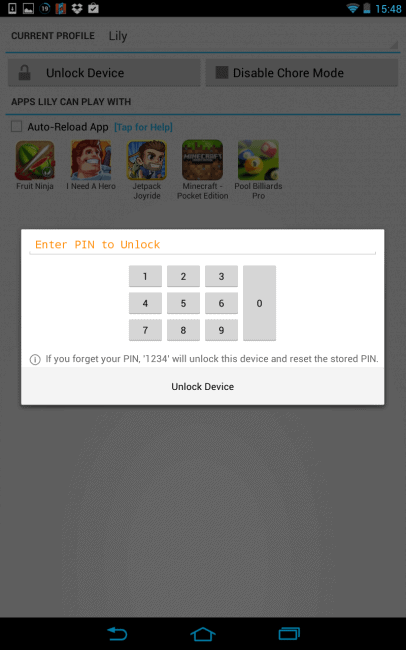 Opinion: Kids Zone App Lock is a really great idea. Sure, Android 4.2 and 4.3 sort of took care of this sort of thing, Kids Zone still has its place. For one thing, it’s super-easy to set-up and there’s very little needed from the user before they hand it on over to the kids. Everything is clean-cut and there’s no hassle. Being able to choose the apps and games that your kids can access is great. In my opinion, it’s great that this generation of children have more exposure to technology than we ever did when we were young but, boundaries need to be made. With this, you can decide how long your little ones spend in front of yet another display and you can make sure they only use the apps or games you want them to. For instance, you can have only educational apps set-up for one session and then games another if they’ve been good. Kids Zone App Lock puts the control back into parents’ hands and that’s exactly what’s needed these days.

Conclusion: While Kids Zone App Lock might not be the perfect solution to sharing your smartphone or android tablet with your kids, it comes very close. It’s incredible easy to set-up, it works without root or anything like that. Quite simply, it just works. For parents, the big thing here is that you can control and choose which apps the kids go on, which means you can curate the apps that your children use – without giving them the ability to go out and install what they want. It blocks in-app purchases, it stops browsing the web, it blocks call – yet still allows a quick and easy solution for parents to take a call – it blocks everything you want it to. The chore mode is a great spin on the age old timer. With this mode you can decide how long you want your kids to spend on the tablet or smartphone, you can even repeat chore mode if you like. Peace of mind is an important thing for parents and Kids Zone App Lock is one of the few apps that delivers it.