Skip to content
Trusted By Millions
Independent, Expert Android News You Can Trust, Since 2010
Publishing More Android Than Anyone Else
19
Today
122
This Week
874
This Month
3865
This Year
121472
All Time We know that the HTC One in the U.S. will skip Android 4.2.2 and will go straight to Android 4.3, but right now it’s stuck at version 4.1.2 which is now almost a year old. Thanks to a post on Twitter, as noted by Android Police, we now know that last year’s flagship the HTC One X is now jumping ahead of the One and is receiving Android 4.2.2 with Sense 5 in Europe. This is the Tegra 3 version of the One X and not the AT&T model which packs a Qualcomm Snapdragon processor. The update for the AT&T One X is probably in carrier testing and as we know that can take some time so be patient, the fact that Europe is getting it means that it’s safe to assume that the U.S. model will get it soon after. Both versions will probably even get Android 4.3 down the line but, HTC is now busy with this year model and preparing the launch of the HTC One Max.

Among other things, the update includes features like Video Highlights, Quick settings panel, new camera features and Blinkfeed, which can be disabled in the settings menu. You’ll also get small additions like battery level in the status bar or a new Lock screen style widget. 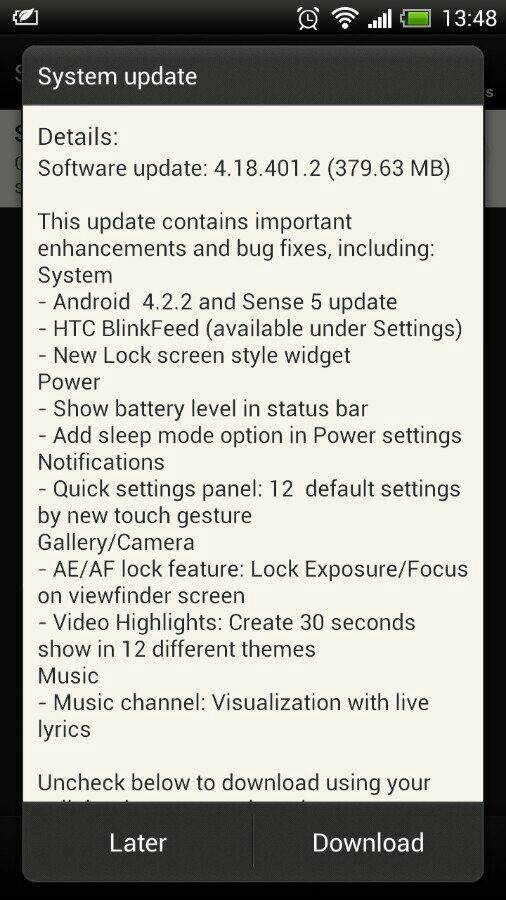 The 4.18.401.2 update weighs almost 380MB and while you might find a flashable ZIP around the web, I recommend you to wait for the OTA to arrive. It’s always safer and it shouldn’t take too long, the update seems to be rolling out to the entire continent.

Once again, remember this is for the Tegra 3 European model (codename Endeavor) and not the Qualcomm-based One X for AT&T, so don’t try to update manually because it’s just not compatible.

The HTC One X is a great device and probably the best smartphone launched in 2012 so it’s nice to see it’s still getting some love from HTC and I’m sure buyers will really appreciate this. Keep up the good work HTC, it will hopefully pay off and you’ll gain that much needed market share and if it doesn’t, you’ll always have Robert Downey Jr. to come up with new ideas.