A little over two weeks ago at a “breakfast” gathering, Google made several announcements. Most we were expecting, like the virtues of Android 4.3 and the sleek new Nexus 7 tablet, but then out of nowhere, they announced a $35 dongle called Chromecast. It sold out in record time and quickly became the “must have” gadget.

Chromecast does not really do too much at this point, but with the demand for the device, many new apps should quickly follow, making it a more useful tool. You can “cast,” or send items from your portable device, such as your smartphone, tablet, or laptop, directly to your television screen and sound system, much like a smart TV with built-in apps. You can cast anything on your Chrome browser to the TV, as well as use the apps for Netflix, YouTube, or Google Music & Movies.

CheapCast was developed by a user at XDA to emulate Chromecast and it essentially allows your smartphone or tablet to do the same thing via the CheapCast app rather than a dongle. You need to be on the same Wi-Fi network, of course, or you can connect your device to the TV via the HDMI out port, and then you can cast your YouTube, Netflix, and Google Music from any Android device you own. The experience is very similar to Chromecast in that you can name your devices. 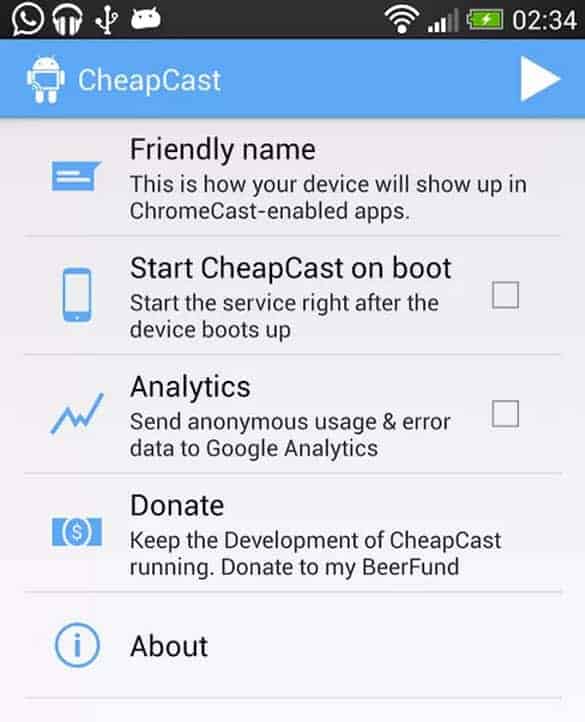 You can pick up the App in the Google Play Store now, but please remember that CheapCast is in its beta stages and the tabbing feature does not work. With the promise of more added features it is worth playing around with it…and, the price is right!

Check it out at the App store and leave us feedback on what you think of Cheapcast.