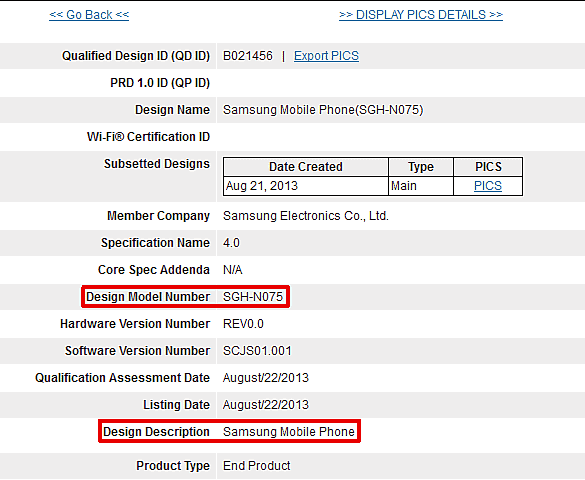 The internet rumor mill is hot for any news on the GALAXY Note 3.  However, after doing some research into reports that the Galaxy Note 3, bearing the model number SGH-N075, was headed to NTT Docomo… I remain unconvinced.  I believe the device to actually be a Tizen Smart Phone that was just one of several promised by both Samsung and NTT Docomo for 2013.

Looking at the NTT Docomo product page featuring both the GALAXY S4 and the GALAXY Note 2 you will find that the S4 has the designation of SC-04E and the Note 2, SC-02E.  There is an unnamed Tizen smart phone bearing the model number of SGH-N055 currently being tested by NTT Docomo. A leaked screen-shot of a Tizen debugging environment reveals that the up-and-coming Tizen device is in fact an SGH-N055.

Samsung had announced earlier that they planned on releasing new, competitive Tizen devices within the year [2013] and will keep expanding their lineup as market conditions permit.  This claim by Samsung was further solidified by a report that appeared in Japan's Yomiuri Shimbun newspaper.  It was reported that Samsung would in fact release a Tizen-based smartphone in Japan through wireless carrier NTT Docomo in late 2013.

This is all part of a calculated reaction by Samsung towards Google purchasing Motorola Mobility back in May of 2012.  Google was now entering the Android fray as both a software provider and hardware vendor.  Contrary to speculation by others in the tech news industry, it is unlikely that Samsung would simply wean itself off Android and embrace Tizen.  Samsung is in the business of generating lofty profits for its investors and a move to reduce hardware offerings on an OS that currently dominates smart phone and tablets would certainly stifle profits.

Tizen simply offers another revenue stream for Samsung and an assurance that Google deal fairly with Samsung and other hardware vendors when it came time to share updates in a timely fashion. In point of fact, it is widely believed that a visit by Larry Page, CEO of Google, was part of a diplomatic exchange to ensure continued partnership between the two giants of tech.