Skip to content
Trusted By Millions
Independent, Expert Android News You Can Trust, Since 2010
Publishing More Android Than Anyone Else
48
Today
88
This Week
550
This Month
6303
This Year
116281
All Time Today, Motorola has finally announced the Moto X. The phone that we’ve all seen what feels like a million leaks and rumors of. The device that has been hailed as Motorola’s return to form, the device that with bring Android to everyone. While we’re not sure the Moto X is going to live up to all that, it certainly comes close. It feels a little strange to call the Moto X the “iPhone” of Android but, that’s essentially what we have here, and then some. Motorola Mobility, now owned by Google, haven’t released a smartphone like this in years and it looks like the wait has been worth it.

Let’s take a look at the core specs shall we?

As you might have heard, the Moto X is going to be a device that’s available in a myriad of different looks. Well, the rumors and leaks certainly turned out to be true here as well. In the above photo, you can see the Moto X chilling out with a wood finish. The base model comes in either black or white, and then there are 16 different customizations available to you. Colors will be available at launch, with engravings and wood options coming in Q4 to the MotoMaker website (more on that later). There truly hasn’t been a device with as many different choices as the Moto X since the beginning of the smartphone market. As Motorola are saying, your shoes, your watch – everything matches. So why not your smartphone? With the Moto X, you’ll be able to get a smartphone that suits you. 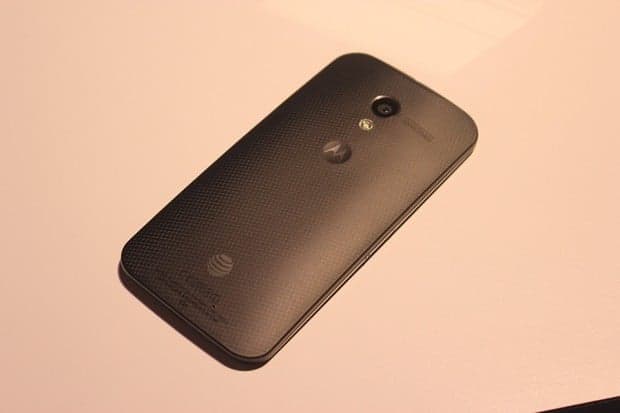 The internals of the device have been something that many of you have been questioning. Will it be good enough? Well, as we saw with the new Droid devices from Verizon, the X8 Mobile Computing System from Moto is more than capable of performing up to par. It’s got the same Adreno 320 GPU as the Snapdragon 800 and a dual-core Snapdragon CPU at the heart of it all. Combined with two other cores from Moto, the device is able to perform like any other flagship.

As for availability, the device is going to go on sale some time late August or September. It’ll be retailing for – on contract – $199 with 16GB of storage and $249 for 32GB of storage. The Moto X is going to be available on the following carriers:

Now, let me ask you – are you as excited as you thought you would be?