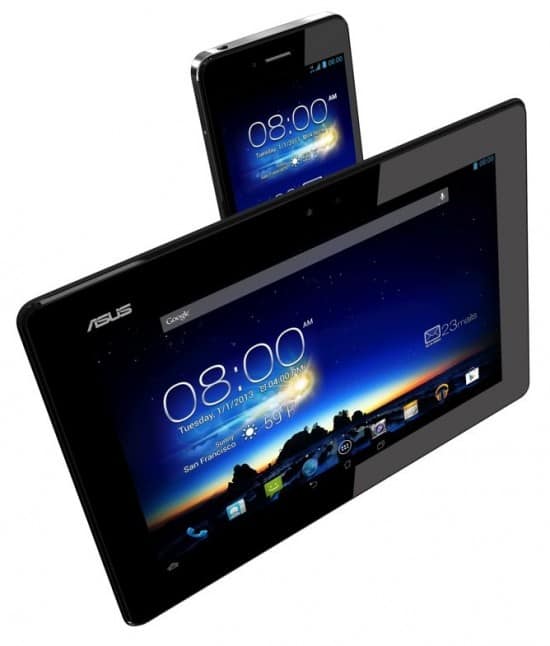 In a meeting ASUS held in France today, August 9th, the Taiwanese manufacturer announced that it is going to be consolidating its lineup of phones and tablets into just 3 lines of devices per category.  This is likely in a bid to not only strengthen its worldwide marketing and branding, but also to finally make that push into the US market.  We've heard before that ASUS wants to work its way into the US smartphone market, and was pinned to do so sometime in 2014.  While ASUS already has a fairly successful line of tablets here in the US in the form of the Transformer line and both Nexus 7 tablets, they have yet to really make an impact in the smartphone market.  Today's presentation, found by Android Community, has revealed the new lineup as well as two previously unannounced devices.

First up are the smartphones, which will now be branded either PadFone, FonePad or MeMoFone.  If you'll recall from previous devices in the PadFone series, these are standard sized smartphones that dock into an included tablet, giving the user more battery and a bigger screen whenever they feel like having such luxuries.  We saw the PadFone Infinity all the way back in February of this year, and looked like a great package at the time, although the specs aren't quite top-of-the-line anymore.  The FonePad Note FHD6 was announced more recently in June, and features a dual-core Intel Atom processor to spice things up a bit.  The FonePad HD7 is ASUS' ridiculous 7-inch tablet with phone support that will likely look a bit silly holding up to your head.  Still there's definitely a market for these devices if Sony has anything to say about it as well.  Finally we come to the two new phones here, the PadFone Mini and the MeMoFone HD 5.  ASUS is thankfully very descriptive with their naming conventions, and while we can guess that the PadFone Mini will be a smaller version of the PadFone Infinity, there's no telling if it'll have the same internal specs or same sized tablet dock as its big brother.  The MeMoFone HD5 is likely a mid-range phone with a 720p screen if the MeMoPad lineup of tablets is anything to judge this up-and-coming phone by. 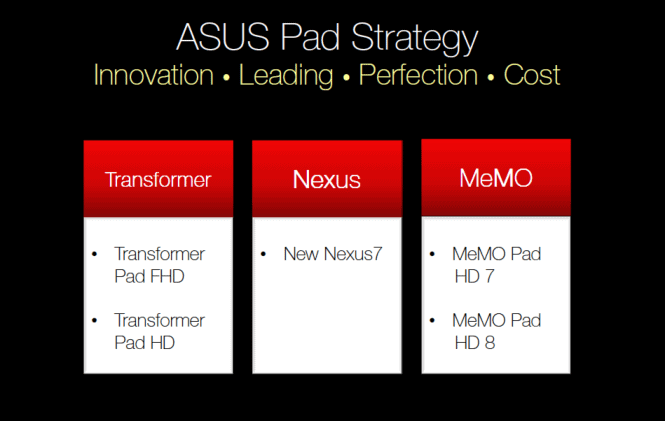 ASUS lineup of tablets now comes down to just three ranges as well: Transformer, Nexus and MeMo.  The Transformer line is their top-of-the-line specced tablets, while the MeMo line brings up the budget end of the spectrum.  We saw the incredible looking Transformer Pad Infinity announced in early June.  This is a tablet that features a 1600p screen, as well as the ability to output 4K video via an HDMI connector, and is powered by the Nvidia Tegra 4.  It's likely that the Transformer Pad FHD is this model, and the HD is probably a smaller 7 or 8 inch model.  We all pretty much know about the Nexus 7 by now, but what about ASUS budget MeMo line?  They look to be adding an 8-inch tablet to go with their current 7-inch lineup, and why not really?  Both MeMo Pads here will be lower end than the other two categories, but they also will no doubt be cheaper.  Seeing as how you can pick up a current generation MeMo Pad HD 7 for $150 around the web, we expect the MeMo Pad HD 8 to be comparably priced.