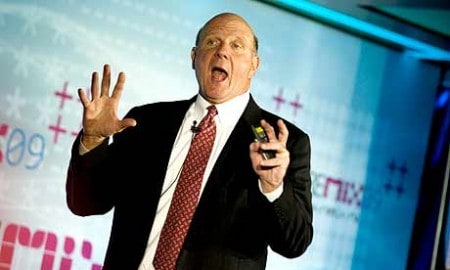 Whether you like Microsoft, Bill Gates, or Steve Ballmer, or loath them, one thing is for certain – things in the world of electronics be it computers, tablets, smartphones, or processors – they have forever changed the world we live in. Steve Ballmer and Steve Jobs have more in common than their first names, for better or worse, they helped change the way we look at the world and how we spend our "electronic" dollars. Losing Steve Jobs has had a bigger impact on Apple than they or Tim Cook would like to admit. Likewise, Microsoft will lose their greatest cheerleader against the likes of Apple and Android, as well as the internal fights to steady Microsoft's in-house struggles.

Back in July, Steve issued a press release that he was totally restructuring Microsoft from the inside out so they could better compete with the likes of Google and Apple:

Today, we are announcing a far-reaching realignment of the company that will enable us to innovate with greater speed, efficiency and capability in a fast changing world. Today's announcement will enable us to execute even better on our strategy to deliver a family of devices and services that best empower people for the activities they value most and the enterprise extensions and services that are most valuable to business.

The divisions within Microsoft were totally restructured with some people removed from their positions and others reassigned, all in an effort to allow them to react faster to changes in the market and to move away from desktop PCs to mobile devices and processors. It is a little too early to tell if the changes will be effective or not – in a corporation as large as Microsoft, even trying to speed up the process of change takes some time, or even if the new CEO will keep those changes.

It is difficult to say if this decision to step-down was entirely Steve's or if he is being "gently" forced out to make the company ready for their "new direction" that he spoke of in July. Certainly, Microsoft needed sweeping changes in the way they conduct business in today's mobile environment, as people leave their desktop PCs behind for ultra-notebooks, tablets, and smartphones. Whoevers decision it was, both Microsoft and CEO Steve Ballmer issued press releases announcing his step-down from the company. Steve said:

There is never a perfect time for this type of transition, but now is the right time. We have embarked on a new strategy with a new organization and we have an amazing Senior Leadership Team. My original thoughts on timing would have had my retirement happen in the middle of our company's transformation to a devices and services company. We need a CEO who will be here longer term for this new direction.

The board is committed to the effective transformation of Microsoft to a successful devices and services company. As this work continues, we are focused on selecting a new CEO to work with the company's senior leadership team to chart the company's course and execute on it in a highly competitive industry.

It should be very exciting to see if the changes at Microsoft can impact their tablets or smartphone sales or if they will concentrate more on mobile processors installed in other manufacturer's devices. Steve was certainly a "cheerleader" at Microsoft, however comments about the Android operating system late last year that you had to be a rocket scientist in order to use it, were a little far-fetched – one wonders if he actually believed what came out of his mouth at times.

Let us know if Steve's leaving Microsoft will help or hinder the corporate giant, and if you have any suggestions on his successor.