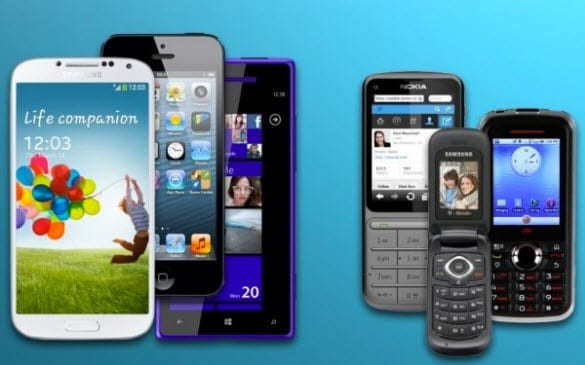 According to the latest Gartner study that ended the second quarter in 2013, smartphone sales have finally passed the feature phone and they should only continue to do so in the future. It was simply a matter of time, not so much because everybody wants a smartphone, the carriers do not offer but a few feature phones from which to choose. I know many people that are not tech savvy and simply want a basic phone, but carriers make their real money on data packages/plans that cost more with a smartphone. You cannot download a movie, access the internet, or send email on a feature phone, it is that simple.

Smartphones accounted for 51.8 percent of mobile phone sales in the second quarter of 2013, resulting in smartphone sales surpassing feature phone sales for the first time. Asia/Pacific, Latin America and Eastern Europe exhibited the highest smartphone growth rates of 74.1 percent, 55.7 percent and 31.6 percent respectively, as smartphone sales grew in all regions.

The research also shows that Samsung continues to lead in market share of worldwide Smartphone sales at 31.7 percent, up from 29.7-percent, followed by Apple's 14.2-percent, down from 18.8-percent in 2012. Apple did however, have sales of 32 million units, up 10.2-percent from last year. The reduction in market share is due to LG and Lenovo climbing the charts with a higher percentage this year. 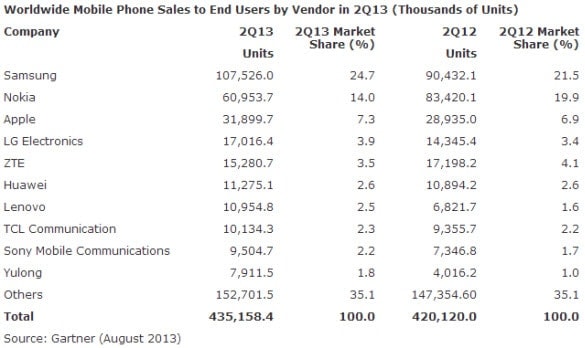 For years smartphones dominated in richer, more developed countries, due to the premium price they commanded and the more expensive monthly contracts. This study indicates that the largest sales growth was in the Asian, Latin America, and Eastern European countries, as all manufacturers, except Apple, are making a lower-end smartphone to attract sales and doing away with the featured phones. Faster growth in those areas could also signal that the UK, Canada, and U.S. may be starting to reach their saturation point as far as smartphones…almost everybody has one.

Sales by Operating Systems (OS) show that Microsoft took over BlackBerry for the first time to become the third most popular OS for smartphones, grabbing a 3.3-percent share. Android easily stayed in first place grabbing 79-percent of the market share, while Apple is in a solid second place with 14.2-percent. One noteworthy item is Lenovo, that just recently joined the smartphone market, grew 60.6-percent from last year. Lenovo currently relies heavily on their home market of China, but have announced that they will start to expand across the globe and into the U.S.

Let us know in the comments if you still use a feature phone and if you are looking to jump up to a smartphone.