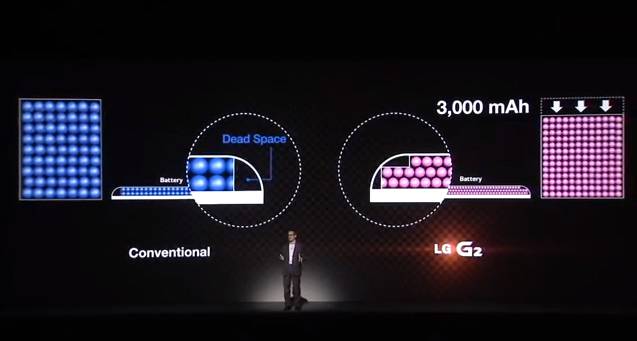 One of the other specs that people were delighted to see on the G2 was the battery capacity which is 3000mAh in size. Which is a pretty big battery, even though the device is powered by a Snapdragon 800 processor which is clocked at 2.26GHz. Along with the 5.2-inch 1080p IPS display. Since LG went ahead and moved the buttons to the back of the device, G had to go ahead and redesign the battery for the device. Mostly because those buttons would take up more space on the back.

If you look at the image up above, you'll notice that LG's G2 battery uses a "step design" which takes advantage of more space inside the handset than most other batteries do. The battery density has also been increased in order to improve battery life, says LG. While we're talking about battery life, the G2's display is expected to use less power as well thanks to the Graphic RAM feature that LG included. Better display using less power? How can we say no to that?

On top of all that, the battery is also removable. So I'd expect to see some very "extended" batteries for the G2 in the next few months. Lately, Zero Lemon has been pretty popular for extended batteries and they have a  9300mAh for the Optimus G Pro, so I'd expect something around 8000mAh for the G2. Since it is bigger than the Galaxy S4 which has a 7500mAh battery available from Zero Lemon.

It's nice to see LG cramming as many mAh's into a battery as possible. Their users are definitely going to love that. How many of you are glad to see a rather large battery in the LG G2?