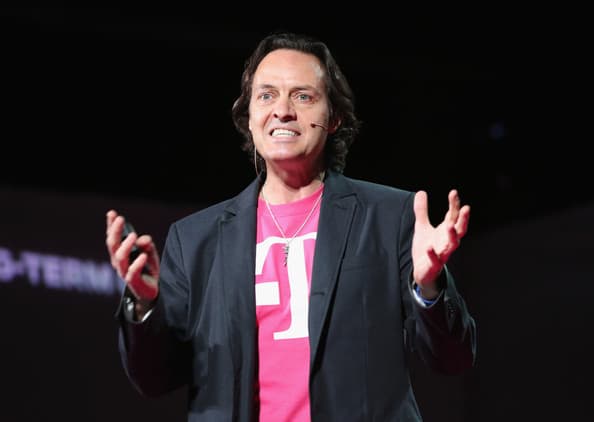 On Wednesday, John Legere and Neville Ray took the stage in NYC to announce a few new things for T-Mobile. Who is currently the fourth largest US carrier. They announced Jump!, which is the program I am the most excited for. It allows you to go ahead and upgrade your phone twice a year. Yes there's a monthly fee, and it's $10/month. But let me explain. The $10/month also includes insurance which is $8 and $12 a month already. So you're basically getting it for free. You'll be able to upgrade twice a year. It doesn't have to be every 6 months. An example that was given was you can upgrade in May and then in June, but you'll have to wait until May to upgrade again. Sounds really awesome right? This is something I hope really works great in this industry.

Next up, T-Mobile announced that they have met their LTE goal of hitting 100 million people by mid-year. As of today, they are covering over 157 million people in the US with their 4G LTE network. Which is about 110 different markets. I've been using 4G LTE here in Detroit for a few weeks now, but it's now launched here and in many other cities. T-Mobile is saying their average download speeds are 10-20mbps. Which is about what I've been getting. Actually I haven't done a speedtest lower than 20mbps. Additionally, T-Mobile announced the Nokia Lumia 925 and the Xperia Z which are both 4G LTE enabled.

T-Mobile also announced a new Simple Choice plan for family lines. A family of four can now get a plan with T-Mobile for $100/month which includes unlimited text and minutes with 500MB of data. This also includes no credit-check, so that means you'll be buying your phones outright. But that's still a pretty crazy price for four lines of service. That's about $100 or more per month savings over the other three carriers. Keep it up T-Mobile.

As a T-Mobile customer, today's announcements really got me excited about what's next for the carrier. Jump! goes live on Sunday, July 14th, and I'll definitely be enrolling so I can upgrade my phone every 6 months. As a writer, I have to have the latest. Okay, maybe not a need, more of a want. How many of you are excited about T-Mobile's announcements today?